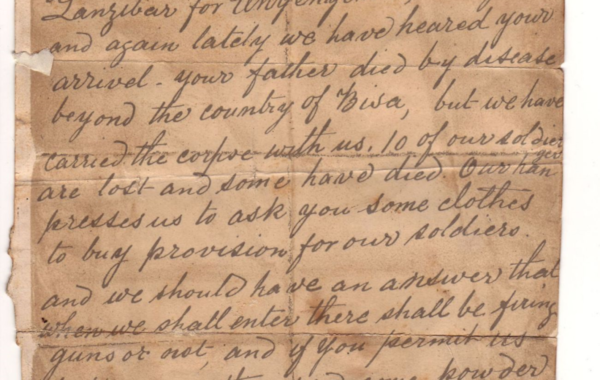 Ahead the anniversary of the death of Scottish explorer David Livingstone (1813-1873) on 28 April, a rare and unique African manuscript with the only handwritten eyewitness account of Livingstone's death has been published online.

Ahead the anniversary of the death of Scottish explorer David Livingstone (1813-1873) on 28 April, a rare and unique African manuscript with the only handwritten eyewitness account of Livingstone's death has been published online by Livingstone Online, a digital resource dedicated to the famous explorer.

Born on 19 March 1813 in Blantyre, Lanarkshire, Livingstone became one of the best-known explorers of the Victorian era. In 1855, he became the first known European to see Victoria Falls, and gave the Falls their European name. Sixteen years later journalist and explorer Henry Morton Stanley is said to have greeted him with the words, 'Dr. Livingstone, I presume?' - a phrase that continues to be used in popular culture almost 150 years after Livingstone's death.

The handwritten manuscript - a set of diary pages - is from Jacob Wainwright (c.1849-1892), one of the African attendants who accompanied Livingstone on his final journey in Africa and served as one of the pall-bearers during Livingstone's funeral in Westminster Abbey. The excerpts from the manuscript, released this week as a set of images plus detailed transcriptions, consist of two diary entries that total 11 handwritten pages of text and were written in 1873 and 1874.

The discovery of the pages is the first time that any part of the diary in English and in Wainwright's own hand has come to light in the last 150 years. Wainwright's full diary has been known of since 1874, but only in the form of the German translation; any version of the original had been thought lost.

Who was Jacob Wainwright?

Jacob Wainwright was a member of the Yao ethnic group from East Africa. In the first part of his life he was captured by Arab slave traders, but won his freedom thanks to a British anti-slave ship. He was given a new name and educated at a Church Missionary Society school near Bombay (now Mumbai), India. Later, he became part of the expedition that Stanley organized to find Livingstone. Eventually, Wainwright joined Livingstone's party as an attendant.

Wainwright composed the diary while these events were happening, thereby making this the only handwritten eyewitness account of Livingstone's death. These events and the final manuscripts helped establish the legend of David Livingstone.

The diary manuscript comes from the David Livingstone Birthplace Museum in Blantyre, Scotland, which centers on Livingstone's childhood home. The diary is being released while the Museum is undergoing the £6.1 million Birthplace Project, funded by National Lottery Heritage Fund, Historic Environment Scotland, and the Scottish Government. The diary pages will be put on prominent display as a star attraction when the renovated Museum reopens to the public in 2020.

For further information on David Livingstone and the Birthplace Project visit the website.

Professional Wisnicki, who led the One More Voice initiative said: "The One More Voice initiative focuses on recovering and publishing original nineteenth-century documents like Wainwright's diary. Although original diaries by British explorers survive in relatively large numbers, those by the individuals from the non-European cultures who accompanied British explorers are exceedingly rare. Such manuscripts are even more rare when they are written in the hands of those individuals themselves, as this manuscript partly is. The diary excerpts are of exceptional importance as they offer Wainwright's account of Livingstone's death in 1873, the only handwritten eyewitness account of the incident."

The publication of the diary pages has been made possible by Livingstone Online's new One More Voice initiative led by Professor Adrian S. Wisnicki, University of Nebraska-Lincoln, who specializes in applying digital methodologies to the study of historical manuscripts. Anne Martin, an archivist and Associate Director of Livingstone Online, unearthed the previously unknown manuscript.