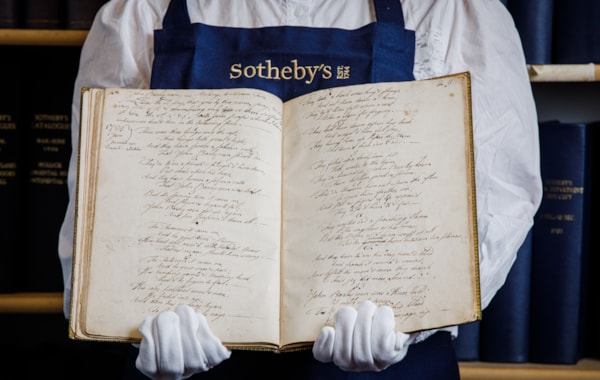 A compendium of material written by a young and unknown Robert Burns and last offered for sale in 1879 is one of the literary treasures to be auctioned by Sotheby's in July.

Two auction lots featuring the work of Robert Burns and Sir Walter Scott are among the highlights of part 1 of Sotheby's' Honresfield Library auction in July.

The Honresfield library was assembled by William Law (1836-1901), augmented by his brother Alfred Law (1838-1913) and their nephew Sir Alfred Joseph Law (1860-1939). The library’s cornerstones are world-class holdings of the Brontës, Robert Burns, and Sir Walter Scott, on which is built a remarkable collection with highlights venturing well beyond the core of 18th-19th century British literature.

William and Alfred Law had a deep interest in earlier English literature, represented here most prominently by a complete copy of Shelton’s translation of Cervantes (1620) and John Heywood’s Woorkes (1566). A 15th century Book of Hours with 15 miniatures is the earliest item in the sale. Beyond these highlights, the sale includes a wide range of fascinating 18th and 19th century books, carefully chosen by a discerning Victorian collector, and often with important earlier provenance and bibliographical significance.

The auction includes the most important manuscript by Scotland’s national poet, Robert Burns, in private hands. A compendium of poems, notes and ideas put together by Burns as an unknown 24-year-old, First Commonplace Book offers a unique insight into the bard’s mind. It was last sold at Sotheby’s in 1879, for £10. The collection also includes other individual handwritten manuscripts of Burns’s poems and original letters to friends, family, patrons and lovers which build a picture of his colourful life. 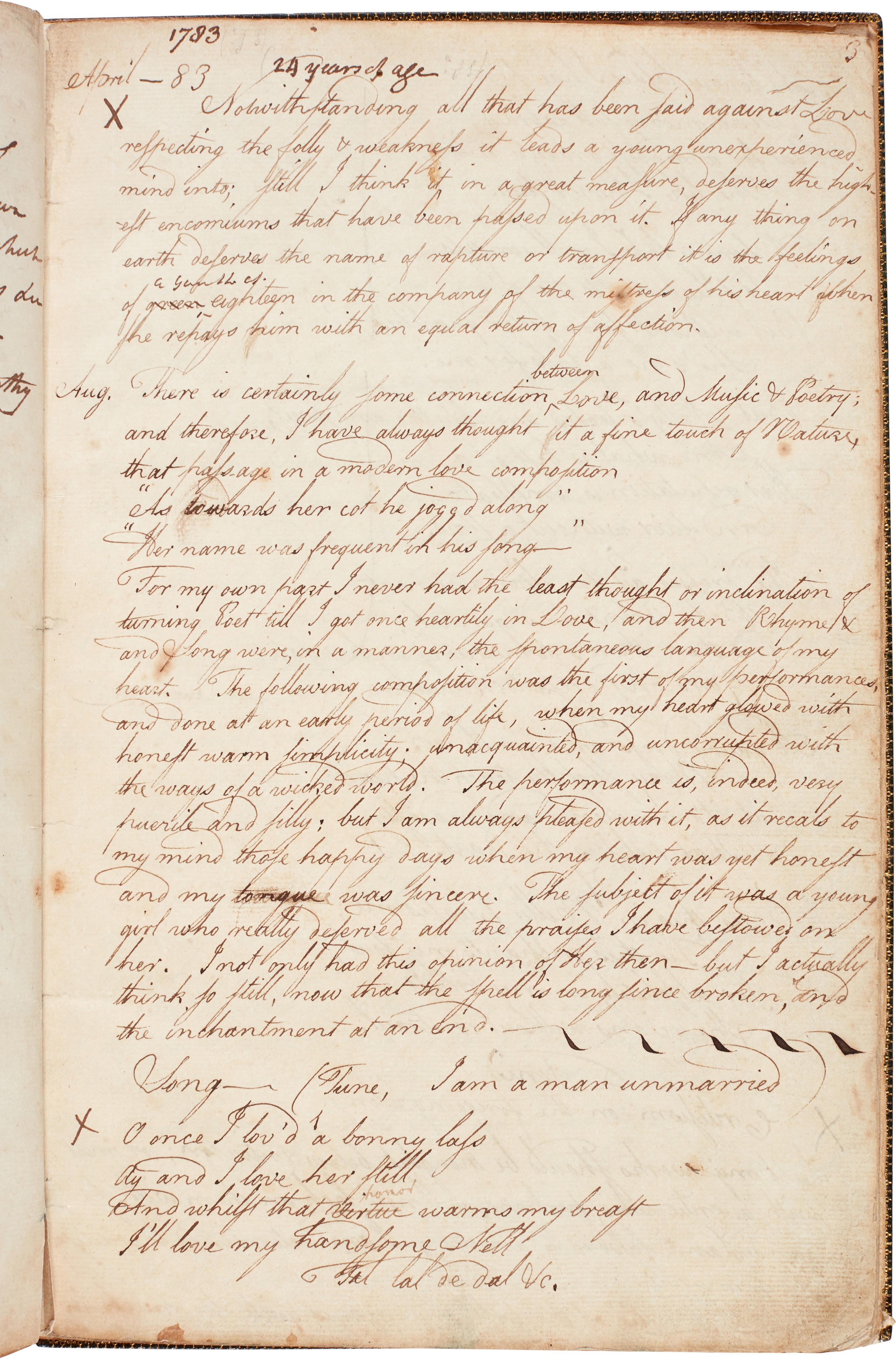 Romantic writer Sir Walter Scott – the second-most quoted writer in the Oxford English Dictionary after William Shakespeare – is also represented, most notably by the complete manuscript for Rob Roy, one of the last remaining manuscripts of a great 19th century novel that is not now in an institution. 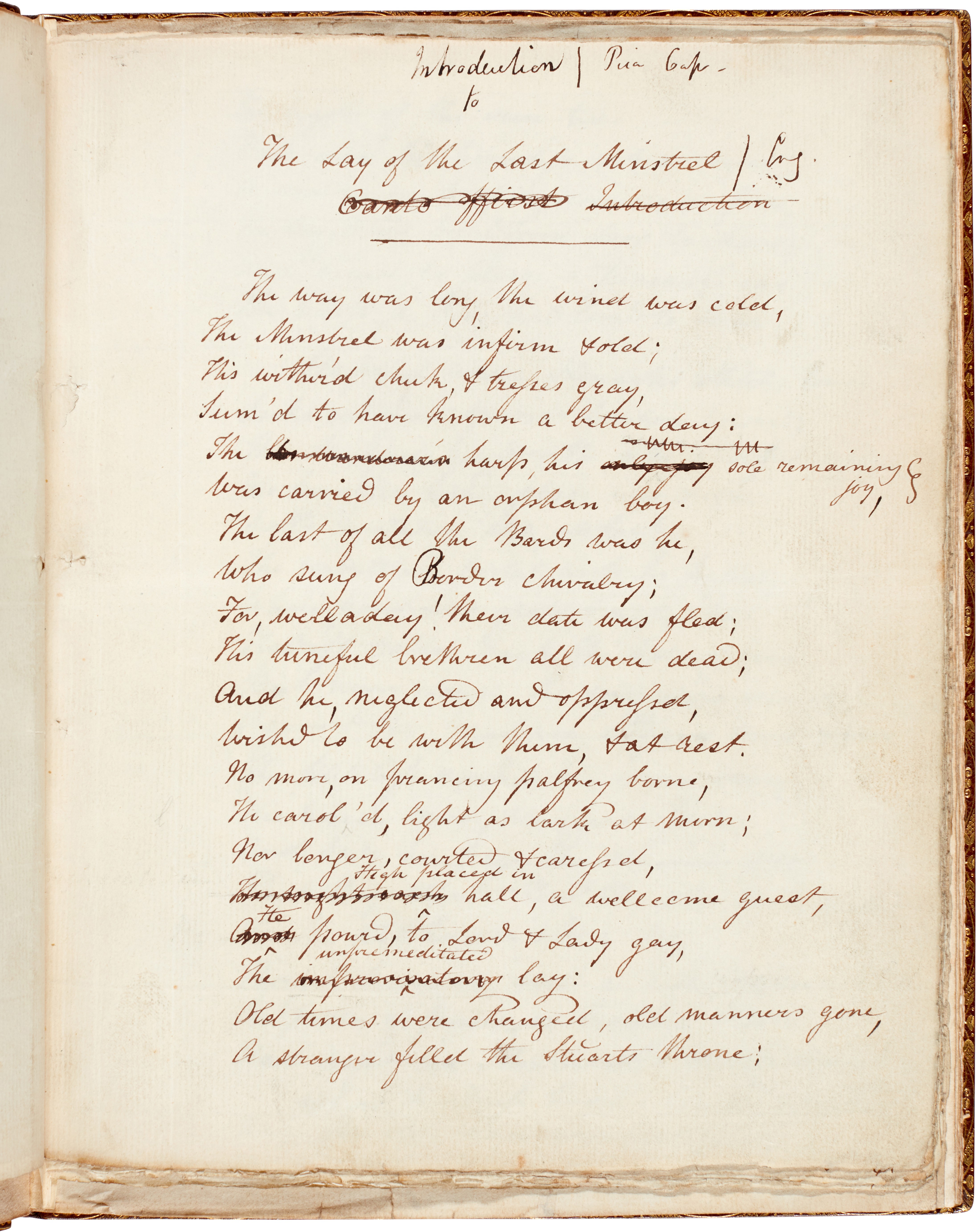 The Lay of the Last Minstrel, Sir Walter Scott

Dr Gabriel Heaton, Sotheby’s English Literature & Historical Manuscripts Specialist, said: 'Sotheby’s has been bringing books together with collectors for more than 275 years, and the Honresfield library is a fitting tribute to that age-old tradition. Showcasing the depth of the literary interests of Alfred and William Law, the collection as a whole paints a unique portrait of the passions of one of the greatest and least-known collecting families from a golden age of book collecting. When the library went missing from public view in the 1930s, many assumed it had disappeared, and to now play a role in bringing it to a wider audience is a true career highlight.'

The 500+ historic manuscripts, first editions, letters and bindings will be offered across three auctions at Sotheby’s, commencing this summer (first auction open for bidding from 2-13 July 2021). The public will get the chance to view the library, with exhibitions of highlights to take place in London, Edinburgh and New York.