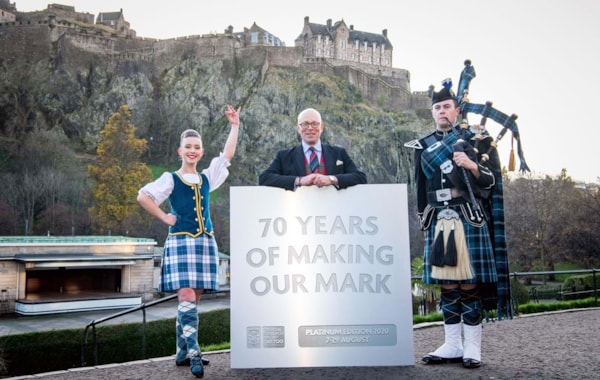 The 70th Royal Edinburgh Military Tattoo will be titled 'The Platinum Edition', with tickets on sale from 2 December 2019.

The show will pay homage to the Tattoo’s sustained legacy in Edinburgh over the past seven decades, including its enduring ability to link the Armed Forces with society.

The 2020 show will commemorate the maritime heritage of the Royal Navy and tie into Scotland’s Year of Coasts and Waters. The Royal Navy, known as the Senior Service for being the eldest of the British Armed Forces, is the lead for 2020. They will join an international cast of more than 1,000 for a 100-minute programme set to music and beautifully lit on the Castle Esplanade.

Launching ‘The Platinum Edition’ at the Ross Bandstand, the site of the first performances of the Tattoo, Brigadier David Allfrey said: 'Next year’s show has been in planning for some time. It is a tremendous achievement for the Tattoo to have developed and sustained a loyal and growing audience over 70 years. The show is remarkable in that it appeals to such a broad audience across the generations. I am very proud to have played a part in the story and thrilled to be leading it all in our grand anniversary year.

'Platinum is an amazing element.  It is valuable, durable and a catalyst in chemical "reactions" helping other ingredients to work well together. So too is the Tattoo!  I believe the Tattoo has made its mark not just here in Scotland but also on international stages. This coming year, we are taking stock of all that has been achieved over the years and looking forward to what lies ahead.'

Tickets for the ‘The Platinum Edition’ are available to purchase directly from the Tattoo’s official website at edintattoo.co.uk or by calling 0131 225 1188.

EXPLORE EDINBURGH WITH OUR 'OFF THE BEATEN TRACK' GUIDE - DOWNLOAD NOW