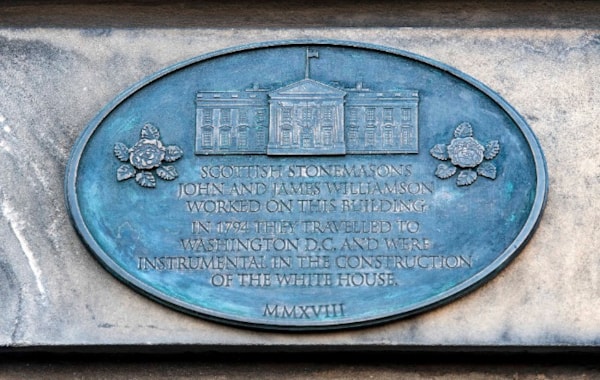 A group of Scots stonemasons who were instrumental in the construction of the White House in Washington have been honoured in their home city of Edinburgh.

A group of Scots stonemasons who were instrumental in the construction of the White House in Washington have been honoured in their home city of Edinburgh.

Alex Paterson, Chief Executive of Historic Environment Scotland (HES) was joined by Stewart McLaurin, President of The White House Historical Association to unveil the plaque at 66 Queen Street in Edinburgh. The building was one worked on by stonemasons John and James Williamson, before they travelled to Washington D.C. to commence work on the US Presidential residence.

The Williamson brothers were among a group of six members of Edinburgh Lodge number 8 who travelled to the USA in 1794, and whose skilled craftsmanship would make its mark on the White House. The stonemasons carried out elaborate carvings on the façade of the structure, including the iconic ‘Double Scottish Rose’ which features on many different parts of the building.

Recently Charles Jones, Technical Conservation Skills Programme Manager and time-served stonemason at HES, followed in the footsteps of the Williamson brothers when he was commissioned to carve a replica Double Scottish Rose by the White House Historical Association during a Symposium earlier this year. The replica is now on display in the White House Visitors Centre.

"At HES, as well as highlighting the historic importance of Scottish stonemasonry, we are committed to keeping traditional skills alive. We are helping to sustain stonemasonry and other traditional craft skills in a range of ways: from our training and apprenticeship programmes, including our partnership with Forth Valley College and our dedicated Conservation Centre in Elgin, to the research and cutting-edge technology at the Engine Shed, Scotland’s first building conservation centre.“

Stewart McLaurin, President of the White House Historical Association, said: “The stone masons of Scotland today are the legacy of great craftsmen from the 18th century who came to Washington and created the beautiful carvings that we still see on the White House.

"The Double Scottish Rose that we see on every pilaster is a Scots wink from those stonemasons and we were thrilled to have a reminder of that extraordinary stonemason talent."

The Scots who built the White House

The story of the stonemasons is explored in a new exhibition now on display at the Engine Shed in Stirling. The Scots Who Built the White House, housed at Scotland’s building conservation centre, examines the role played by these Scottish stonemasons in the construction of one of most iconic buildings in the world, and how their legacy survives in modern Scottish stonemasonry.

Exhibits on display include the 18th century masons mark book containing mason marks of both John and James Williamson, and the meeting minutes book where the trip was discussed, both on loan from Edinburgh Lodge 8. A replica of the Double Scottish Rose, carved by HES stonemasons, will also be on display.

The Scots Who Built the White House is now on display at the Engine Shed in Stirling until12 April 2019. Entry is free.