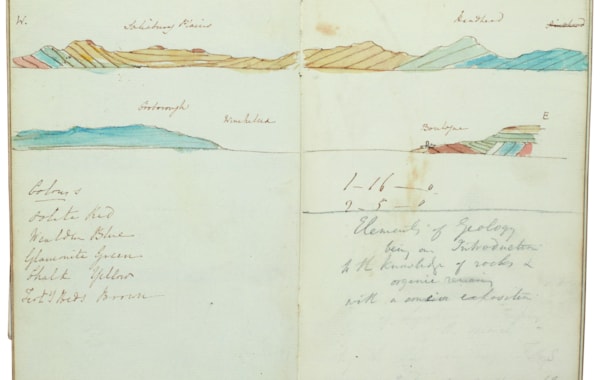 'Nationally significant' notebooks belonging to a scientist admired by Charles Darwin are to join the University of Edinburgh’s collections, following a successful campaign.

Close to £1 million has been raised to purchase a collection of writings by the Scottish geologist, Sir Charles Lyell.

Money donated by more than 1,000 supporters of the campaign, a grant from the National Heritage Memorial Fund (NHMF) and a contribution from the University has successfully secured the books. The works, previously held in private ownership, were subject to a government export bar, which prevents valuable artefacts from being lost to the UK.

Lyell, who died in 1875, aged 77, mentored Darwin after the latter returned from his five-year voyage on the Beagle in 1836. He influenced generations of scientists through his popular books and lectures and is credited with providing the framework that helped Darwin develop his evolutionary theories.

QUICK LINK: 5 Scots who stepped off the map into the unknown

Although written in the Victorian era, the works also shed light on current concerns, including climate change and threats to biodiversity.

They also explore the meanings of so-called ‘deep time’– the concept of geological time first described by the Scottish geologist James Hutton in the 18thcentury.

WHAT WILL HAPPEN NEXT?

The University is planning to make the collection of 294 notebooks available to the public for the first time through its exhibitions programme and digitisation.

Jeremy Upton, the University of Edinburgh Library and Collections Director, said: “The acquisition of Sir Charles Lyell’s notebooks is one of the most significant additions to our archive collection for many years and we are thrilled that they will be freely accessible to all.

“I would like to thank everyone involved in this campaign – especially those who made a donation, however large or small, to make this notable purchase possible.”