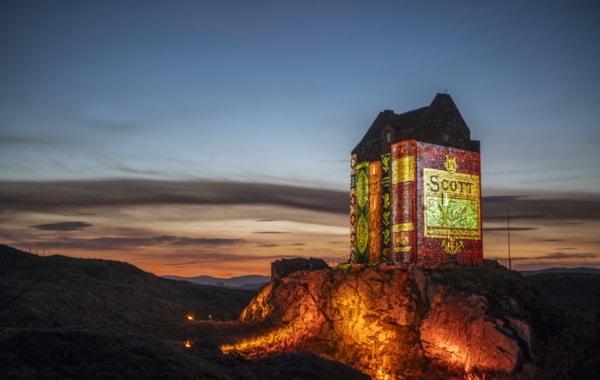 The night sky at Smailholm Tower, in the Scottish Borders, will be lit up on 20 March by the world premiere of a brand-new short film of the Young Scott, created by video artist, Andy McGregor.

An online broadcast of the event will introduce the Smailholm Tower light show to a worldwide audience from 6pm (GMT) on Saturday 20th March, to mark the launch of celebrations for the 250th anniversary of the birth of author, playwright and poet Sir Walter Scott.

Giles Ingram, Chief Executive of Abbotsford, Scott’s home near Melrose in the Scottish Borders, said: “Abbotsford is delighted to be leading a partnership of over 50 organisations who will be celebrating the 250th anniversary of Scott’s birth from now until August 2022. World Storytelling Day seemed the appropriate time to launch the celebrations, as Scott is renowned as one of the world’s greatest storytellers, and his global impact is reflected in the range and diversity of our partners.

“Smailholm Tower is next door to the farm where Scott lived as a boy, and his early experiences here continued to inspire him throughout his life. Scott’s life and death is written on the Borders landscape, so Smailholm’s intimate link with Scott gives it a particular potency and magic as we begin the celebrations of his 250th year.”

Viewers will be able to access the show by visiting the anniversary website, at 6pm on Saturday March 20th.

QUICK LINK: Lesmahagow - the village that changed the world