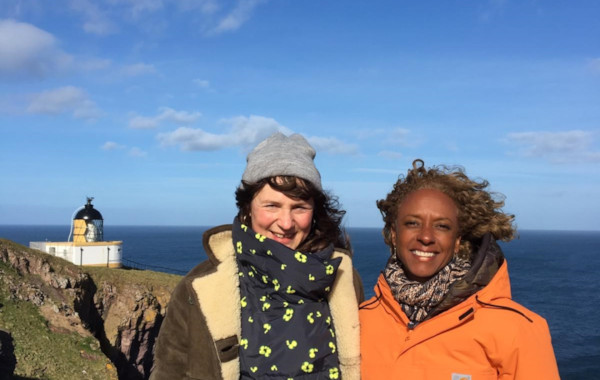 The first two episodes of the series, which begins on 25 March 2019, will be presented from the Berwickshire beauty spot that’s renowned for its dramatic geology and, during the summer, its soaring seabirds.

Interim Filming Manager for the National Trust for Scotland, Sarah Eccles (pictured here with Gillian Burke) said: “We were so pleased to welcome the Blue Planet UK team to St Abb’s Head, one of the beautiful places the Trust is proud to protect. It’s a privilege to be involved in such a prestigious production and one which does so much to raise awareness of the issues facing our marine environment, which our volunteers and staff are dealing with every day at places all over Scotland.”

St Abb’s Head is a year-round haven for birdwatchers, walkers and wildlife lovers. A veritable ‘seabird city’ in the summer months, the dramatic cliffs provide spectacular vantage points from which to watch thousands of nesting seabirds, including guillemots, kittiwakes and razorbills.