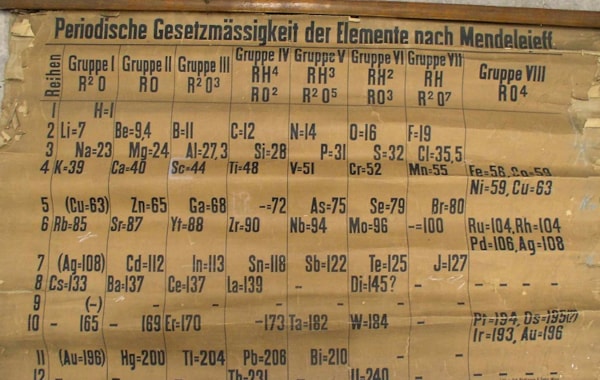 A periodic table chart discovered at the University of St Andrews is believed to be the oldest in the world, and the fragile document has now been repaired and restored.

A periodic table chart discovered at the University of St Andrews is believed to be the oldest in the world, and the fragile document has now been repaired and restored.

The chart of elements, which dates from 1885, was discovered in the University’s School of Chemistry in 2014 by Dr Alan Aitken during a clear out. Following months of clearing and sorting various materials in a storage area, a stash of rolled up teaching charts was discovered. Within the collection was a large, extremely fragile periodic table that flaked upon handling. Suggestions that the discovery may be the earliest surviving example of a classroom periodic table in the world meant the document required urgent attention to be authenticated, repaired and restored.

The table is annotated in German, and an inscription at the bottom left – ‘Verlag v. Lenoir & Forster, Wien’­ – identifies a scientific printer who operated in Vienna between 1875 and 1888. Another inscription – ‘Lith. von Ant. Hartinger & Sohn, Wien’ – identifies the chart’s lithographer, who died in 1890.

Working with the University’s Special Collections team, the University sought advice from a series of international experts. Following further investigations, no earlier lecture chart of the table appears to exist. Professor Eric Scerri, an expert on the history of the periodic table based at the University of California, Los Angeles, dated the table to between 1879 and 1886 based on the represented elements. For example, both gallium and scandium, discovered in 1875 and 1879 respectively, are present, while germanium, discovered in 1886, is not.

A researcher at the University, M Pilar Gil from Special Collections, found an entry in the financial transaction records in the St Andrews archives recording the purchase of an 1885 table by Thomas Purdie from the German catalogue of C Gerhardt (Bonn) for the sum of 3 Marks in October 1888. This was paid from the Class Account and included in the Chemistry Class Expenses for the session 1888-1889. This entry and evidence of purchase by mail order appears to define the provenance of the St Andrews periodic table.

Conservation of the document

In view of the table’s age and emerging uniqueness it was important for the teaching chart to be preserved for future generations. The paper support of the chart was fragile and brittle, its rolled format and heavy linen backing contributed to its poor mechanical condition. To make the chart safe for access and use it received a full conservation treatment. The University’s Special Collections was awarded a funding grant from the National Manuscripts Conservation Trust (NMCT) for the conservation of the chart in collaboration with private conservator Richard Hawkes (Artworks Conservation).

Treatment to the chart included: brushing to remove loose surface dirt and debris, separating the chart from its heavy linen backing, washing the chart in de-ionised water adjusted to a neutral pH with calcium hydroxide to remove the soluble discolouration and some of the acidity, a ‘de-acidification’ treatment by immersion in a bath of magnesium hydrogen carbonate to deposit an alkaline reserve in the paper, and finally repairing tears and losses using a Japanese kozo paper and wheat starch paste.

The funding also allowed production of a full-size facsimile which is now on display in the School of Chemistry. The original periodic table has been rehoused in conservation grade material and is stored in Special Collections’ climate-controlled stores in the University.

(text and image courtesy of the University of St Andrews)