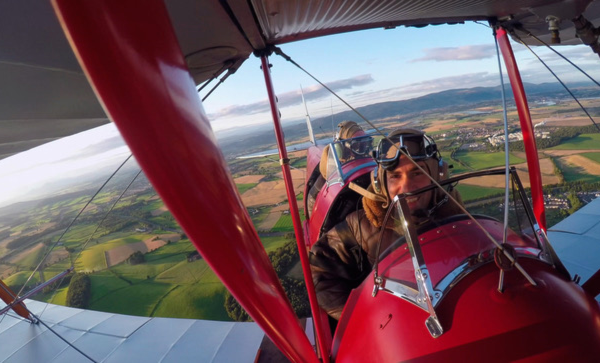 Jamie Crawford, presenter of Scotland from the Sky

The Archives and Records Association (UK & Ireland) and its ARA Scotland regional group have announced that Jamie Crawford, of BBC1's 'Scotland from the Sky', has agreed to be the ARA Scotland Explore Your Archive Ambassador for 2019-20.

The Archives and Records Association (UK & Ireland) and its ARA Scotland regional group have announced that Jamie Crawford, of BBC1's 'Scotland from the Sky', has agreed to be the ARA Scotland Explore Your Archive Ambassador for 2019-20.

Explore Your Archive is the annual campaign run by the ARA and a range of partners across the UK and Ireland to encourage members of the public to visit local, regional and national archives to explore the rich array of documentary heritage on their doorstep. The campaign is year-round and includes a launch week in the third week of November, when archives put on events, talks, exhibitions to showcase their holdings. The 2019/20 launch event is due to take place at New Register House in Edinburgh on 25 November 2019, with details due to follow in due course.

Karyn Williamson, chair of ARA Scotland, said: “We are delighted that Jamie has agreed to be the Scotland ambassador for the Explore Your Archive campaign for the coming year, not least because we celebrate in 2020 the 700th anniversary of the Declaration of Arbroath, one of Scotland’s most important archival treasures. We hope that Jamie’s involvement will encourage the public to explore the full range of local archival material at their disposal – documents that tell the social, political, economic history of the nation and the families and diverse communities within it.”

From Shetland to London and back...

In addition to his television and broadcast work, James Crawford is an award-winning writer and publisher, born in Shetland in 1978. He studied History and Philosophy of Law at the University of Edinburgh, winning the Lord President Cooper Memorial Prize. He went on to complete a masters in journalism and was a radio broadcast journalist before moving to London to work as a literary agent.

For the past eleven years he has been the Publisher at Historic Environment Scotland, winning the runner-up award for Publisher of the Year at the 2018 Saltire Awards and making the shortlist for Best Academic Publisher at the 2019 British Book Awards.

In 2016, James was elected as chair of the board of Publishing Scotland, the network body for the publishing industry in Scotland. He lives in Edinburgh.