Are your childhood books under threat? 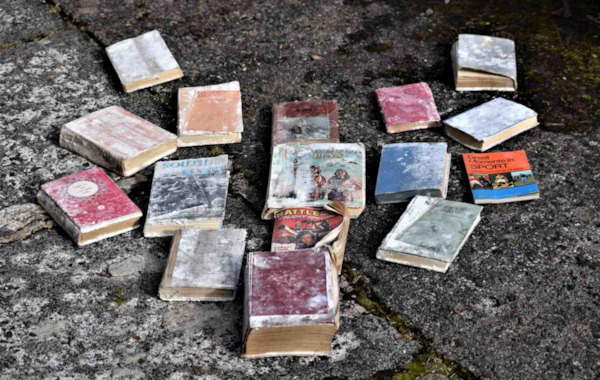 Are your childhood books under threat?

William Clark takes a nostalgic trip into his book-loving childhood - with a warning that some of your old favourites might not make it through to the next generation.

Are your childhood books under threat? Images

William Clark takes a nostalgic trip into his book-loving childhood - with a warning that some of your old favourites might not make it through to the next generation.

What a shock. While rummaging in the attic, the unholy sight of books I had loved from boyhood appeared – disintegrating under a frosting of powdery mildew. Yipes! What evil genie had cast dark spells amongst the memorabilia of a lad's finest hours?

Books had provided an escape oasis in a boyhood spent in the long, winter nights and rainy days of 1950s west coast Scotland. Together, we hunted for the source of the Nile with Livingstone, relived the glory days of the British Empire, fought alongside Nelson at Trafalgar, defeated King Edward at Bannockburn and conquered the skies with W E Johns' Biggles. Heroic journeys fearlessly undertaken.

My introduction to reading began in a remote Forestry Commission village without electricity. There, I discovered that a mother's stories read by candlelight created a wonderful atmosphere. The Beano, Topper and other comics of DC Thomson were a further step. A fuller fare of gems like Enid Blyton's Famous Five, Richmal Crompton's Just William and Anna Sewell's Black Beauty followed. With growing reading competence, the sky was the limit. 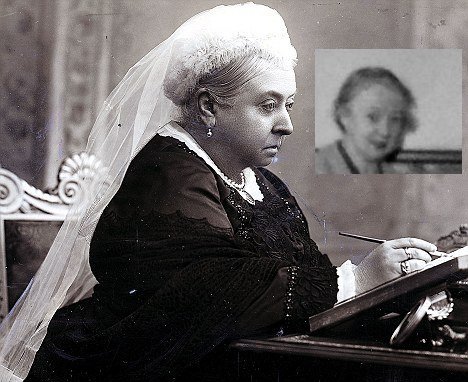 Our small, rural school was the domain of a spinster teacher (shown inset on the left) who had lost her sweetheart in World War I – an age when love was forever. Miss Lily Rose Anderson was born while Queen Victoria reigned over an empire on which the sun never set. This dedicated teacher looked rather like her monarch, with fading, fair hair in a perpetual bun. She ruled over seven classes in one room, which gave plenty of time for reading.

The school had a small bookcase of books provided by the Council library service, renewed every quarter. I would read every one. Against the wall, stood an old, larger bookcase glass-fronted and locked. It bore the legend 'presented by J & P Coates'.

This piece of Victorian solidity had been donated around 1900 by the famous cotton-thread makers. In my day, no one read the ageing books with their small type, dark covers and lack of colour pictures. I persuaded Miss to allow me access and discovered the books of previous generations: the Waverley Novels and poems of Sir Walter Scott, Kidnapped by RL Stevenson and Richard Henry Dana's Two Years Before the Mast. With eyes aglow, this short-trousered boy escaped through the double glass-fronted doors into a swirling world of past glory and adventure.

Recently, I was intrigued to discover that J & P Coates had amalgamated with the Clark Empire. The Clark family also used their large fortune to contribute to the education of the Scottish people. In 1873, William Clark built a Sunday school for the Oakshaw Free Church. I humbly doff my cap to the philanthropists who used their good fortune to enlighten my youth. I would like to think I was related to my generous namesake.

Years of magic and wonder

My exploration of the power and pleasure of words began by candlelight, but now I surf the web with access to the world's knowledge. I can type using my voice and Google Docs. Can the kids of today ever fully appreciate the magic and wonder of their era, as they lack the contrasting experiences? Will they ever love books in the way their grandparents did in childhood? They are so spoiled for choice. But the story is the thing no matter the medium; the great ones will linger long. Perhaps they will reread them while sitting on the moon!

Moon dust might be a problem of the future, but discovering that my book cache had been attacked by mildew was heart-breaking. But what to do about it? Some were so badly deteriorated that binning was the only solution. A hasty search of the internet produced many recommendations. One popular approach is to kill the spores by putting the affected books in a bag in the freezer overnight before careful cleaning.

I gently placed the books in a box. Excess inhalation of spores is not good for your health – a mask is recommend. On a sunny day, I spread them out on a concrete surface to dry. The vacuum cleaner removed most of the dust; a fine brush much of the remainder.

The enemy in the attic is damp, still, air creating ideal conditions for the spores to multiply and drift. An air-tight container or polythene bag will protect books when there is no space in a suitable bookcase. If you can, see that your loft space is ventilated and heated. Consider using a dehumidifier.

I managed to save a good few of my treasured books, and who knows but that I might get round to re-reading them someday. At least, they now stand a chance of becoming someone's valued heirlooms.

William Clark is the author of Scottish Sphinx. He was educated at Oban High School where he was a classmate of James Hunter the well-known historian. William would lend him his science notebook to catch up and fears it might have caused this notable student to abandon science and take to history. :-).