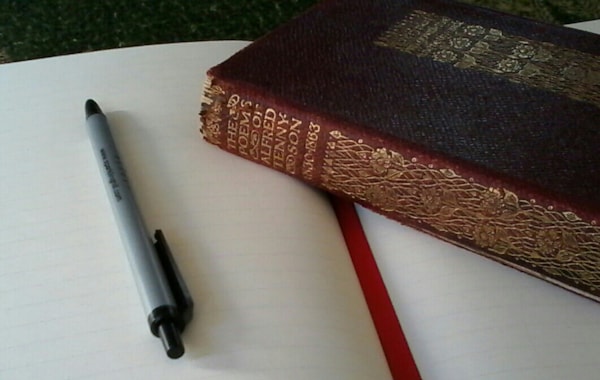 S.B. Julian remembers a book passed down the family from her grandmother.

S.B. Julian remembers a book passed down the family from her grandmother.

In 1906 when my Scottish grandmother was a ten-year-old student at Kirkcaldy High School near Edinburgh, she won a book prize which was eventually passed down to me. It was a copy of The Poems of Alfred Tennyson, one of those Everyman editions with gold lettering on a maroon cover, which Grandmother won for achievement in English Literature.

She died when I was in my teens but I remember her well. She was dignified and self-effacing, quiet in a crowd, but the ten-year-old English-Lit star kept a life-long allegiance to proper spelling, and when a word was mis-spelled she became suddenly assertive. As a Canadian kindergarten child learning to write I once mixed up “their” and “there”, and the difference was treated with a seriousness which only the product of Scottish schools could muster. Hard work was rewarded in that system – with books. Laziness was sinful in Grandmother's family, and not bothering to learn to spell your own language was lazy. This I interpret as a Scottish affinity for honesty and exactitude, part of the “identity” which my grandparents, and I, inherited from our ancestors.

My grandparents would never have been political about it though; “identity politics” would have been a mystery to them. Do we even now agree on what it means? Grammatically speaking (speaking that is as a Scottish dominie would), “identity” comes from the Latin “idem”: “same”. As for politics, the common root words of politics, policy and polite are “polis” (city) and “polites” (citizen in Greek), which are also related to “polish” -- that which has been smoothed over and refined.

Now that we’ve got Gaelic grammatical exactitude out of the way, what then is identity politics? Historian Francis Fukuyama defines it as the politics of resentment: members of a group demanding dignity which they feel other groups are denying them. Where identity used to be derived from one’s achievements, class and income, it now derives from others’ attitudes toward one. If others don’t let you tell your story it means your race, ethnicity, gender or other identifiers have been insulted. This thinking, says Fukuyama, stems from the 20th century self-esteem movement. It seems to have morphed from self- to group-esteem, and here in Canada identitarians seem to have replaced minoritarians, who had replaced communitarians … It’s hard to keep up.

To my grandparents these labels would have been unintelligible, and “self-esteem” a puzzler, though clearly implying self-indulgence. Education at Kirkcaldy High was not about indulging the self but improving it. You didn’t go to school to stay the same, loyal to a tribe or ethnicity, you went to be changed -- by knowledge. The goal was to become cultured, refined, courteous, polished -- rather like Alfred Tennyson whose poetry, a flower of the Enlightenment-Romanticist ethos, was given to my grandmother as a prize. Later, here in Canada, the prize came down to me.

Life in a new land

It wasn’t only a book that came down of course but the culture it represents. My grandmother grew up, married a machinist who had survived the First World War (not unscathed), and emigrated to Canada to join the long line of Scots who largely made Canada what it is. The thrifty, hardworking, bluntly honest, well-educated Scot is everywhere in Canadian history: building railways, founding universities, publishing newspapers, running the Hudson’s Bay Company and the government. They turned the “land of lake and wood” (to borrow the English immigrant-author Susanna Moodie’s phrase) into the land of Parliament and trial by jury. Ironically, these are the very achievements that some now criticize as colonialist.

Most Scots-Canadians that I know find this cultural reversal amusing, having a dour and skeptical sense of humour to match their typically straight spines and closed mouths – closed when it comes to pointless argument. Why argue with feelings? Some are proud of their Scottish blood, yet it’s not blood but canny self-reliance which is the important inheritance.

Our first Prime Minister, John A. Macdonald, had that self-reliance. Hailing from Glasgow he began not as some sort of entitled mandarin but as a working-class boy who left school at fourteen and later apprenticed at a law office. Once qualified he excelled, entered politics and applied the stringent yet polite values which define the word “politic”. By including aboriginal people in Canada’s national project of education (in residential boarding schools) he thought he was doing them a favour. (Indeed, what would people be saying today had they been left out?) Did he want to change them? Yes: in his tradition education is supposed to change people, and lead them to higher levels of achievement. (Look what it did for him.)

Education certainly never prevented my grandmother from having her own identity. Political she was not but polite -- sister-word of “politics” -- she was. Her “tribe” had never heard of political correctness, but they were skilled at polite correctness whether applied to manners, civic duty or spelling. Another word stemming from “polis” is police, which prompts a question: who are the thought-police policing the Resentment Wars to which Fukuyama refers? Instead of keeping the straight spine of the stern Scot of caricature, thought-police bend over backwards to appease those considered marginalized. One of my grandmother’s expressions when confronted by difficult people was that they “had to be handled with kid gloves”. There was disapproval in the phrase, but also acknowledgement of someone's – or some group's – need for emotional reassurance.

Dignity comes not from how others behave toward you, but from how you behave. Says who? My grandmother -- not in so many words but in her lifestyle. Today she lies in a grave in her adopted country which is the native land of her children and great-grandchildren (“native” meaning the land where we were born). In the grave she lies even more unobtrusively than in life – obviously -- but I've no doubt her spine is still absolutely straight.

(Bio note: S.B. Julian (Sandra) writes plays, fiction and nonfiction in B.C., Canada. Information on her latest book, Women Who Made the World, (history), and other works can be found here.