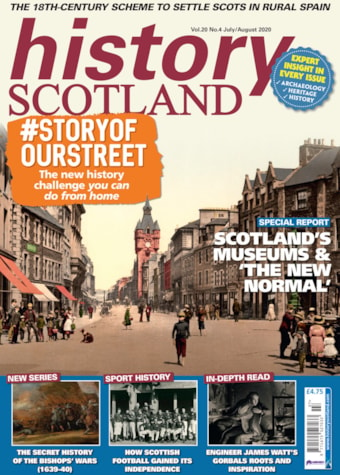 The NEW history challenge you can do from home, a special report on Scotland's museums and the new 'normal', the secret history of the bishops' wars and how Scottish football gained independence

July/August History Scotland brings you the latest news and opinion from around Scotland, with in-depth research you can’t read anywhere else.

Highlights of this issue include:

Who makes the rules? How Scottish football secured its independence

We explore the early history of both the Scottish Football Association and the Scottish Rugby Union, exploring how these organisations helped ensure a distinctive Scottish experience of the country's two most popular ball-games

The secret history of the Bishops' Wars

Beginning a new, two-part series, we reconstruct the background to the Bishops' Wars (1639-40), a relatively minor conflict that would nonetheless play a crucial role in initiating the British Civil Wars of 1640s and 1650s

The Campones letter: a scheme to settle Scots in Spain, 1783

In 1783, a community of Scots in the north-east hatched a seemingly bizarre plan to settle a Scottish community in Spain. We investigate what was going on.

Plus: archaeology project to explore the stories of a forgotten Highland township, the unique architecture of Well Court in Edinburgh’s Dean Village, and how the heritage industry is responding to the coronavirus challenges.