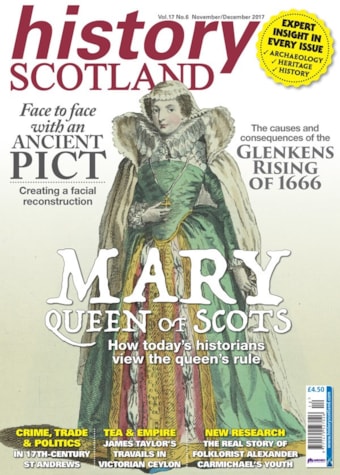 Mary Queen of Scots- how today's historians view the queen's rule, face to face with an ancient Pict, plus Glenkens rising of 1666

In the November/December issue of History Scotland we present the latest research from experts in the fields of Scottish history, heritage and archaeology.

· Exploring the childhood and youth of folklorist Alexander Carmichael, as we examine his original notebooks to untangle the myths he wove about his early life

· The ‘dread and horror’ of the Glenkens Rising of 1666, when a Borders community shattered by the burden of quartering government soldiers took matters into its own hands, with far-reaching consequences

· To mark the 150th anniversary of the Ceylon tea empire, we tell the story of James Taylor, the son of a wheelwright who became known as the ‘father of Ceylon tea’

Don't yet subscribe? Why not join today for as little as £3.50 an issue and get a FREE 'Who Built Scotland' book