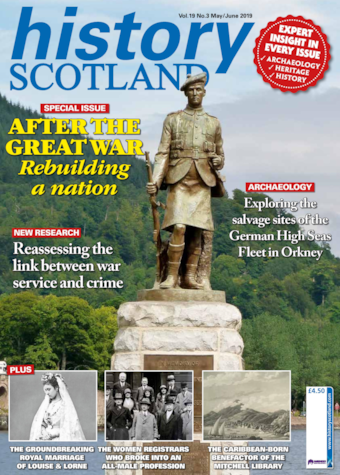 Special issue on rebuilding a nation after the Great War, we explore the sites of the German High Seas, plus links between war service and crime

Inside the May/June issue of History Scotland:

After the Great War: Rebuilding a nation

- Life in Scotland between the two World Wars
- Special report on an underwater archaeology project studying the remains of the scuttled ships of the German High Seas Fleet
- Remembering their sacrifice: How a nation honoured its war dead
- Crime amongst war veterans in the post-war years

We also have news, features and opinion covering centuries of history and archaeology, including the women registrars who broke into an all-male profession, literature in the interwar period and a new study of Princess Louise, duchess of Argyll (1848-1939) and her connections with Scotland.