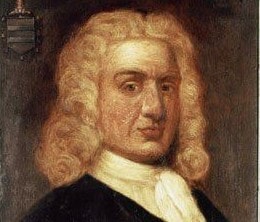 Scottish pirate William Kidd was executed on 23 May 1701 in London.

Dundee-born Kidd was originally commissioned by the English government to attack pirates in the Indian Ocean, however none of the men who had engaged him in this work spoke up for him at his trial.

He appeared before the High Court of Admirality in London on charges of piracy and murder and was hanged (on the second attempt, after the first rope broke) at Execution Dock in Wapping.

Captain Kidd's name became famous because of the legends which grew up around treasure which he had supposedly hidden before he was captured by the authorities. These tales inspired a number of novels, including Robert Louis Stevenson's Treasure Island.

QUICK LINK: The murder of Captain Glas: the original inspiration for Treasure Island?

Subscribe to History Scotland magazine today and receive your first 2 issues for just £2! Enjoy Scottish history at home and have your magazine delivered straight to your door while saving money. Click here to claim this offer