There are seven cities in Scotland, all quite small by British standards and even smaller on a global scale. The smallest of them is Stirling but it used to be the capital and it is one of the most important places in Scottish history.

A new book about Stirling Digging into Stirling’s Past: Uncovering the Secrets of Scotland’s Smallest City explores this history.

The reason for this significance is an accident of geography, The Forth Valley is low lying and for much of prehistory boggy and hard to cross.

The shortest point across it was at Stirling which also coincided with the upper tidal limit of The Forth and in a warm summer (typically one day in June!) at low tide it is possible to cross the Forth dry shod or most of it given that Robert Louis Stevenson’s granddad blew up some of it to help navigation. Stirling sits at this pinch point and for the last 2,000 years if you wanted to invade Scotland or to resist it you did it here.

A witness to history

It has witnessed Celts, Romans, Britons, Picts, Scots, Angles, Vikings, Edward I, Edward II, Edward III, William Wallace, Robert the Bruce, Cromwell, Bonnie Prince Charlie, Cumberland and played a decisive role in D-Day. For millennia everyone and everything came through Stirling and it took the construction of the Forth Rail Bridge, then the largest bridge in the world, to finally bypass us!

Here are my top five places you must visit when you come to Stirling and I’ve assumed you will want to see Stirling Castle, the National Wallace Monument, the Battle of Bannockburn Centre and the Smith Museum & Art Gallery.

Stirling’s main cemetery is nestled between the medieval Kirk of the Holy Rude and Stirling Castle and is so picturesque that Wordsworth  said of it We know of no sweeter cemetery in all of our wanderings than that of Stirling. 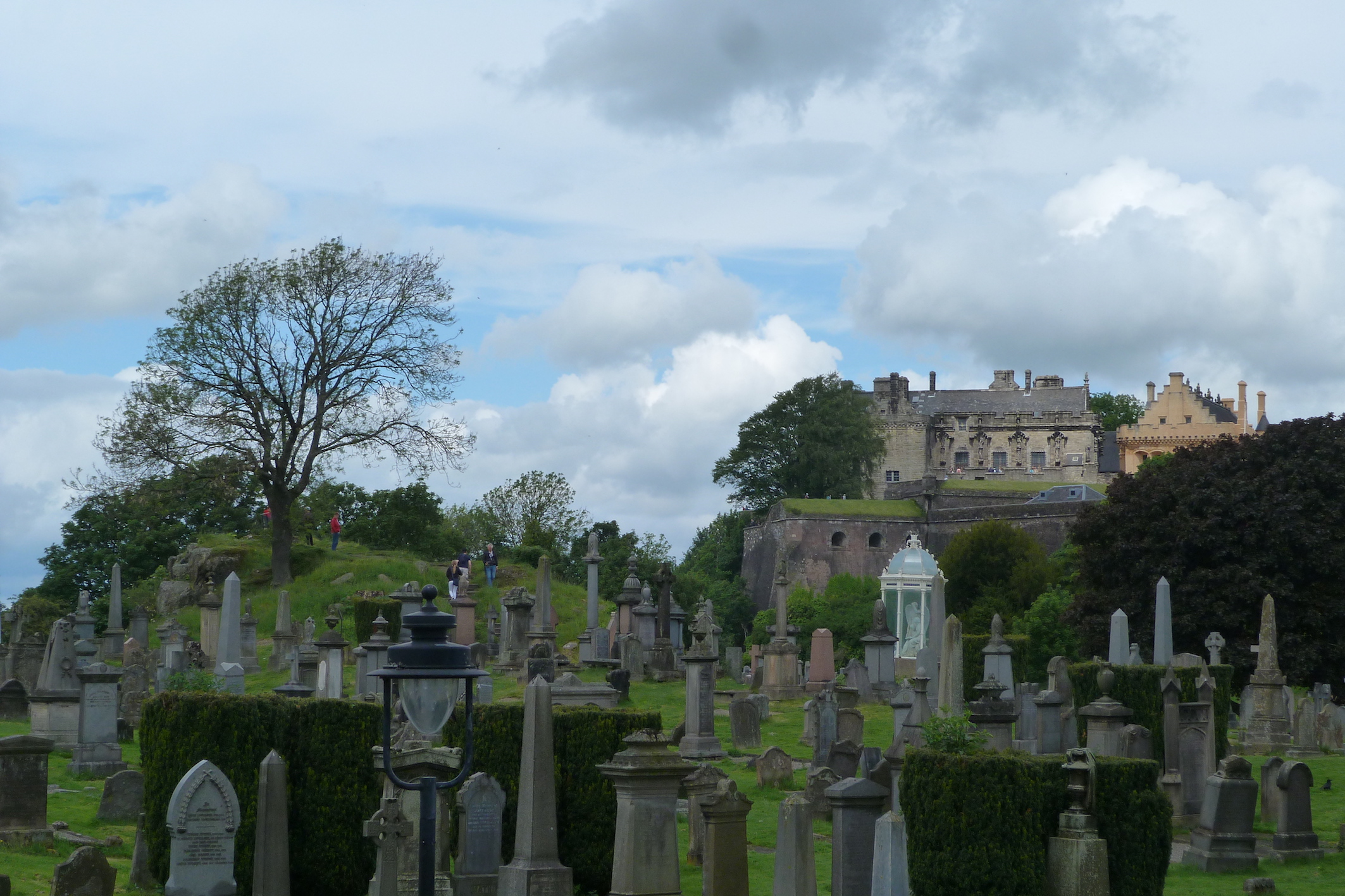 The site has been used for witch burnings and one of Scotland’s first firework displays, celebrating the baptism of the future James VI, it is probably where Edward I launched his infamous War Wolf at the castle in the siege of 1304 and where Bonnie Prince Charlie attempted the last ever siege in 1746.

The oldest gravestone in the cemetery dates to the 16th century and the most recent is the body of a 700-year-old Dominican friar. It features one of the world’s first female archaeologists, Christian Maclagan and a memorial to James Young Moyes who was an engineer on the Titanic and who went down with the ship, manning his post at the last to ensure that lights stayed on. There are graves that were robbed in the 19th century at the demand of medical students, a stone damaged by Cromwell’s siege of 1651, green men, an ouroboros or two and a Gaelic bone-setter.

Mote Hill, just north of the castle, is a tiny wee knoll on the most northerly tip of the Gowan Hill and features two cannons and the medieval beheading stone. It may the most accessible vitrified hillfort in the world as its only five minutes along a tarmac path. 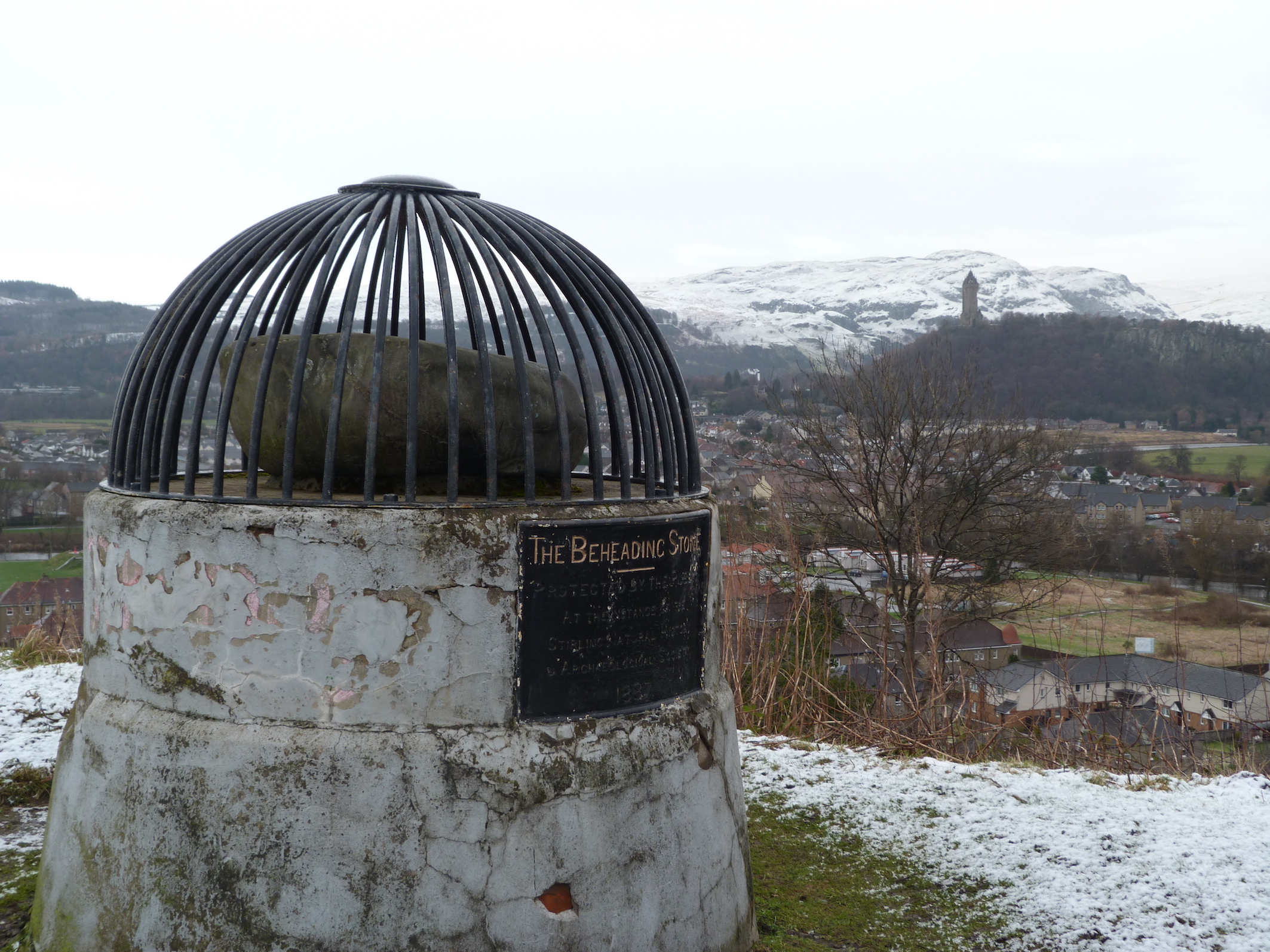 As you all know vitrified is the process by which a timber laced fort is heated to temperature in excess of 1,000 degrees centigrade, so hot in fact that the water content of the stones erupts and red hot steam and the rocks begin to melt and fuse. This took a sustained effort over a number of days, the billow of smoke would be visible for miles and the golden red glow from the fire would’ve been visible for miles.

At this scale it has to be deliberate an awesome statement of regime change. This one was destroyed in the late 1st or early second centuries AD and may in fact have been destroyed by the Roman army when Stirling was part of the Empire.

Torwood or the Tappoch is the biggest and best preserved broch around Stirling (although it’s just in Falkirk…shh don’t tell anyone!). There is a signposted walk to the site, which is built within an older hillfort. It has the area’s oldest staircase and the clear remains of a stone ledge that supported an upper floor. The Roman road runs to the side…turn left for Rome! 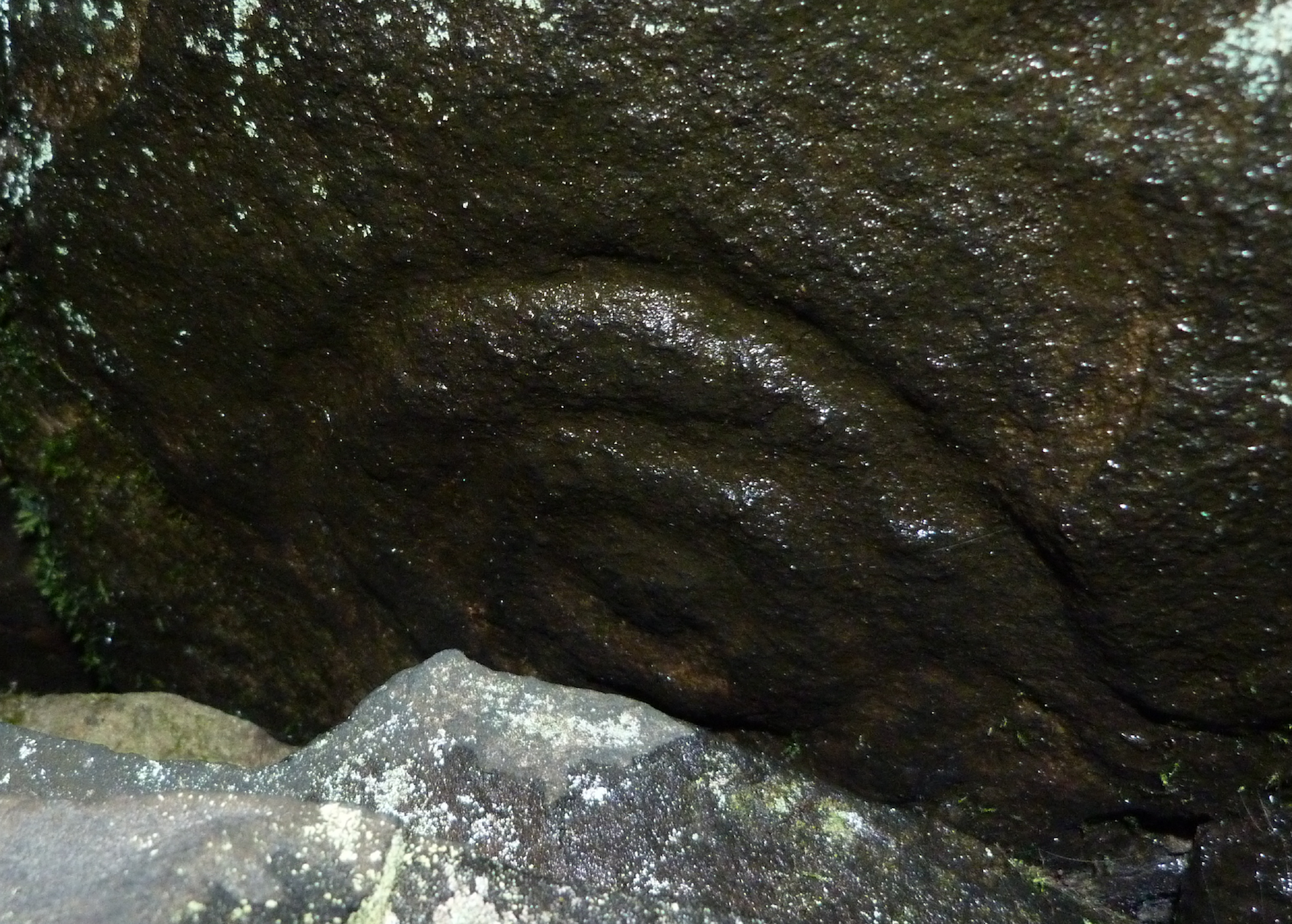 The staircase is to your left. Now as you walk up the stairs you will have passed what may be an Iron Age shrine. Turn around, squat down and look for the reused face-down cup-marked stone, use your hands to feel for it if you can’t squat. The broch is 2,000 years old and the reused stone may be 4,000 years old.

Now, there is a lot of evidence for Scottish Iron Age ritual taking place in dark, cramped conditions, with the sensory deprivation creating an almost hallucinogenic effect. The staircase where you find the hidden cup-marking is the darkest and smallest space in the broch. I imagine that we are looking at a secret, to be revealed to members of the community as they come of age, something that would bind the generations together – and if you find it, perhaps in some way, you too are connected with them...

There are two Royal Parks in Stirling. The Old Park is the oldest and best preserved in Scotland the New Park which was established in the 13th century played a key role in the battle of Bannockburn. 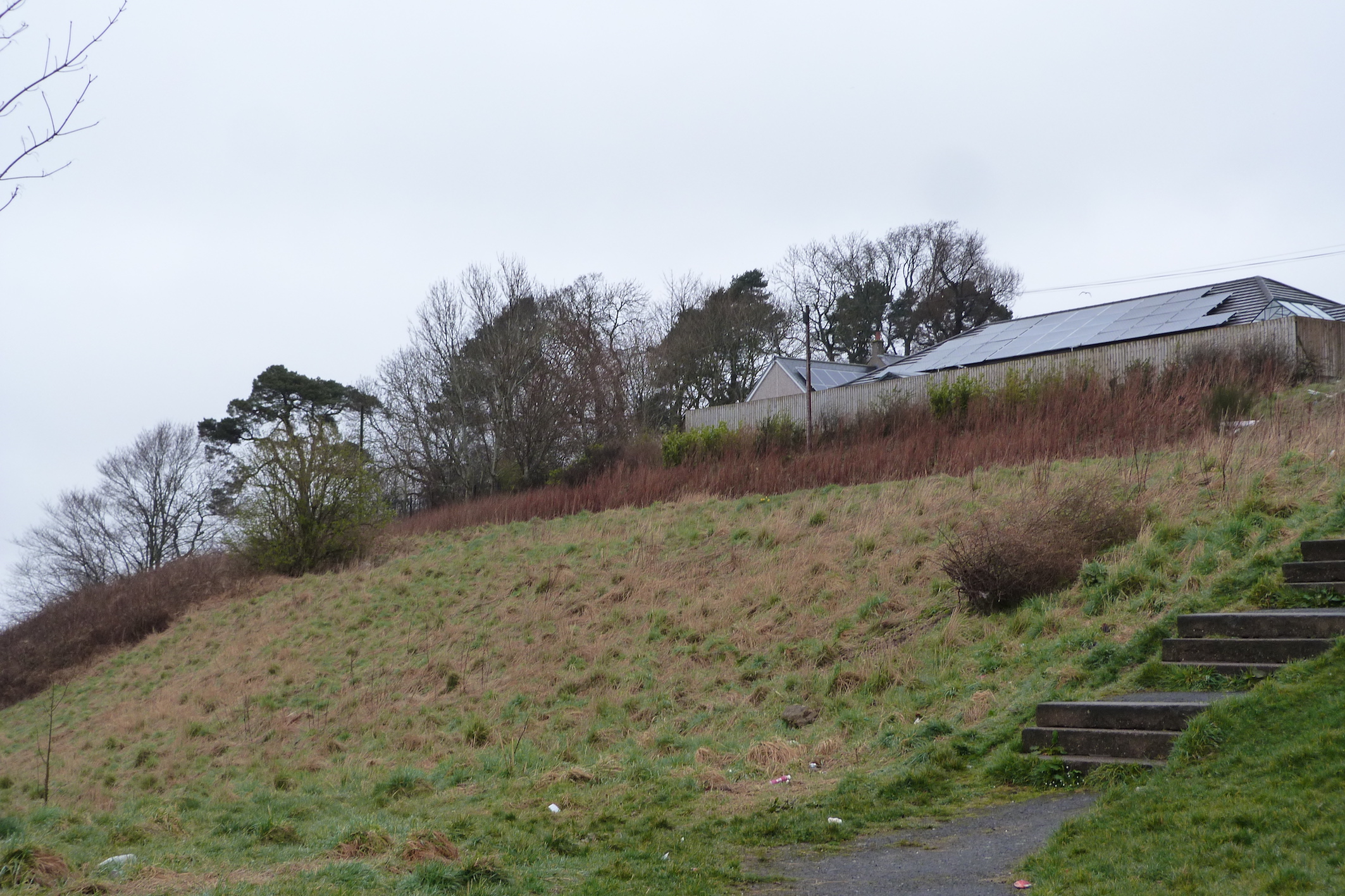 The only surviving element of the New Park is Coxet Hill, or rather Kokishote, which is mentioned in a charter of Robert the Bruce from AD 1307. The hill has a few remnants of what was a cruciform wood (the best preserved bit is at the north-west end) and was a cockshoot.

Netting was placed against the woods and beaters scare birds to the nets where they were caught. We know that the New Park was held by private owners through the 14th and 15th centuries. We don’t really know who hunted here, but it seems likely that Robert The Bruce did and equally possible that Mary Queen of Scots may have. This may be the best preserved cockshoot wood in Britain.

But its real claim to fame is that it’s the likely spot for the Scottish camp during the battle of Bannockburn.

The most obvious symbol of Scotland, known across the world, is tartan. But did you know its modern origins lie in Stirling? After the last Jacobite Rising by Bonnie Prince Charlie in 1745, the 1746 Dress Act banned the wearing of tartan north of the Highland Line and you could be fined or sent to jail for wearing it. 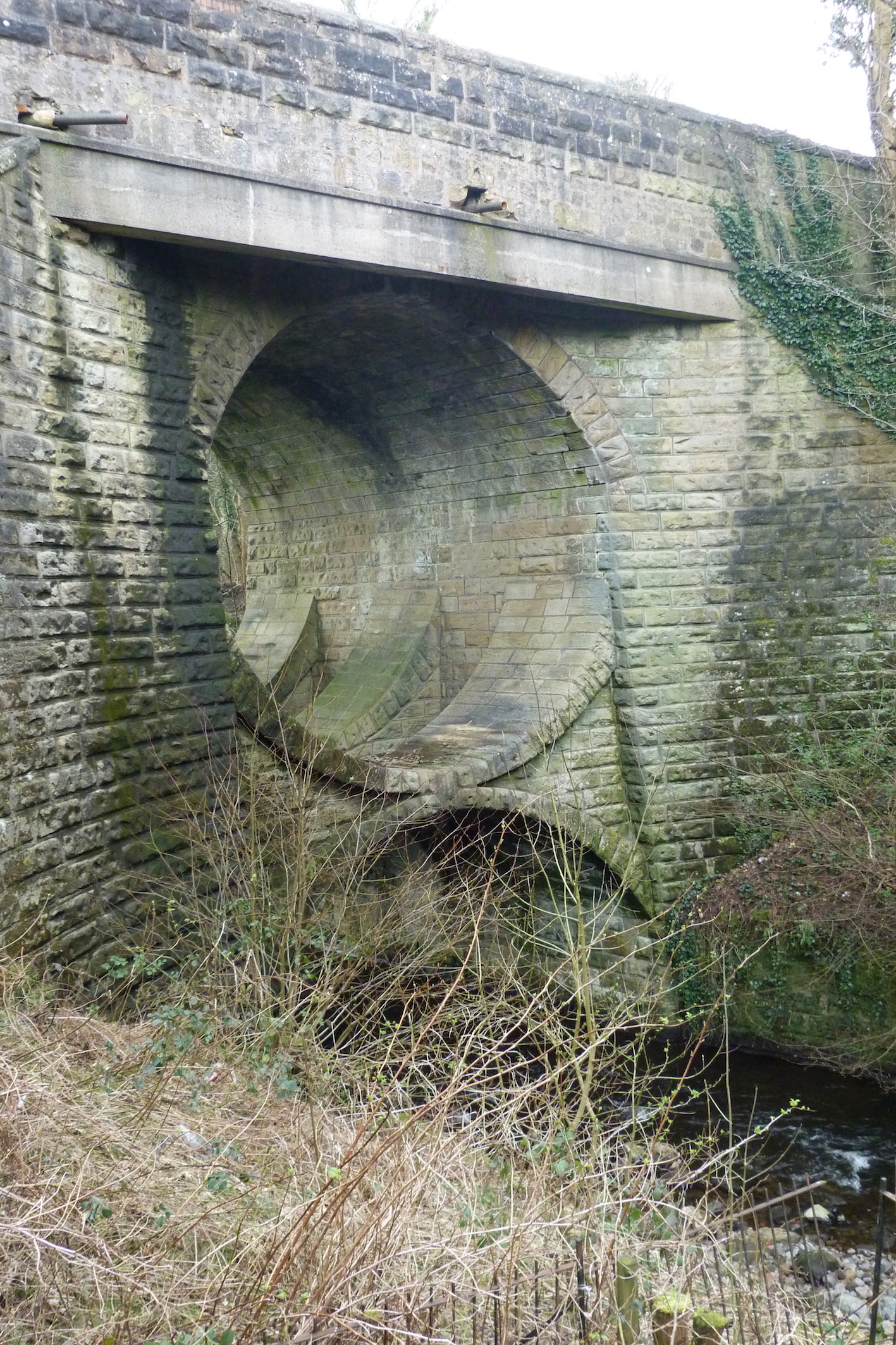 Now of course, Stirling has always been south of the Highlands so tartan could be made legally here and one William Wilson of Bannockburn was able to make and sell tartan to Scotland south and east of the Highland Line and to the nascent colonies of the British Empire.

It was William and family that first started to coordinate tartans and commercially produce them. The last standing mill in Bannockburn is the George IV mill right next to a Bridge built by Telford…. although this one was a carpet mill!

The author, Dr Murray Cook, is Stirling Council’s Archaeologist. He lives in the city with a long-suffering wife, three teenage girls and two pesky but loveable cats. He has undertaken numerous excavations across the region and published over 40 books and articles. He won a Stirling’s Provost Award in 2018 for his work for the Council, where he has helped raise over £300,000 to be spent on community archaeology and research and has even got invited to see the Queen at Holyrood Palace, along with a few hundred others! He has appeared on several TV programmes, and has sometime even been paid! He writes a regular column in the Stirling Observer upon which this this book is based, is an Honorary Research Fellow at Stirling University, a Fellow of the Society of Antiquaries of Scotland, runs an occasional course at Forth Valley College on Stirling and likes to do it in ditches (archaeology that is!). He also co-runs regular training digs open to all under the name Rampart Scotland. If, after this book, his career is still in ruins he will be very happy!