Stuart Fisher takes us on a tour of two Scottish locations, exploring their historic links to the country's coastline.

Scotland is famed for some of the finest coastal scenery in Europe. Indeed, VisitScotland's 2020 campaign is Coasts & Waters. The fact that the coast is mostly varied, wild and rugged is a major part of its attraction.

Scotland's towns and cities are mostly inland rather than facing open sea, more sheltered from the weather and the Vikings. Even Edinburgh's centre of activity is well back from the Firth of Forth. Yet the coastal conurbations and industry are rare enough to give contrast to the wild coast.

Aberdeen is Scotland’s third largest city and the only one on the open coast. The Granite City takes its nickname from the bylaw which has required all buildings to have granite fronts, supporting local quarrying interests. Most buildings are built completely of grey granite with mica flecks.

These include Marischal College (pictured below), the world’s second largest granite building, formerly part of Aberdeen University but now the city’s council headquarters after the university’s exodus to the Old Aberdeen King’s campus. 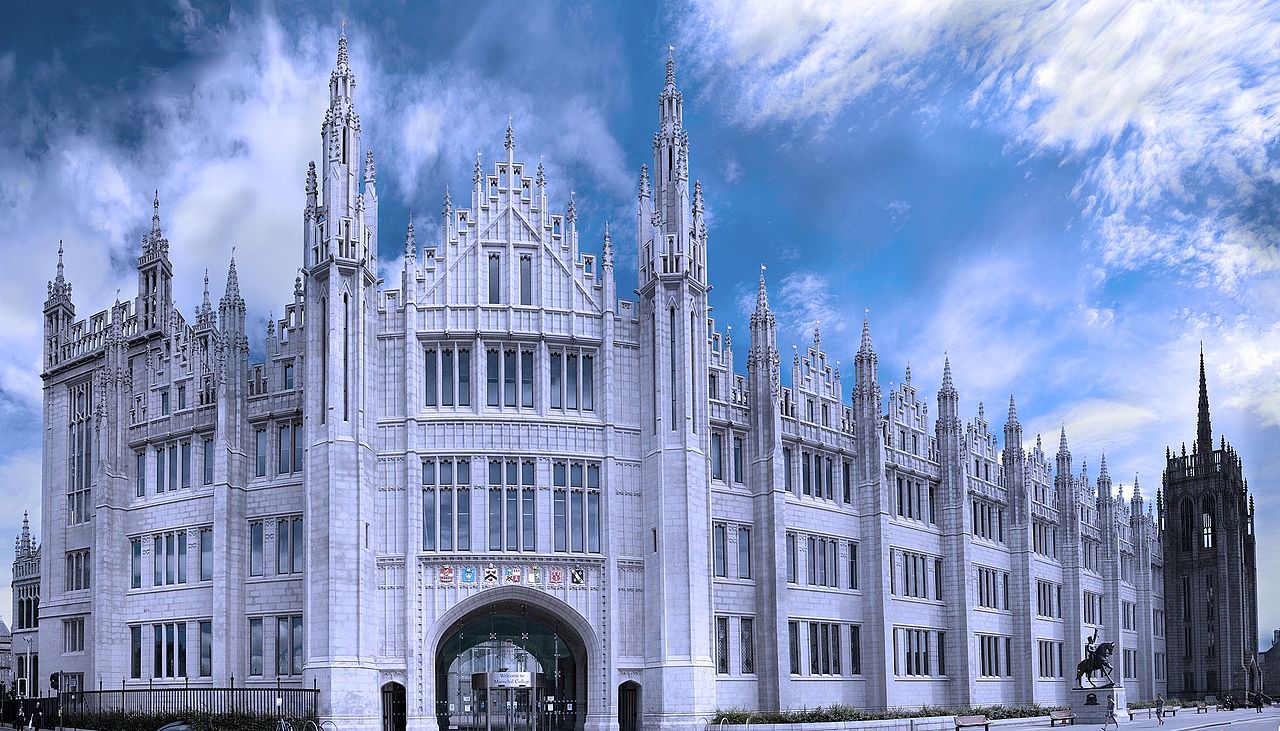 Aberdeen was able to boast two universities at a time when England had two. These were later merged. In 1717 Colin Maclaurin was elected professor of mathematics at the age of 19. In addition, to the 525-year-old university has been added Robert Gordon University with particular interests offshore. Co-operation is such that as a student I had lectures at all three campuses.

Dugald Dalgetty of Drumthwacket in Scott's A Legend of Montrose quoted more than anybody from his student days at Marischal. The quadrangle of later 1836–44 buildings includes the Mitchell Tower. Despite the size of the building and its 1km distance from the sea, its tower has been measured to rise and fall 20mm with the tide.

Times have changed since Lord Byron was resident as a youth. Despite a reputation for meanness, Aberdonians have often been the most generous supporters in Britain of student charity activities. A 1994 party to celebrate Union Street’s bicentenary attracted 100,000 people.

Aberdeen harbour, off the estuary of the Dee, is one of the leading fishing ports in Britain with a large fishmarket and is the main base for the North Sea oil industry. A modern marine operations centre overlooks the harbour, which was exporting fish, hides and wood to England and Europe in the 13th century. There is vehicle ferry traffic to Lerwick, Stromness, the Faeroes and Bergen. 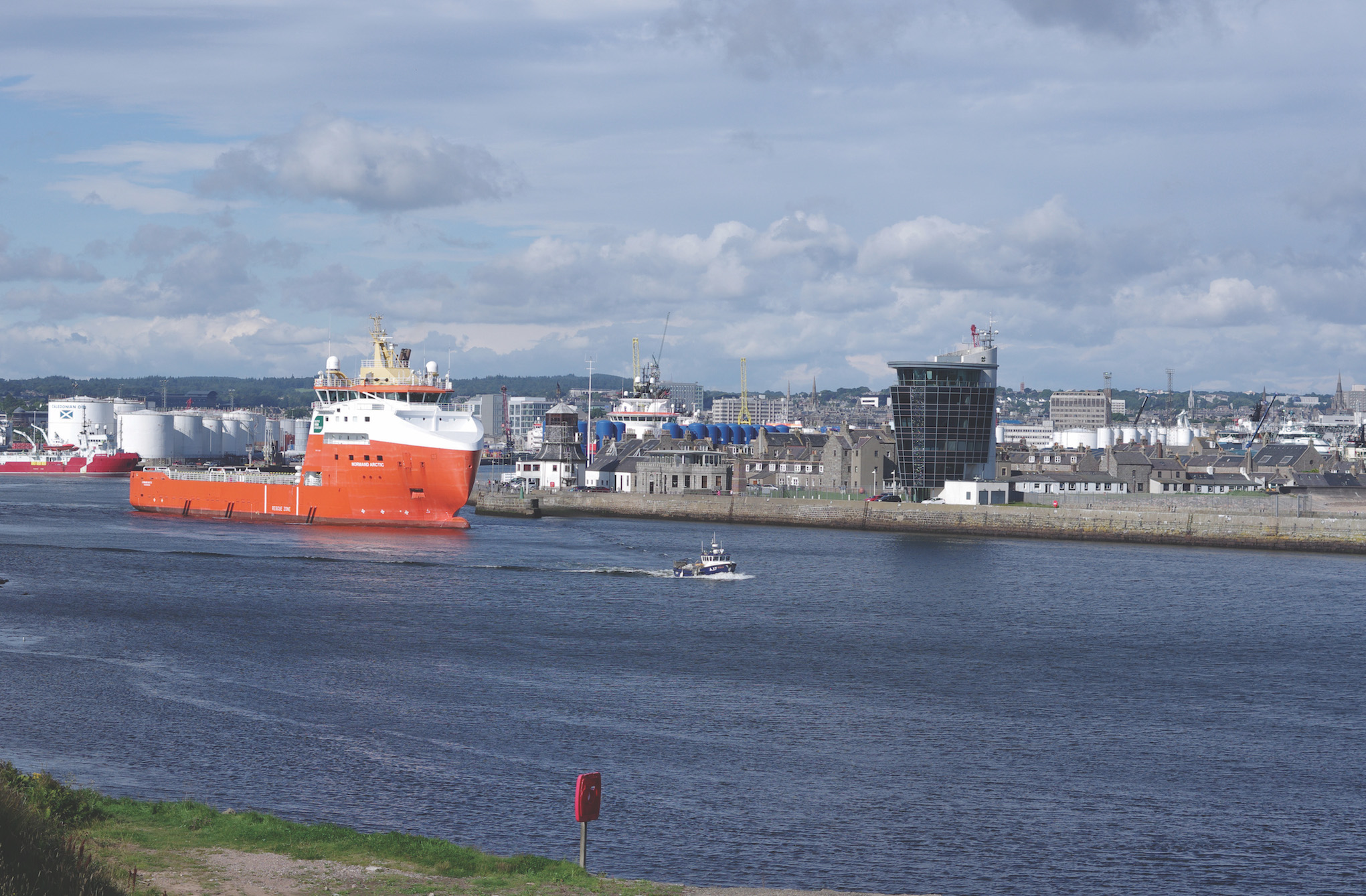 Fortunately, the city seems to have lost much of its 1970s oil town Americanism and the industry's expertise is largely home grown. It has also lost the mermaids who were heard singing hymns around the estuary several times in 1688. Perhaps these were seals.

The lighthouse on Girdle Ness was built in 1832 by Robert Stevenson as a round tower 40m high that is now visible for 36km. It was the only one in Scotland to have been fitted with two fixed lights, the lower 21m below the upper one. The minaret shape includes cast iron work with birds and animals.

Nigg Bay is the possible former mouth of the River Dee and is being developed as Aberdeen South Harbour. The bay was used for saltmaking and lay below the gaze of the Torry Battery. Oil rigs have been anchored in the bay.

Ayr, a royal burgh since 1205, is the major resort on Glasgow’s seaside coast. Formerly the chief port of western Scotland, it was developed on fish, wool and linen. The biggest conurbation facing open sea on the west coast, it runs from the River Doon to the River Ayr and beyond. 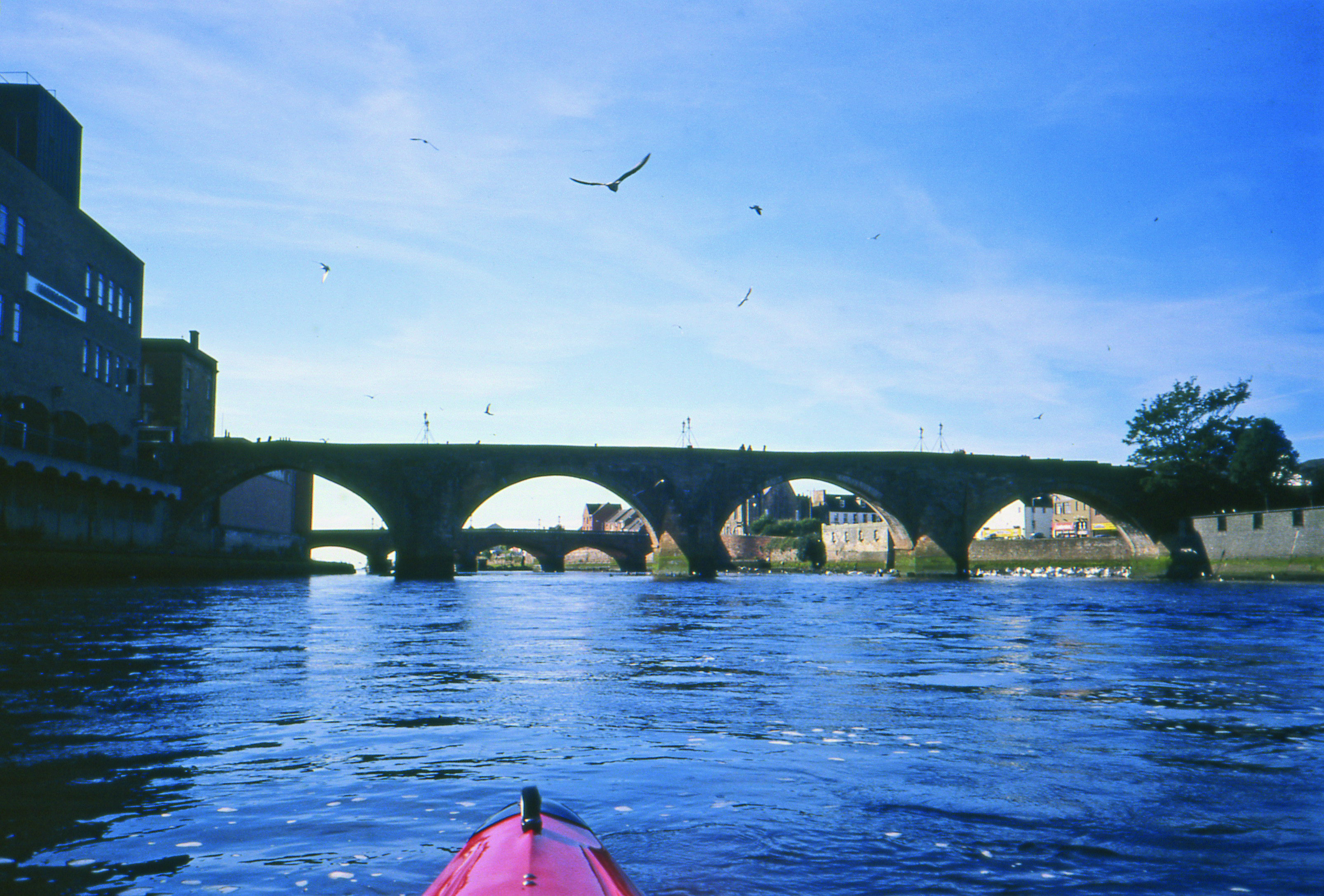 The Brigs of Ayr

Ayr and Robert Burns are inseparable. Burns Cottage is where he was born in 1759 and lived until 1766. There is a Robert Burns Birthplace Museum. Nearby is a Burnsiana museum. The haunted Alloway Kirk, a ruin in Burns’ day, is where his father, William, is buried, inspiring the poem of Tam o’ Shanter, who saw dancing witches and warlocks through its windows.

The Auld Brig o’ Doon, possibly 13th century, is a single arch. It is where Tam’s horse, Maggie, lost her tail to the Cutty Sark witch and is accompanied by a Burns monument of 1823 and gardens with statues of his characters. The Tam o’ Shanter Museum is in the former brewhouse supplied with malt by Douglas Graham of Shanter Farm, alias Tam o’ Shanter. The Auld Kirk in Alloway, built in 1654 with notable lofts and its original canopied pulpit, is where Burns was baptized and sometimes attended.

An Ayr name less well known but more often quoted is that of John Loudon McAdam, born in 1756, although his tarmacadam for road surfacing was not patented until the 20th century.

The St John’s Tower is the remains of the Burgh Kirk of St John the Baptist where the Scottish Parliament met in April 1315 after Bannockburn to confirm the succession of the Scottish crown.

Burns’ Brigs of Ayr describes two notable bridges over the River Ayr. The 13th century Auld Brig, rebuilt about 1470 and restored in 1910, was the scene of the 1601 battle between the Kennedys of Bargany and Cassillis. The New Bridge was built in 1788 and rebuilt in 1878 after being washed away by floods.

Beyond, Prestwick is one of the oldest burghs in Scotland, from 983 James VI claimed, now contiguous to Ayr in one long sweep of housing. St Ninian’s Episcopal church was built in the 12th century by Walter, High Steward of Scotland, and has the graves of knights templar, several provosts and many freemen with a mort safe to deter body snatchers.

Although moved from its original site, the Mercat Cross is probably 13th century and one of the best preserved in southwest Scotland. Robert the Bruce improved from a leprosy-like skin disease after drinking water at Bruce’s Well. There are also the ruins of the chapel of a royally founded leper hospital.

Prestwick hosted the first dozen golf British Opens from 1860 and also many Amateur Championships. The club itself was founded in 1851 and members have included Eisenhower and the Duke of Windsor. The Open has been won by Old Tom Morris, aged 46, and by Tom Morris Junior, aged 17.

On the north and east sides the town is bounded by Prestwick airport, the 'Tartan Gateway' to Americans as it can take jumbo jets and is the only fog free airport in Europe, a better airport than Glasgow but not so well located for the largest Scottish conurbation.

It boasts being the only place in Britain to have been visited by Elvis Presley, in 1960. It has applied to become the UK spaceport although Machrihanish, near Campbelltown on the Mull of Kintyre, has a strong case, having been a nominated emergency landing site for the Space Shuttle.

Much of Scotland's coastal history is spread around places which are much smaller, which you need to search out.