The history of district tartans The Isle of Eriskay tartan

How genuine are district tartans? Brian Wilton MBE explores the history of district tartan, looking at how many exist in Scotland and further afield, and which can be considered genuine.

How genuine are district tartans? Brian Wilton MBE explores the history of district tartan, looking at how many exist in Scotland and further afield, and which can be considered genuine.

“Every Isle differs from each other in their fancy of making Plaids as to the stripes in breadth and colour. The humour is as different through the mainland of the Highlands, in so far that they who have seen those places are able at first view of the man’s Plaid, to guess the place of residence.”

Thus, was born the concept of District Tartans which was enthusiastically embraced by tartan historians and weaving mills. Their existence seemed quite logical: they were designs dreamt up by the local weaver using yarns dyed with what natural materials were to hand. Those that proved popular with the local inhabitants would predominate and in time, identify the wearers as coming from that particular Scottish glen or settlement.

As a Highland community, almost all of those living in that glen or settlement, would be kith and kin; connected by blood or allegiance to the head of the family — the Chief of the Clann. With the passage of time, that tartan would be looked upon, less as representing the locality and more as representing the people that wore it - the members of that clan. If that scenario was replicated across the hundreds of clan communities in the Highlands, then it offers a plausible explanation as to why we can’t clearly identify any genuine ‘old’ district tartans and why we had to wait until those legendary weavers, Wilsons of Bannockburn, invented, reinvented or possibly rediscovered them. During the period 1765 – 1924, they were known to have ‘searched the Highlands for old patterns, to re-introduce under names of their choosing if the original clan or district could not be determined.’

Despite us being unable to confidently identify any authentic district tartans that escaped the transformation into clan tartans, time has lent credibility to all those possible usurpers and their lineage is no longer questioned. Joining their ranks have been a sprinkling of other bona fide old tartans which at least have some documented history attached.

Some fancy tartans by Wilsons that were named after places

Dates are when woven.

*Astutely, Wilsons appear to have changed the names of some tartans depending upon where they were being sold. Denholm in the Scottish borders is 65 miles away from Durham!

Lennox was, until the mid-nineteenth century, an extensive district to the north of Glasgow that included Loch Lomond. A 16th-century portrait of the claimed Countess of Lennox was wearing a tartan dress, the pattern of which was eagerly transcribed in 1893 and declared the Lennox District tartan.

The second example is that of the Ulster tartan: in 1956 a fabric was uncovered in a peaty soil bank in the townland of Flanders in County Londonderry. It was dated 1590 – 1650 and thought to have been worn by a Galloglass (one of the elite medieval Scottish mercenary warriors). Despite there never being any evidence of indigenous tartans in Ireland, once that design was extrapolated, it was confidently declared the Ulster district tartan. 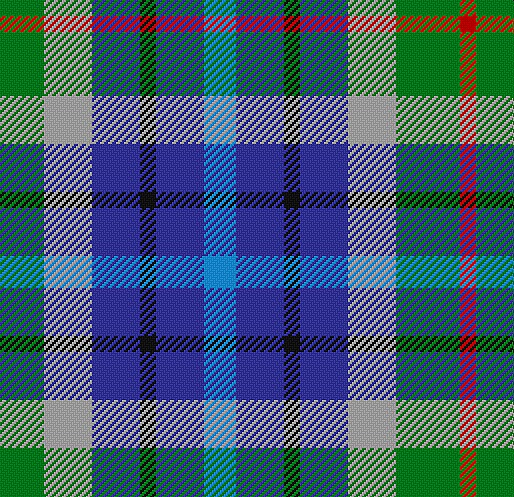 Unlike the earlier alleged district tartans that had no documented design rationale, after a watershed of 1950, new district tartans tended to document the designers’ rationale. This departure from the traditional, usually comprised very simplistic design features such as blue for the skies or oceans, green for the fertile lands, brown for the extensive forests etc.

Whilst there is still scope for such simple design elements, there is now a tiny school of designers who grasp the great potential of thinking ‘out of the box’ and incorporating meaningful historical – as well as geographical – elements. Features from the past and the present that combine to produce a textile design that has meaning, that has import and that will, in the future, serve as a window on the past. One of the simplest examples of that is the City of New York tartan (left).

Designed in 2002 by Alistair Buchan, it was later modified to incorporate two black lines to commemorate the tragic loss of life in the 9/11 Twin Towers disaster. In a hundred years’ time when we are all gone, that tartan will still be here and so too will those black lines to remind future generations of that historical outrage.

On to things more cheerful! As touched on earlier, despite coming from the same Celtic root stock as we Scots, and logically being exposed to the same Celtic artform of tartan, not a trace of indigenous tartan has ever been discovered in any of the Celtic settlements of Ireland, Isle of Man, Wales, Cornwall, Brittany and NW Spain. Growingly mindful of those roots in an age of burgeoning nationalism, each of those countries and regions has since acquired its own modern tartans, some of which are being used to accentuate their Celtic provenance and their zealous hopes for the future.

This pinpoints one of the many benefits of modern district tartans in that they can provide a unique and attractive visual brand for town, city, region and even country. Branding that can be used for a multitude of purposes — to highlight historical connections; natural tourism attractions; modern achievements and, as hinted above, even political agendas.

They also create a distinctive identity for use by local businesses, schools, youth groups, Highland dancers and major neighbourhood events. For localities in the world of tourism, the district tartan can be ‘manna from heaven’ since it is the most obvious and most attractive memento that visitors can take away with them. Not only does that swell the tourism coffers by way of gifts and keepsakes, but also promotes the district to an audience far removed from the local area.

If any dissenting voice should be raised vis-à-vis ‘Irish’ tartans — a quick database filter will reveal over 120 but they’re not what they seem! Early 20th century ones were mostly introduced by commercially minded Irish or Scottish weavers and are almost all variations of extant Scottish clan tartans. Those that aren’t, have been special modern designs, hoping to find favour with the huge Irish descendant market in the USA. One tranche of such Irish tartans that have found that favour is that of the Irish County tartans from Scotland’s House of Edgar in Perth. Not one of the 32 designs were ever authorised or have any design rationale, but the artistry and aesthetics of each has – in 23 years – resulted in the range becoming the “unofficial official” tartans for the whole island.

An excellent example of a District tartan that maximises the benefits enjoyed by its locality is the Isle of Eriskay (above) a romantic tartan for a romantic isle! “The tiny Hebridean island of Eriskay has many claims to fame - the haunting Eriskay Love Lilt, the ancient breed of Eriskay ponies, the seamless Eriskay jersey; the real 1941 Whisky Galore island and the first Scottish footfall of Bonnie Prince Charlie in 1745. It is the last of these that forms the Royal Stewart basis of the Eriskay Tartan whose colours mirror those of the landscape, seas and sands of the island. One final touch is the pink for the sea bindweed that is uniquely present on Eriskay. Legend has it that it grew from the seeds inadvertently dropped on the beach when Bonnie Prince Charlie pulled out a handkerchief.”

So . . . a romantic tartan for a romantic island, tailor-made for gifts and mementoes. A most important point with all such ‘promotional’ tartans is the provision of a printed ticket explaining the rationale of the design. Without it, the tartan loses its romantic appeal and becomes little more than its historical predecessors – a meaningless fabric design.

On a much grander scale, many countries around the world continue to celebrate the disproportionate and pivotal input of the early Scottish settlers. Canada has over 100 district tartans for its provinces, regions towns and cities. A similar situation applies in America that sees very few US States without their own tartan.

Sorting the wheat from the chaff

‘Chaff’ is a convenient description of all tartans that haven’t been formally commissioned by individuals or organisations.  Some have appeared as stable mates of vanity publishing, never intended for weaving or commercial use but allowing the ‘author’ to bask in the limited glory of being ‘published’. Others have been designed by amateurs captivated by Scotland and its icons such as the blind English designer whose range of tartans includes those for eight well-known Scottish Lochs that may one day be accepted as genuine district tartans. The most problematical of the ‘chaff category’ are those that claim to be district tartans. That genre is akin to the early phenomenon of ‘cyber-squatting’ where ‘savvy’ individuals would register domain names of international brands that had been slow off the mark in realising the potential of the Internet.  There are many such claimed district tartans most of which have never been woven but which are often being cynically promoted as ‘genuine’ in the hope that unsuspecting buyers will appear.

Such then is a brief look at the complicated world of district tartans that stretches from centuries-old historical artefacts to the modern promotional and celebratory ones; to the romantic ‘fripperies and confections’ and to the morally questionable ones. In their own way, they all celebrate the living and evolving artform of tartan, brought to life over 4,000 years ago by those talented Celts.

District Tartans – how many?

If one counts the Scottish and overseas district tartans in the official Scottish Register of Tartans (SRT), they number around 750. However, that’s extremely misleading since this category is the greatest mishmash of wheat and chaff, the bulk of which is chaff of varying degrees. The reasons for this are many and varied: from an administrative viewpoint, on its inauguration in 2009, the SRT needed to populate its register and imported the tartan records from two sources, the major one being the Scottish Tartans Authority. That body’s database was ‘inherited’ from the long defunct Scottish Tartan Society whose aim in life – which the STA quite rightly adopted – was to create a ‘register of all publicly known tartans’ regardless of their official status.

However, the SRT’s remit was very different and as an official government facility, it would not register a District tartan unless it had been authorised by a regional, local or community authority or an established authoritative body. So . . .  since 2009 only 117 district tartans have been added to the Register to mingle with the great cloud of wheat and chaff gathered over the previous century or more.

Purely Scottish district tartans probably number around 100 but that’s open to debate — some are the traditional Wilsons of Bannockburn ones; others are a mixture of modern authorised or unauthorised; some have been accepted through use and wont whilst other haven’t and are of debatable status. 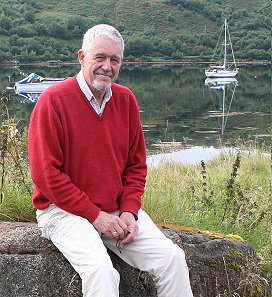 As Director of the Scottish Tartans Authority for over a decade and now running his own consultancy Tartan Ambassador, Brian is widely regarded as the leading world figure in the unique art of tartan design. His portfolio of over 200 tartans includes many high-profile designs for government departments, major corporations, armed services, European royalty, the Ryder Cup, international store groups, Scottish clans and a host of private individuals. With his meticulous research, innovative design elements and soulful rationales, he has taken the art into a new era that finds great favour in the modern world.

In recognition of his services to the tartan industry in Scotland he was appointed an MBE in Her Majesty Queen Elizabeth's 2013 Birthday Honours List.