The National Trust for Scotland imagine how a royal visit to Falkland Palace, said to be one of Mary’s favourite residences, might have involved the people who worked there.

In the palace of Falkland everything was in a state of turmoil, and had been since the Court had arrived from St Andrews a few days before. Queen Mary had come to Falkland to relax and join in the hunt for stags and wild boar, and the servants were hurriedly carrying out their duties in preparation for her return from the day’s sport.

To the royal household the young queen was still something of a novelty – only seven months had passed since she had landed at Leith. Many loved her youthful beauty and were captivated by her gay laughter, but there were others who doubted the sincerity of her intentions. Although Mary had been crowned Queen of Scots at the age of nine months, she had been brought up in the French Court and had reigned as Queen Consort of that country.

A feast fit for a queen

One who did not doubt his young queen was James Merschall, who was in charge of the royal larder. He had heard all the arguments of the reformers, who feared that a Catholic queen would endeavour to destroy the newly established religion. James detested the reformers and most especially their chief spokesman, John Knox. But he knew Mary Stuart would never follow the same course that her cousin Mary Tudor had followed in England, for nothing could be gained by burning the reformers at the stake.

He felt that his fair Scots queen would continue to follow the teachings of her own church; he also knew that her promise not to interfere with an individual’s right to follow their conscience was a genuine one. As far as James was concerned, the fire-breathing Knox could sleep peacefully in his bed, for no martyr’s blood would be spilt in Scotland.

So it was with a keen sense of devotion to his young mistress that James turned his attention to the task of organising the provisions for the queen’s supper table. His first visit was to the palace kitchen, situated next to the turnpike stair in the east range, where fine French cuisine was already being prepared for the evening meal. 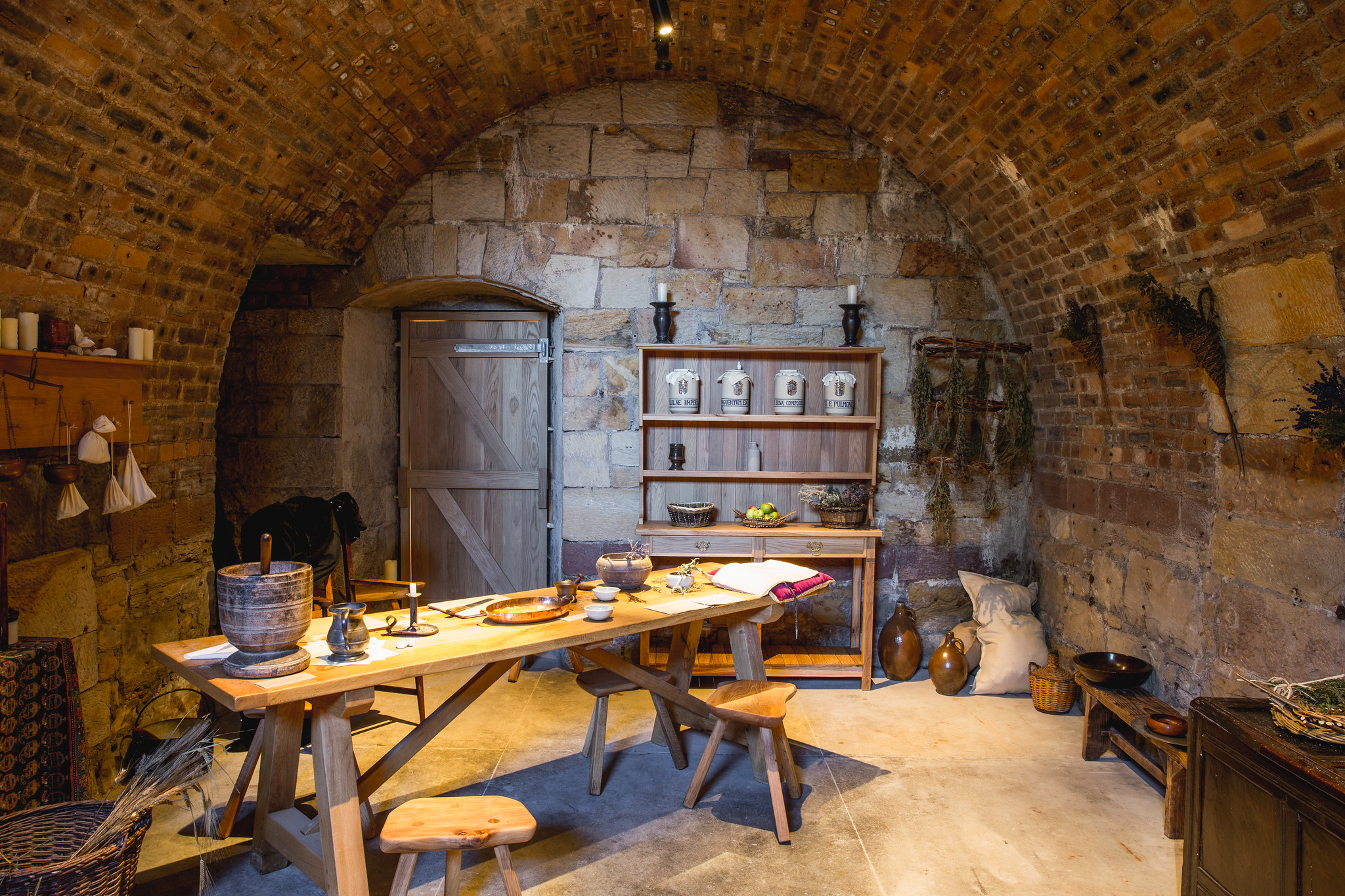 Everything in the great kitchen was as usual that day. The large open fire was filled with iron pots hanging on tripods blackened by the heat of the burning coals. Two large salmon were boiling in a huge pot in preparation for the servant’s meal. Salmon was commonly found in Scotland and James had often heard the servants complain about the number of times they had to eat it every week. The cook told James that the queen had ordered a supper which consisted of soup a la reine, followed by friars’ fish, then venison soaked in claret. The meal was to be rounded off with a confection of pears and apples mixed with the best French wine.

A haunch of venison had been sent to the kitchen the previous night as it had to be soaked in the claret for at least six hours before cooking. But James still had to supply the kitchen with veal, fowl and herbs – the main ingredients of the rich white soup, which Mary, Queen of Scots’ mother, Marie of Guise, had introduced to Scotland from France. He sent his young assistant down to the stank, or fish pond, to the west of the palace stables, to get the finest red trout for the dish known as friars’ fish, which also contained herbs, spices, lemon, anchovies and Rhenish wine.

As they were returning to the larder through the palace courtyard, James and the boy heard the blast of the hunting horn coming from far off in the great oaks of Falkland Wood. James could picture the scene as the young queen and her retinue gave chase to the stags. It would not be long until the royal party returned, ravenous for fine French cuisine. The horn was also heard in the royal apartments, where Mary Beaton, one of the queen’s ladies-in-waiting, was sitting by an open window. She was embroidering a small decorative panel which incorporated the royal emblems of Scotland, England and France – the thistle, the rose and the fleur-de-lys.

She gazed out of the window at the lush greenery – how she loved Falkland! Of course, her family had special associations with the place, as her father and his father before him had been hereditary keepers of the palace. How well she remembered playing hide-and-seek as a child with her mother, a Frenchwoman who had come to Scotland with Marie of Guise. So it was no surprise that Mary was picked to accompany the young Mary, Queen of Scots to France. 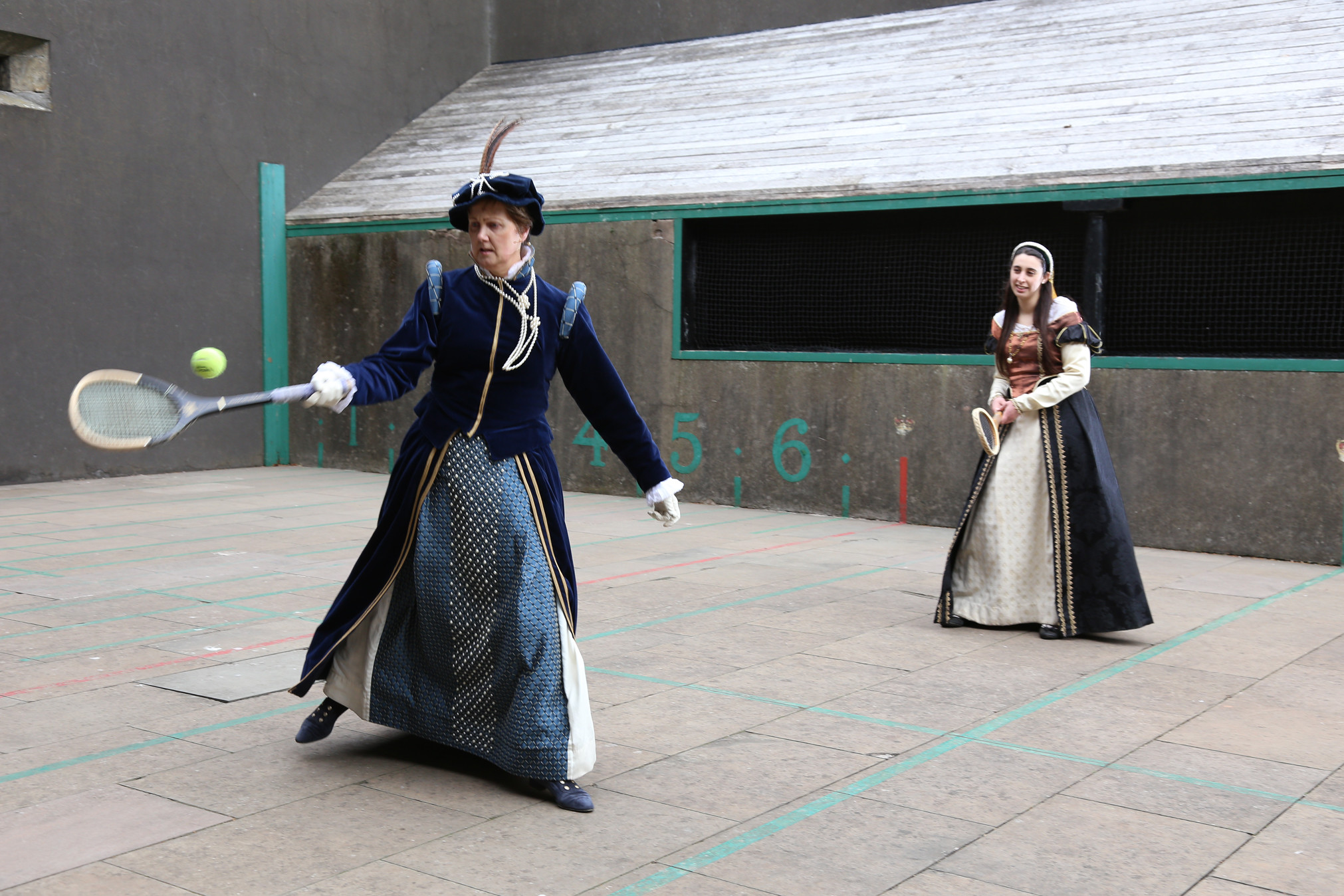 Mary Beaton had liked living in France but she sorely missed her native Scotland. Certainly, the little palace at Falkland could not compare with the grand French hunting palace of Fontainbleau, but the beauty of its architecture and its homely comforts endeared it more to her than the spacious elegance of any French chateau.

She put down her embroidery and rose to summon the ladies of the queen’s chamber, who would help her arrange the clothes which the queen would wear at supper that night.

They entered the room chattering excitedly of the news they had heard from one of the pages. Apparently the queen had killed three stags that day and the hunt was now nearly at an end. Mary quickly organised the girls in their work; the queen would soon return and would want to change from her fur-lined riding habit into a more suitable court dress.

Mary picked a black camlet (mohair) dress from the queen’s cabinet and laid it on the four poster bed, which was draped in velvet of the queen’s favourite green. The neck of the dress was stiffened with buckram, a coarse linen fabric, and mounted with white lace and ribbons. A little white ruff embroidered with pearls, a black velvet heart-shaped cap and a white gossamer veil were also laid out on the bed. From the queen’s jewellery chest, they chose a necklace of rubies and pearls with a belt to match and, finally, a little gold crucifix was laid on top of the veil. 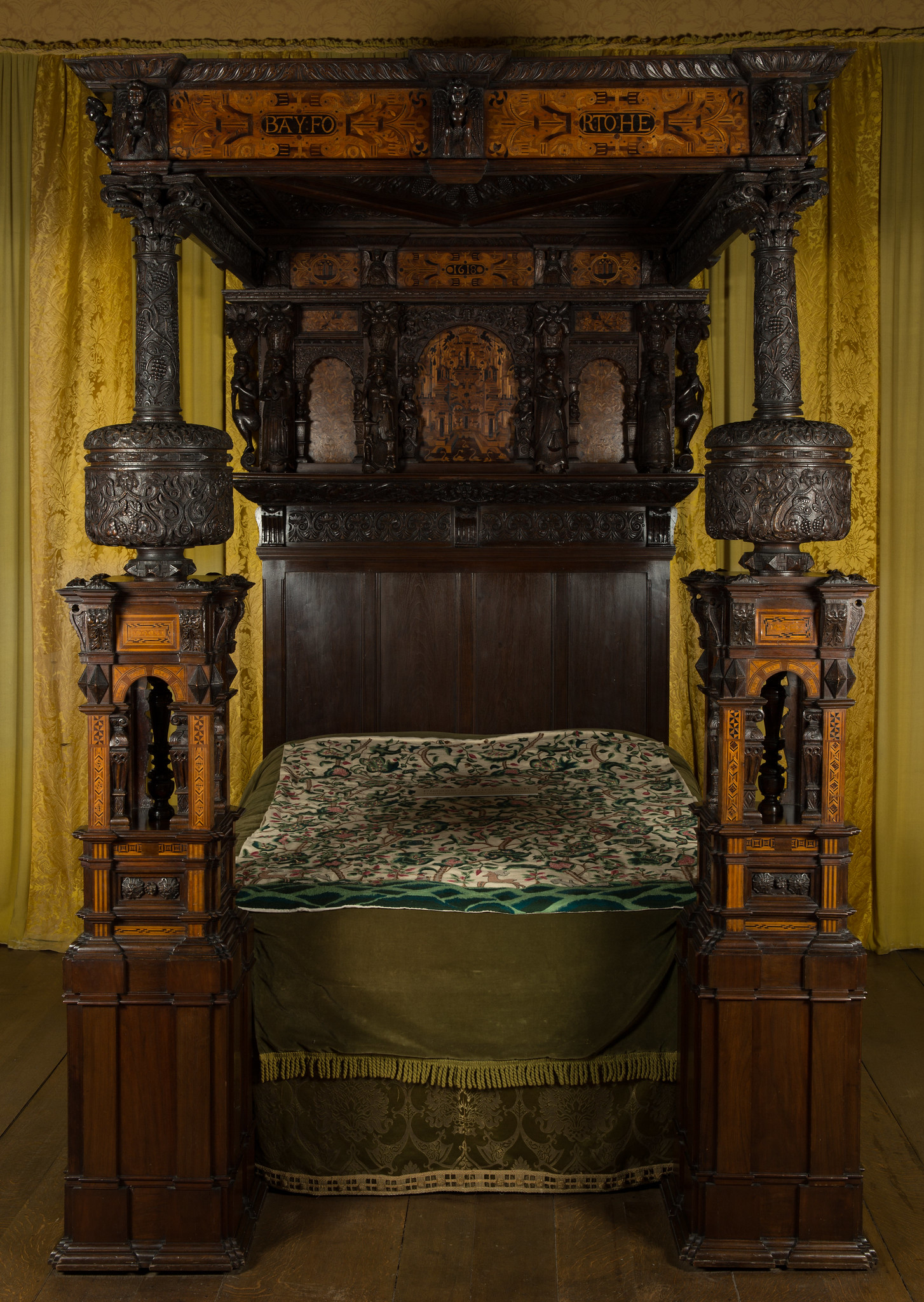 As the last touches were being put to this arrangement by the three bright-eyed girls, horses could be heard galloping towards the palace. The hunt was over and the queen, delighted with her success, would soon be with them.