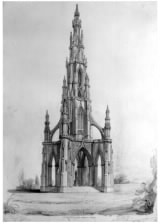 Morven Leese tells the story of the self-taught shepherd’s son (the author’s great-great-great uncle) who won a competition to design the Scott Monument in Edinburgh - the largest monument to an author in the world.

Morven Leese, author of George Meikle Kemp: Architect of the Scott Monument, tells the story of the self-taught shepherd’s son (the author’s great-great-great uncle) who won a competition to design the Scott Monument in Edinburgh - the largest monument to an author in the world. Every year the Scott Monument in Princes Street, Edinburgh, attracts thousands of visitors from all over the world. Those who climb to the top can view its intricate design at close hand and enjoy a spectacular prospect of Edinburgh.

Its architect, George Meikle Kemp, was from a poor shepherding family but in 1838 won a competition with his design, which was based on entirely self-taught knowledge of Gothic architecture.

He was celebrated in his day and a biography by his nephew Thomas Bonnar kept his name alive into the early years of the twentieth century. Today little is known about him, except by architectural historians who are aware of his innovative work, and Scottish Freemasons who honour him as one of their number.

George Meikle Kemp was born in 1795 near Biggar, Lanarkshire. He was apprenticed to a joiner aged fourteen, before setting out by foot to travel around Scotland, England and the Continent, where he worked from hand-to-mouth, and studied Gothic buildings. After setbacks in both his trade of joinery and his self-chosen profession of architecture he won a competition to design a monument to Sir Walter Scott. The monument became world famous and had a wide-reaching influence on other Neo-Gothic monuments, perhaps even including the Albert Memorial in London.

He supervised the construction of the monument but a few months before its completion in 1844 he died, aged 48, in a tragic accident in the Union Canal which caused widespread public mourning.

The circumstances of his death are not entirely explained, although he may have been the victim of criminals who infested the canal banks at the time.

George Meikle Kemp had a strange and rather contradictory personality. He was shy almost to the point of disability. In correspondence to friends he reported strange visions, including one of a heavenly figure and a huge horological device covering the sky. The architectural historian Charles McKean noted that some regarded him as ‘no more than a mad carpenter’. Nevertheless, despite his unusual personality, he made close and long-lasting friendships and he married and had a family. His literary interests were remarkably wide for someone who left school at fourteen - many of his letters and poems contain classical and literary allusions - and he played the violin. He was also an active Freemason. George Meikle Kemp became an expert in Gothic architecture by observing, drawing and, in some cases, memorizing the precise details of buildings. A contemporary Edinburgh Town Councillor described him in 1842 as ‘perhaps one of the cleverest men in the country as well as one of the most modest’. Samuel Smiles used him as a case study for his famous book of 1859, Self Help, and the architectural historian Harold Colvin described him as having ‘knowledge of Gothic architecture unrivalled in Scotland’.

However, despite his talents, he never became a part of the established architectural profession and his untimely death means that there is little of his work to see today, apart from the Scott Monument, a few architectural models in wood and some furniture (an example of which can be seen in the Writers’ Museum, Edinburgh). Some fine architectural drawings by him are held by The National Galleries of Scotland and Edinburgh Museums and Libraries, and copies can be seen in a number of nineteenth century books on Scottish topography.

So far as architectural output is concerned, his imagination probably needed the impetus of a new large-scale project. However, sadly for him– and for us – no such opportunity came his way before his tragic death just as he was beginning to find recognition. The Scott Monument remains the singular creation of a singular man. Its size, location and originality have made it an icon of Edinburgh and indeed of Scotland: a proud achievement for a self-taught shepherd’s son.

Morven Leese is the author of George Meikle Kemp: Architect of the Scott Monument, published by Lomax Press.