Author Gordon Anthony talks to History Scotland about 'World's End', the first in his series of historical novels set amidst the turmoil of the Roman invasion.

World's End is a work of historical fiction by author Gordon Anthony, set in the 1st century AD, as the Romans invaded Britain, encountering various tribes in their quest to subdue this outpost of the mighty Roman Empire. The book's hero Calgacus must find a way to halt the Roman war machine - but the conquering soldiers are not the only enemy he faces...

You are writing about a period for which we have few written resources. How did you go about researching this time in history to be able to convey it to readers in such rich detail?

My knowledge is based on a lifelong love of history, particularly ancient times. As well as reading history books by modern authors, I used to read the Penguin Classic translations of the works of Julius Caesar, Livy and Tacitus because I wanted to know more about those times. Later, I turned to more formal study with the Open University, where I was able to take a deep dive into Roman culture and history.

I used a lot of what I learned there when I wrote my first novel, In the Shadow of the Wall. That received a good reception, so I was looking for another Rome-based topic to write about. This involved reading a lot more books by modern authors, and re-visiting Tacitus and Cassius Dio. The lack of detail actually helps a fiction writer because there are usually only a few recorded facts about any particular episode, and sometimes those records contradict one another. This allowed me to build a story around a few events.

By the time I had sketched out an idea, the internet became a first source of research, mainly to confirm details on names and dates, and also to check on details which cropped up once I started writing. For example, what type of saddle did the Britons use? Or how was the suspension on a chariot constructed? How did they build their homes, and what sort of crops did they grow?

Sometimes I found myself going down rabbit holes of research simply to find a small piece of background which might only fill a sentence or two, but I think readers appreciate having stories set against authentic backgrounds, so I never regretted spending time on that sort of research.

The book’s hero Calgacus is a man of many parts, with both immense strengths and relatable weaknesses. Is he based on someone you know?

Not at all. He was devised to fit the needs of his story. He needed to be a warrior first and foremost, and he needed to be a person with some standing in British society, so that part was easy. As for his physical prowess, that’s actually a little bit of a private joke. When I was younger, I was a great fan of an author called Alistair MacLean who wrote many fantastic adventure stories, some of which were turned into blockbuster films. I recall reading an interview in which he modestly asserted that most of his stories had similar elements. One thing he admitted to was that his main hero always had a big, strongman sidekick. This is something I’ve noticed in other stories as well, so I decided to turn things around, making Calgacus the big, strong one, and his friend, Liscus, a more diminutive, if equally fierce, character. I even gave him a derogatory nickname to reinforce this move away from the stereotypical partnership.

These days, of course, the advent of superhero movies has established the strongman as lead character as the norm, so maybe I was just following a trend after all.

For me, though, characters are created in order to advance or carry the plot of a story. Even where I am writing about known historical figures, it is often possible to give them characteristics which create plot tension because so little is actually known about them.

As the book progresses, you gradually reveal to the reader that the power struggles are much more sophisticated than simply being a case of Briton against Roman. How important was this situation in terms of the plot and characters?

This was an essential part of the storyline, and it was helped by the historical knowledge that many British tribes were often at war with their neighbours. It also allowed me to introduce various conflicting viewpoints as different characters acted in accordance with their personal aims. From the point of view of a fiction writer, this internal conflict was a boon. When you read a detective novel, you often find that the main protagonist has to battle his or her own boss as much as the criminal.

For my story, being able to use conflict and opposition from other British tribes really helped. We know from Roman records that many tribes did side with them, or at least did not oppose them, and archaeological finds have revealed several hoards of Roman coins were in the hands of British tribes, perhaps the product of Roman diplomatic bribes. Whatever the truth behind all this, the Romans rarely faced united opposition, and that really helped me whenever I needed some conflict in the storyline.

What would you say most separates the area that we know now as Scotland from the rest of Britain during the period in which the book is set?

Probably not a great deal. They were all Celtic tribes, although those in the southern part of Britain probably had a lot more contact with Europe and especially the Romans. There may well have been differences in customs, dialects and so on, but I think they had a great deal in common culturally. The southern tribes may have been wealthier, and may have seen themselves as more cultured, but they were probably little different to those more northerly tribes who perhaps lived a more rural, scattered existence.

I think this probably had more impact on the Romans themselves. Britain was, as the title of my book is intended to show, very much beyond the borders of the known world. The further north they went, the further from civilisation they felt they were. This is, I think, reflected in the way they described the northern tribes as painted barbarians, but we should not forget that Julius Caesar made similar observations about the southern tribes when he first attempted to invade Britain.

I got a sense that the way in which the druids are portrayed captures them at a point when they still have power and prestige, but people are beginning to question who they are what they do. Would you say that’s a fair assessment ?

I think that’s very fair. Of course, pretty much everything we know about the druids comes from Roman sources who were very hostile, since Rome usually insisted on religious conformity. The druids represented a threat, and so were painted as barbaric in their customs. Again, that picture helped me create narrative conflict, and it suited my purposes to have Calgacus placed in direct opposition to the druids, although I did try to present some druids as having different perspectives.

I don’t suppose we’ll ever really know whether they were the way the Romans portrayed them, although the evidence from bog bodies confirms that human sacrifice was certainly not unknown in ancient Celtic societies. Whatever the truth, I don’t think there can be any doubt that the druids were influential, so I could not tell this story without giving them a prominent role.

And finally, what first sparked your interest in the interactions between Britons and the Romans during this turbulent period?

There were actually a couple of things which gradually came together to inspire the Calgacus series. During my Open University studies, it became clear to me that, of all the Roman provinces we examined, Britannia was the most un-Roman of them all. While some Britons adapted to Roman lifestyle, a great many did not, or did so only reluctantly. When you consider that the whole of North Africa, from Libya to the Atlantic coast, required only one Legion to maintain order, then the fact that Britannia needed at least three, and often four Legions, shows just how much of a frontier zone it was.

Then, when reading a book on the Roman conquest of Britain (actually only the initial conquest of what later became southern England), it struck me that there was scope for creating a series of stories about the campaigns to conquer the whole island. It took the Romans nearly 40 years to reach what later became Scotland, and they suffered many setbacks on the way. I decided that I needed to avoid the usual story where even a British character needs to join the Romans. Readers like their heroes to be on the winning side, so most fictional accounts are told from the point of view of a Roman or a Briton who joins the Romans. However, I felt there was plenty of scope to create a British character who would be responsible for the many British successes.

Of course, anyone with a knowledge of early Scottish history will recognise the name of Calgacus, and will no doubt realise where the series will lead him. They need not fear that it will all end in failure, though. I managed to create a story where, like all good fictional heroes, Calgacus comes out on top in the end. 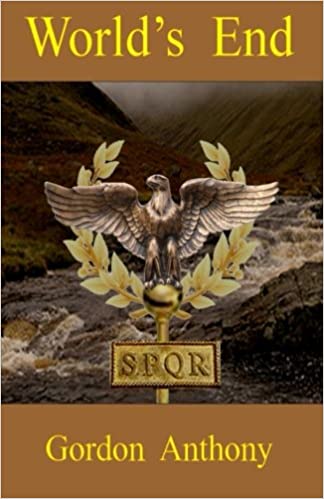 World's End is the first in Gordon Anthony's Calgacus series:

Meet a new hero. As the invading Romans destroy his world, Calgacus must find a way to halt the invincible war machine. But as he strives to unite the tribes of Britain, he discovers that the Romans are not his only enemies...

Get your copy here.