Interview with Euan Macpherson, author of The Trial of Jack the Ripper: The Case of William Bury (1859-89) Euan Macpherson talks to History Scotland about his research on William Bury and explains the evidence that leads him to believe Bury may also have carried out the Jack the Ripper murders in London, during his temporary stay in the city.

A shocking and brutal murder had taken place in the city in February that year, and the words 'Jack Ripper is at the back of this door' were found written in chalk on a door at the scene of the crime. When he was arrested, the accused, William Bury, admitted that he was 'afraid he would be arrested as Jack the Ripper'.

In the month before the trial, the local newspapers in Dundee began to run sensational stories linking the accused with the notorious Whitechapel murders. When the trial opened to a packed courtroom, many in the public gallery were wondering if the man standing in the dock was none other than Jack the Ripper himself.

Here, Euan talks to us about his research on William's life and crimes and explains why he has reached the conclusion that Bury is likely to have carried out the Jack the Ripper murders.

How did you become aware of William Bury?

There had been rumours circulating in Dundee for a long time to the effect that the city of Dundee was responsible for both Frankenstein and Jack the Ripper. The city claims ownership of Frankenstein because Mary Shelley took holidays in Dundee (to visit the Baxter family) during her youth. There was also a story that Jack the Ripper came to Dundee and enjoyed playing cards with his friends over a large wooden crate. They did not know that there was the body of a dead woman inside the crate.

I did not believe either story. Mary Shelley may have come to Dundee but there is no evidence she ever went home with a great idea for a new story. Likewise, the story about Jack the Ripper seemed a bit implausible. People of all ages and both sexes get murdered in cities – what’s unusual about murders taking place both in Dundee and in London?

I had started doing freelance writing as a student at Stirling University. Wondering if there was sensational scoop in the Ripper story (but not really expecting to find anything), I went to Central Library, Dundee, and asked to see their local newspapers for the years 1888 and 1889.

I was shocked at the way the dates matched up. Jack the Ripper was active in London between August and November, 1888. William Bury was living in Spanby Road, Bow, at this time – next door to Whitechapel. In January, 1889, he got on a boat and sailed to Dundee.

Moreover, William Bury was not a Londoner. He was a Midlands man and was living in Snow Hill, Birmingham, in the autumn of 1887.  Sometime between then and Easter Monday, 1888, he had moved to East London. What stood out was the fact that Bury was not living in London before the “Ripper” murders began and moved away as they ceased.

What made you return to this research after 17 years?

The circumstantial evidence was much stronger than I had expected: very excited, I wrote a book about the Bury case. Two Scottish publishers – Richard Drew and Mainstream – expressed an interest. But the year was 1987. Books about Jack the Ripper stared coming out in advance of the centenary of the murders! As I was typing my last chapter, both Richard Drew and Mainstream told me that 7 books had already come out and the market had been flooded; my book was no longer a commercial proposition.

I was devastated – I had spent time and money researching this book. Nobody was saying that it was a bad book. Nor was the Bury case being covered anywhere else. The book was not being published because I was a year too late, and for no other reason.

I was forced to put my manuscript away and forget about it until a friend encouraged me to pick up the project again, 17 years later. Then I realised what looked like a terrible calamity had actually been good fortune. After Bury’s trial in Dundee, the case files had been closed for 100 years. When I went back to the Scottish National Archives in Edinburgh, suddenly I was shown boxes of material that I had never seen before. The delay meant that I was able to write a better book in the end.

What can you tell us about William’s wife Ellen?

William Bury married Ellen Bury on April 2nd, 1888, in Bromley Church (East London). What did Ellen know about her husband? What clues has she left for us?

How likely is that William Bury might have gone on to kill again, had he escaped prosecution?

The first thing to understand about William Bury is that he was a proven murderer. Whether or not you believe he was Jack the Ripper, he was guilty of the murder that took place in Princes Street, Dundee, on 5 February 1889.

This was not a sudden crime of passion which the murderer instantly regretted. He had amused himself by physically abusing his wife and stealing her money. When the money had gone, he killed her as if he had grown bored with her. Yet, at the same time, he presented a very different image to others. In public houses, for example, he gave the impression that he was a thoughtful and considerate husband who was attentive to his wife. This suggests he knew what he was doing – he was creating a public image which was the opposite of the destructive psychopath that lay underneath.

He was sacked by every employer he worked for. That, alone, does not make him a sociopath but it does show that he lacked respect for others. He destroyed the life of his wife but lacked the empathy to see or understand that. Nothing in William Bury’s life gives us glimpses of normal human emotions such as remorse. If he could not empathise and could not feel guilt then the chances are very high that he would have murdered again.

What is the key piece of evidence?

The most significant piece of evidence is the modus operandi. Jack the Ripper strangled his victims and then mutilated the bodies afterwards. William Bury strangled his victim and then mutilated the body afterwards. Over the years, there have been 101 suspects to the crimes of Jack the Ripper but only one is known to have committed murder with the same M.O. - and that man is William Bury. 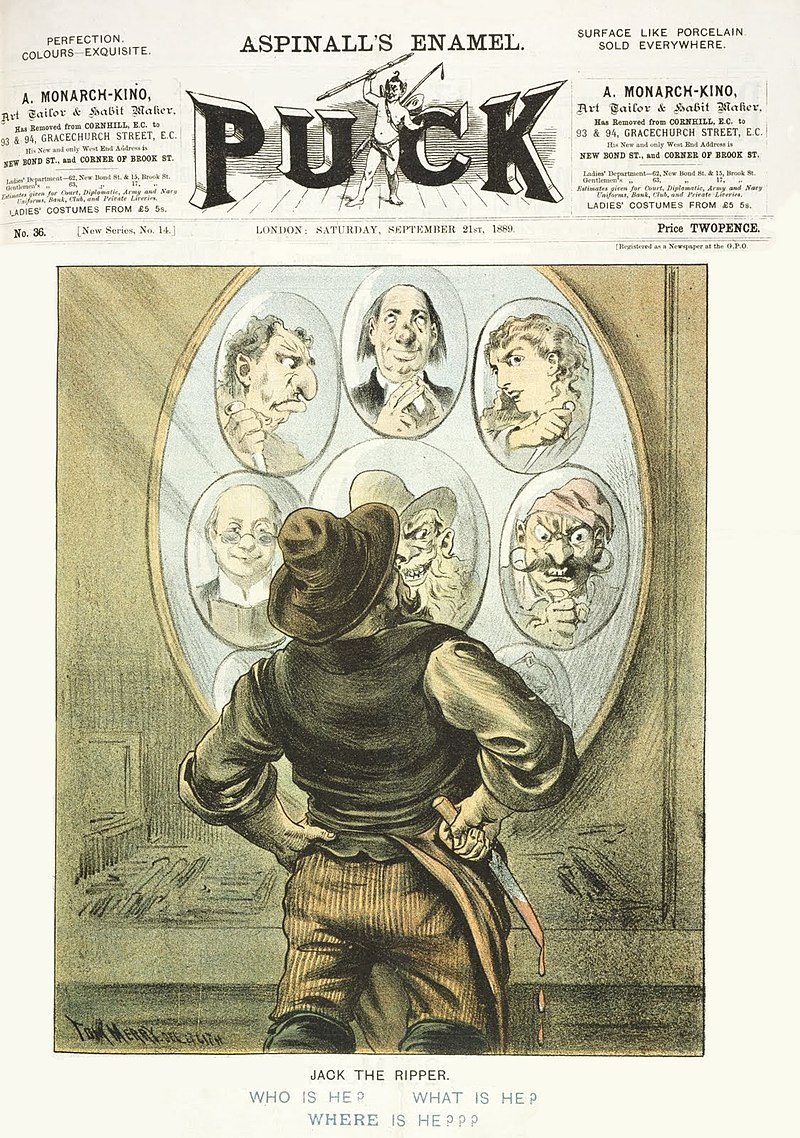 Speculation as to the identity of Jack the Ripper: cover of the 21 September 1889, issue of Puck magazine, by cartoonist Tom Merry

The words “Jack Ripper is in this seller” [sic] were found written in chalk in the basement of the property Bury occupied in Dundee. The Dundee Advertiser stated that the chalkmarks were older than the discovery of the body. Therefore, it was impossible for someone else to have done this after news of the murder leaked out. That only leaves William Bury as the author, perhaps enjoying his notoriety for a moment by writing this secret on the wall of his basement. He never erased it: it was there when the body was discovered.

Finally, there were no “Ripper” murders in London before Bury arrived in the city and none after he left – but there was a murder in Dundee. The circumstantial evidence points to Bury.

Do you think, if William had been tried in England, the case would have unfolded differently?

He came to Dundee to put a lot of miles between himself and London. If he had murdered Ellen in London, there would have been plenty of witnesses to describe his violent treatment of her.

Again, if he had been tried in London, the same police officers who were investigating the crimes of Jack the Ripper would have been investigating him. Detectives Reid or Spratling, who were scouring London for Jack the Ripper, would surely have taken more than a passing interest in William Bury had his crimes come to light.

Bury cleverly took himself into another jurisdiction where he knew the police officers would not have been familiar with Jack the Ripper. This is probably the reason the mystery still exists today. He was tried for the crime he committed in Dundee… but for nothing else. Newspapers such as The Dundee Advertiser wrote stories linking Bury with Jack the Ripper but this was never part of the police investigation.

The City of Dundee Police pursued Bury for the crime he committed in Dundee. They did not try to match his activities in London with those of Jack the Ripper. Were they being negligent? Or were they being professional by focussing on the crime the took place in Dundee and obtaining a conviction for it?

130 years later, historians and criminologists may wish they had taken a bit more interest in Jack the Ripper but, at the time, the Dundee police probably just saw it as an unpleasant incident to be dealt with as quickly as possible.

How does William Bury compare with the other “Ripper” suspects?

There have been a lot of exotic suspects for the “Jack the Ripper” murders – Montague John Druitt, a barrister, Prince Albert, Duke of Clarence, William Gull who was Queen Victoria’s surgeon. Walter Sickert, artist, is another. On a more mundane level, there is the likes of Neill Cream who was a convicted poisoner.

More than 100 years after the event, when all the witnesses are dead, authors are free to point the finger at anyone in the knowledge that they cannot be sued for slander. Of all the suspects, only one is known to have murdered with the same m.o. as Jack the Ripper: that man was William Bury. William Bury was also in London at the right time, arriving shortly before the first murder and leaving after the last one.

Whoever Jack the Ripper was, there is one thing of which we can be sure: this man enjoyed murdering and mutilating women. He would never have stopped. To find Jack the Ripper, we are looking for someone who was in London at the time of the murders and who is also known to have continued satisfying his blood lust afterwards. William Bury is one such man. 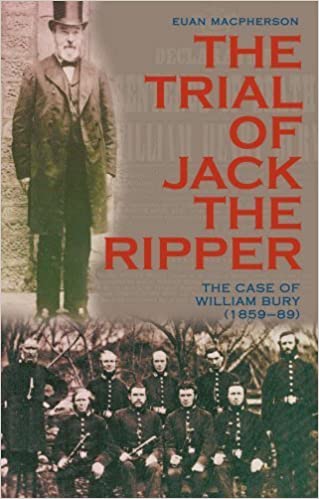 The Trial of Jack the Ripper: The Case of William Bury (1859-89) by Euan Macpherson is available from Amazon in paperback and Kindle editions.

In this sensational and ground-breaking book, Euan Macpherson presents the evidence that the long arm of the law really did catch up with Jack the Ripper ... in a dingy basement flat in Dundee in the cold winter months of early 1889.