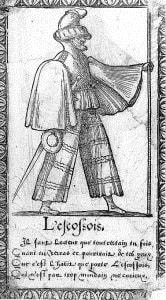 When Marie de Guise arrived in Scotland in 1538 to begin a new life with her husband King James V, she encountered fashions in clothing which were very different from the French court she left behind, as historian Annette Bachstadt reveals. ...

When Marie de Guise arrived in Scotland in 1538 to begin a new life with her husband King James V, she encountered fashions in clothing which were very different from the French court she left behind, as historian Annette Bachstadt reveals.

June 1538. After an exhausting sea crossing from France, Marie arrived near Crail-sur-Fife on the Scottish East coast. She was accompanied by the duke of Guise her father, her sister Louise, her ladies in waiting and many Frenchmen. They disembarked the galleys and moved towards castle Balcomie, probably passing fishermen, villagers and townspeople. But how did these Scottish people look?

The nobility of Scotland was well informed of the French fashion. James V Stuart, Marie’s royal husband, had seen Renaissance splendour in dress and architecture whilst travelling through France the previous year. He had brought to Scotland his first wife Madeleine, daughter of the French king, and Scottish noblemen and women likely wore French fashion, probably with a local touch in colours, materials or dress design. No pictures of any clothes worn in Scotland at the time of Marie’s arrival exist. The earliest images appear in an illustrated book published in Paris in 1562, by Frenchman François Deserps. Four prints concern Scotland and are divided in Lowland and Highland fashion. It might be surprising to some, but the picture of L’escossois or Scot (top left) shows no kilt, but baggy pants with tartan-like patterns possibly made of wool, and a short tunic with very large sleeves.

The man is bearded and armed with a spear or stick, a dagger, a long sword worn without scabbard, and a buckler. In his description, François Deserps notes disdainfully: "he is not worldly nor refined." However, the Scots headgear looks rather fancy. It is hard to tell if he wears shoes or some sort of tights. Maybe he is simply barefoot.

The image of the Scottish woman (right), claims Deserps, “is pictured exactly to the natural". She wears a dark corseted gown over a striped petticoat or shirt. With her right hand, she exposes the rich fur lining of her gown, and in the left hand she holds an oblong basket. An ample and light coloured cloak or veil covers her figure. Her headdress has a strange elongated shape like a baseball cap. It is probably the ‘boun-grace’ Sir William Brereton (1487-1536) mentioned during his visit to Edinburgh:

‘Some ancient women and citizens wear satin straight-bodied gowns, short little cloaks with great capes, and a broad boun-grace (a shade in front of the bonnet to protect from the sun) coming over their brows, and going out with a corner behind their heads; and this boun-grace is, as it were, lined with a white stracht [i.e. straight?] cambric [i.e. linen of Cambrai] suitable unto it.'

The Scottish townspeople Marie saw on her way to Saint Andrews in the summer of 1538 might have had the appearance of these two figures. Later in the 1540s, Marie de Guise was also to discover what François Deserps called ‘the savages’: the Highlanders.

Two printed engravings in his book (left) show the ‘savage woman of Scotland’ wearing a large coat made of sheepskin, and the ‘savage captain’, a bearded, long-haired archer carrying under his right arm an unstrung bow, a bunch of arrows - and no bagpipe!

The Scottish archer also carries a decorated bag, probably an ancestor of today’s sporran, and a large Irish-style sword in a sheath. He wears his flared high boots and what looks like a tunic on seemingly bare legs. The herringbone pattern cape is lined with fringes, and on his head sits a helmet with a globe or ring, surmounted by what appears to be feathers.

Many Scots came to France to serve the French king as archers and soldiers. Deserps’ Parisian account may therefore represent existing Scottish clothes, even if imaginary elements are possible. But as there are no Scottish sources, these are precious witnesses of Scottish clothing in the 16th century.

To find out more about the life of Marie de Guise, visit Annette's website.

Scourge of Henry VIII: The life of Marie de Guise by Melanie Clegg