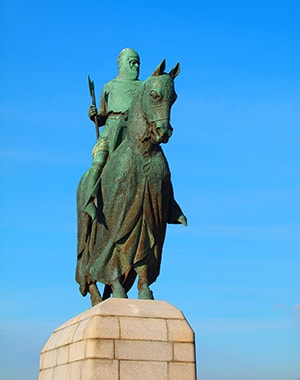 The battle of Bannockburn, fought over two days in June 1314, still holds significance for Scots 700 years later, for a number of reasons:

• The battle stands out in the pre-1707 history of Scotland as one of the few instances when the Scots won a decisive victory over a much larger invading army, and the only one when they did so in the open field.

• Bannockburn was also only the second time in European history that an army consisting of mostly infantry won victory over a mounted host; it was a victory against the odds which gave Scotland valuable breathing space and a new dynasty.

The battle was actually unwanted; until then, the Scots had avoided meeting the far larger and better equipped English armies in the open field and relied on guerrilla tactics for their successes. But we must never forget that since he knew an English army would try to relieve Stirling Castle in 1314, Bruce had a long time to prepare the ground of the battlefield beforehand. Victory confirmed the rule of Robert I in Scotland (if not in London or Rome) and set the foundations for an invasion of Ireland, a mooted rebellion in Wales, and the Bruce and Stewart dynasties. Even though some Scots deserted to the English side on the night before the first day’s battle, to contemporaries a victory for Bruce must have meant that God was on his side. He was no longer a usurper.

Importantly, the battle of Bannockburn would remain present in the mind of Scots in the centuries that followed as an example of what could be done if people stood together; as proof that superior armies were not invincible, that ingenuity and tenacity could turn a seemingly hopeless situation into victory. For those reasons it is still annually commemorated and it has become part of Scottish national identity, an important defining moment in our national history.

Given all of this, it seems quite remarkable that even today we are still not quite sure about where all of the different elements of the battle were fought. Certain topographic markers, like the castle and the New Park, are known but the rest is fought over amongst commentators. Battlefield and war dead commemorations are relatively recent developments (at least in historical terms) and it is quite remarkable that by the time Archdeacon Barbour was writing The Brus in the 1370s, he felt confident enough to invent an entire extra division for the Scots army, led by the father of his patron, King Robert II.

Does this indicate that only sixty years after the great victory the majority of people had already forgotten the salient points about the battle order across the two days?

Why then should we be surprised that the precise locations of all of the different elements of the battle have also become lost?

Despite these minor difficulties, the battle of Bannockburn remains a matter of pride – and hope – to those with an interest in our nation’s history and future.