The families and clans of Scotland have a long and distinguished history; many came over with the Normans, while others, whose ancestors arrived on north-eastern shores of Britain in the eighth and ninth centuries, initially as Viking invaders, eventually settled and made Scotland their home. Even more distantly, some can trace their ancestry back to Pre-Roman Celtic times.

The Campbell family of Argyll are typical. According to some sources, their first known ancestor was a Norman knight by the name of de Campo Bello, (whose name means ‘beautiful field’ – his first given name is not known); he arrived with William in his conquest of Britain in 1066. However, as his name is missing from the Roll at Battle Abbey it seems unlikely that he fought at Hastings, but would probably have been a second or third generation Norman immigrant.

Whatever the truth, by the year 1320 Sir Nigel de Campo Bello was a member of the parliament of Robert the Bruce, (sometimes known by his Norman French name as ‘de Brus’). The Campbell Earls are also the Dukes of Argyll, and the Chief of Clan Campbell, Torquil Ian Campbell, also styled the Marquess of Lorne, still resides at Inverary Castle.

The Hays of Perth

The Hays of Perth were yet another Norman family who arrived in Britain during the Conquest. They originated in the village of La Haye in the Contentin Peninsular of Normandy. Eldoun de la Haye, the son of the Count of Mortain (or Morteyne) was a companion of William at Hastings, and was granted extensive lands in East Anglia by a grateful Conqueror: his new possessions are recorded in the Domesday Book of 1086.

It is perhaps important to point out at this stage that surnames were unusual in Norman families – their custom was to take a name based on their birthplace, so that the aforementioned Eldoun, was ‘from la Haye’ (or ‘de la Haye’ in French). The family traces an unbroken and distinguished history right up to modern times. A case in point is Clan Chief,  Merlin Serwald Victor Gilbert Hay, (born April 1948), the twenty-fourth Earl of Errol. He is also the hereditary Lord High Constable of Scotland.

There are many other examples: several ancestors of the Leslie-Melville family of Midlothian, (now the Earls of Leven), have been  Lords Lieutenants of Nairnshire. They trace their line to Gillaume de Maleville, another Norman knight and combatant at the Battle of Hastings who eventually settled in Fife. He came from the village of Malleville in the Pays de Caux region of Haute Normandy in France.

The Ogilvy family of Angus trace their family line to Gilbert Ogilvie, son of Gillebride, the first Earl of Angus, who was granted the Manor of Ogilvy in 1172. His successors became Sheriffs of Angus and High Treasurers of Scotland. Royal links with the Ogilvy Clan were reinforced when Angus, the brother of Clan Chief David Ogilvy, married Princess Alexandra of Kent in 1963.

Scandinavian connections with Scotland are almost as numerous. Take the Ruthven family of Perth for example. Their forebears came from Norse stock and were fortunate to have been granted extensive lands in Ruthven and Tibbermore by King David I. They took their family name from the place, but were descended from Thor, (known as ‘Thor the Long’), son of Sweyn, the Viking chief who founded the Ruthven Clan. Over the centuries, that family climbed the highest echelons of society, with members being Privy Counsellors, as well as Governor Generals of Australia and New Zealand.

The Rollo Family of Duncrub have an equal claim to Scandinavian roots. Sigurd Rollo was a Viking settler, known to have seized the city of Rouen and beseiged Paris in the ninth century, before finally settling in Scotland. The Rollo surname is a Latinised version of the Old Norse personal name Rolfr, originating in the German name Hrodwulf, meaning ‘wolf’. The Norman version of the name appears in the Domesday Book as Rouli or Raoul.

Similarly, the Kerr family of Cessford owe much to their Norse ancestors. The surname may have come from the Old Norse word ‘kjarr’ or ‘kjrr’, suggesting either a marsh-dweller, or a dark, dusky person. An alternative explanation is that it derives from the Gaelic word ‘ciar’, meaning left-handed. The name went through several transitions, including Ker, Carr, Carre and Carres.

The Keith family of Dunnottar claim an even more antiquated origin, when a forebear from the Celtic Chatti tribe is reputed to have slain a Viking leader called Camus, and is traditionally referred to as Marbhachair Chaimus, which translates as ‘the Camus Slayer’. The clan were granted the lands of Keth by King Malcolm II as a reward.

The Scrymgeour family of Dundee have probably the most unusual clan name and lay claim to having one of the earliest Scottish origins. By tradition, they were said to have descended from MacDuff, the Earl of Fife, and claim to have been standard-bearers for the early Celts and bore sacred relics before the tribe into battle. The name Scrymgeour translates loosely into English as a swordsman or a skirmisher, from the Anglo-Saxon word ‘skrymsher’. This is similar to the Old French word ‘eskirmir’ or ‘escarmouche’, signifying a skirmish. It is from this source that the English word ‘scrimmage’, (as in a rugby ‘scrum’), is derived. 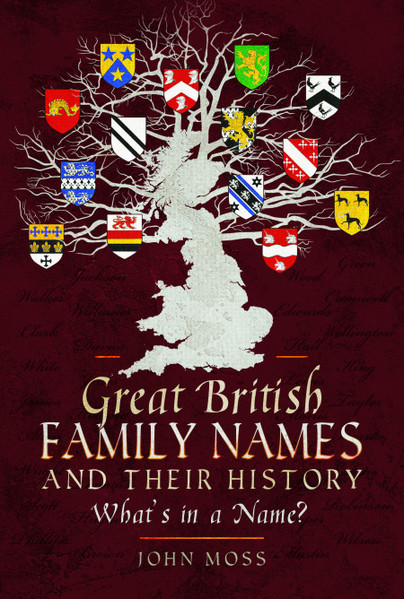 There are, of course, numerous other examples, but I have tried in my book Great British Family Names and Their History, to present a snapshot of some of the most typical and a few of the families who have played pivotal roles in the creation of the nation that Scotland is today. What I have written here is a small précis of its contents.

In the book I began by saying that some places are named after people(s), and some people are named after places. I believe it bears out this premise and supports the celebrated Doctor Martin Luther King’s assertion that... ‘We do not make history – history makes us’.

John Moss, May 2019. John Moss is the author of Great British Family Names and their History, published by Pen & Sword Publishing.

Find out more about tracing your Scottish ancestors with History Scotland's digital guide.

image of the Cuillins copyright JGriffiths