Simon Forder demonstrates how taking a multi-disciplinary approach to the study of the Romans in Scotland can change our perspective on this crucial period of British history.

In the “Agricola”, the Roman historian Tacitus tells the story of his father-in-law’s career. Gnaeus Julius Agricola, a paragon of Republican Roman virtue living in the 1stcentury AD, was a soldier who served in Britain in the time of the Boudiccan Revolt, and was involved in the conquest of northern England, Wales, and the destruction of the druids before being recalled from the province. Under the Emperor Vespasian he was returned to Britain as governor, and consolidated the conquests of his predecessors before advancing north into Scotland. His campaigns in the north, where his actions saved a legion from destruction and which culminated in the massive set-piece battle of Mons Graupius, where his legions fought 30,000 Caledonian barbarians, ended up with the whole of Britain being conquered, and after his recall to the continent to an honourable retirement, his conquests were abandoned.

At least that is what Tacitus tells us. Archaeologically, the only evidence that we have for Agricola in Britain is a single inscription believed to have been mounted in the forum of St Albans – which had been rebuilt following its sack by Boudicca – and believed to date to either 80 or 81 AD. Were it not for the survival of Tacitus’ work, we would otherwise know nothing of Gnaeus Julius Agricola.

However, the knowledge that there are marching camps stretching up in an arc across the north of Scotland, terminating on Speyside, combined with the archaeological evidence of the foundation of the legionary fortress at Inchtuthil, abandoned in Domitian’s reign has for long been considered irrefutable evidence to support Tacitus’ story, and Tacitus’ story used to explain the marching camps. These two pieces of evidence, mutually supportive, have been instrumental in providing us with a framework for understanding the presence and activities of the Romans in northern Scotland. But can we trust this? Are there other areas we can consider to help shed light on this crucial period in British history?

In the late 1990s and early 2000s, an extensive archaeological excavation was carried out on a marching camp on the outskirts of Kintore, in Aberdeenshire. It was the first such assessment of a marching camp on such a scale, and the results of this have in their own right dramatically changed our understanding of the Roman army on campaign. Instead of representing an overnight stop, this camp was in use for several weeks – perhaps even a couple of months, and as such represents a period in which the army campaigned across the area from this military base, dominating, fighting and taking tribute – as well as making treaties with local magnates. Critically, carbon dating has also revealed that this camp was occupied in the late 2ndor early 3rdcentury, over a century after Agricola’s time, and therefore almost certainly belongs to the campaigns of Septimius Severus.

Straight away, then, we can ignore all camps of this size as being anything to do with Agricola, leaving a much smaller set of camps, which are demonstrably earlier – but so far undated archaeologically. It is believed they are 1stcentury (and therefore assumed to be Agricolan) on the basis we have no evidence for any other Roman activity this far north. However, examination of Tacitus’ work reveals his assertion that Agricola took multiple legions and associated auxiliaries with him on campaign. And, when we look at 18thand 19th-century assessments of how many men could fit in an army camp of this nature, these smaller camps are less than half the size we should expect for the number of troops Tacitus describes.

Further examination of Tacitus reveals surprising parallels between Agricola’s career as governor and events recorded as taking place much earlier, and that according to Tacitus the fleet was acting in support of the army, which it could not have done if the army was dozens of miles inland, in areas where these smaller camps are to be found. So, despite the fact that Agricola was Tacitus’ father-in-law, and that Tacitus is supposed to have used official despatches to write his work, there are inconsistencies which cannot be reconciled with the archaeological evidence if we are to accept this story. 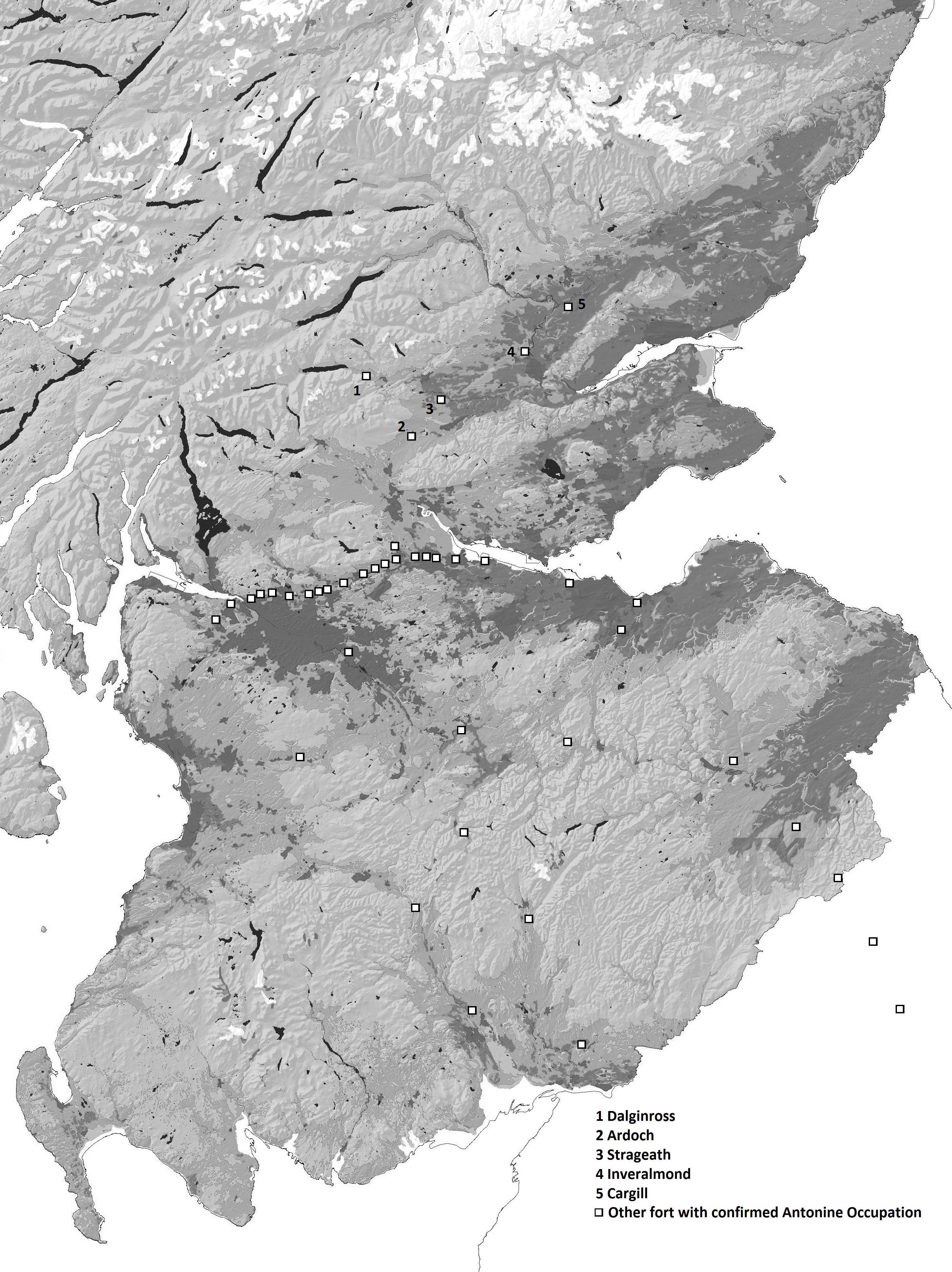 After the British garrison was reorganised to allow for troop withdrawals to the continent, resulting in the abandonment of north Scotland and return to the line of Hadrian’s Wall, trouble started, and under the Emperor Pius, the armies marched north once more, establishing a new frontier along the Forth-Clyde known as the Antonine Wall – and reoccupying a number of forts which extended the area of Roman control beyond Perth. Small settlements grew up in the shadow of the forts, and these were recorded by name in Ptolemy’s Geography of the 160s. One of these was called Victoria – which was clearly named after a victory – and was in the territory of the Damnoni. You see, Ptolemy also recorded the names of known tribes in Britain, how they related to one another, and plotted locations for many coastal features. Since Ptolemy allocated these towns to tribes, it is important to know where these tribes lived.

By examining the various types of land in terms of its agricultural viability, it is possible to see where the best land lay – and therefore identify how Ptolemy’s tribes may have been distributed. Although it is difficult to understand where tribal boundaries in the central belt may have lain, it is likely that the great natural features must have played their part. Identifying the territory of the Damnoni is particularly difficult.

However, it is clear that a large part of the Antonine Wall (originally established as a defensive line by Agricola according to Tacitus and in his time period by archaeological dating) fell within their territory. The remainder fell into the territory of their neighbours the Votadini. And yet there is no suggestion of any fighting as a result of this substantial occupation in Tacitus. It is equally clear that the territory must have extended beyond the Forth, indicating that perhaps the Damnoni occupied both sides of the Forth estuary and used the river and its tributaries as a major highway and trading route.

The implication of Victoria being in the territory of the Damnoni, and therefore probably lying in the area between the Forth and the Tay is that a major battle was fought after which the fort and town were named. And in all the accounts we have of the activity of the Romans in Scotland, prior to Ptolemy’s day, Tacitus’ account is the only major victory mentioned.

Study of the town names starts to reveal a few hints as to where they may have been. And, yes, it is possible to deduce a location for Victoria, and from this to draw conclusions about the possible location of Tacitus’ battle. By examining studies to do with logistics, how a Roman infantry army could have operated, it becomes clear that the army “marching light” as Tacitus describes had a maximum operating distance from base, and that was by no means in the vicinity of Speyside.

So, where does this all leave us? To begin with we have to challenge the veracity of Tacitus. There appears no way that an army the size that he describes could have marched into the north of Scotland to fight a climactic battle based upon supporting archaeological evidence. Indeed, by looking at logistics, linguistics, human geography, physical geography and archaeology, it is clear that if Agricola did command an army to a victory, it was on a smaller scale and further south than we have been led to believe. Given that Agricola was dead at the time Tacitus’ work was published, what was the author's motive?

And now we come to the final two areas which we have to consider - politics and literature. In 96 AD, the Emperor Domitian was assassinated, having alienated a substantial proportion of the senatorial class through his actions. Denigrated as a tyrant, it was politic to emphasise exactly how much he was despised and his activities were unacceptable. After the caretaker Emperor Nerva, Trajan came to the throne, and was considered far better by his contemporaries.

And yet under Domitian, the frontier of the Empire had been advanced in semi-legendary Britain, where Caesar and Claudius had conquered and Vespasian had campaigned as a general. This could not be borne, and so Domitian’s general, Agricola, was cast as an old-fashioned hero, showing all the attributes of a Republican paragon in direct contrast to Domitian’s tyranny. No wonder he was placed in honourable retirement by a jealous Emperor.

The “Agricola” is not a history, although it is a very good story. It is a political work, extolling Roman virtues, and to a certain extent an allegory to be used as an example of a “good” general. Accuracy in such things was not critical, as long as it did not denigrate important people like Agricola’s predecessor Sextus Julius Frontinus, who was still alive in AD 103 and had almost certainly played a far greater role in Britain’s conquest than is currently believed.

So, a multi-disciplinary approach is needed to gain a full appreciation of the past. We need to understand international and national context, literary purpose and bias, the landscape and how people lived in it, how things worked, why places were named thus in addition to archaeology and history. Without all this, we cannot really grasp what was happening – let alone why and when. Uncritical acceptance of texts at face value, and in isolation, whether those texts are modern or ancient, cannot be seen as good enough.

In Calgacus’ speech to the Britons as written and narrated by Tacitus, the probably fictional leader says “They create a desolation, and call it peace.” These are Tacitus’ words, the words of a senator emerging from the rule of a tyrant criticising the concept of Empire. They are not the plea of a British freedom fighter. Ultimately, it’s always about the wider picture, and the context.

Simon Forder, The Castle Guy, is a historical consultant and author. Find out more about his work here. He is the author of The Romans in Scotland and the Battle of Mons Graupius, published by Amberley.