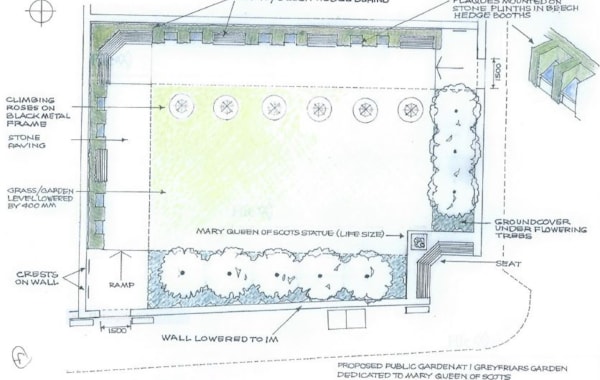 Plan for the proposed garden

The garden, on the corner of Greyfriars Garden and St Mary’s Place, which has lain derelict for over 20 years and has attracted antisocial use, has been a 'major cause of annoyance' for residents and visitors.

Now, a recently-formed community-based group has learned that its application to register an interest in buying the garden has been approved by the Scottish Government. Using the Community Right to Buy legislation, now extended to urban areas, a group of local residents, supported by twelve major voluntary organisations in the town, submitted their two-stage application in December and January.

The Preservation Trust and the Confederation of Residents’ Associations provided logistical support in obtaining the necessary evidence of community support for the proposal.

History of the site

The garden ground, in the centre of the ancient Royal Burgh, is on the site of the medieval Greyfriars monastery and this piece of land was granted to the community of St Andrews by Mary Queen of Scots on 17 April 1567, a few months before her forced abdication. Since then, the site of the monastery has passed through many hands, and the proposals for the garden will reflect its medieval history and return it once more to the community, provide resource for townspeople and an additional site of interest for visitors to the town.

A community group named Poets’ Neuk plans to turn this prominent area into a public garden, celebrating the history of the site and its recorded connection with Mary Queen of Scots. Poetry by and about the Queen will be featured in the garden, and, in time, a life-sized statue of Mary will be a centrepiece.

Graham Wynd, chair of the community group, who lives close to the garden, welcomed the Government’s decision, and expressed his thanks for the enthusiastic community support, which has made the project possible. He said: Putting this prominent site to beneficial use will be of enormous value to townspeople and visitors alike - who treasure the town’s historic environment.'

Bill Borthwick, for the St Andrews Preservation Trust, noted that since 2010 the Trust had been very concerned about the badly neglected garden and the impact it was having on the town’s historic centre. He said: 'Transforming this space into a new poetry garden will provide the town with a wonderful public amenity and educational facility.

'It will involve a great deal of work, both now and in the future. We don’t underestimate the challenges but I am confident that the Trust will wish to lend its full support to bring the project to fruition.'

David Middleton, secretary to the community group, added: 'Planning permission has already been given for the garden design, and this will enable the project to move forward quickly, as soon as confirmation that the formal procedures for the purchase of the land have been completed.'

For more on the history and heritage of St Andrews visit the St Andrews Preservation Trust website.