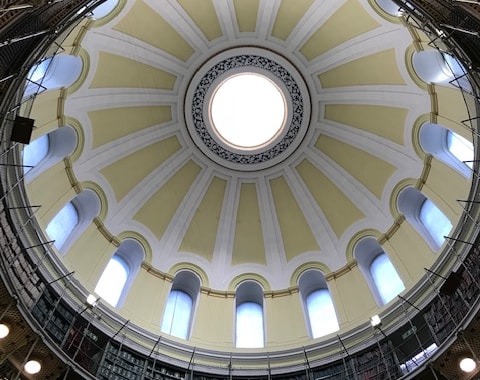 A report on The Scotsman website here has drawn attention to the damage caused by heavy rainfall leaking in through a dome at National Records of Scotland, which holds documents dating from the 12th century through to the present day.

History Scotland's sister magazine Family Tree contacted National Records of Scotland for an update and was given the following information:

"Following exceptionally heavy rainfall last week, water ingress was detected in New Register House. There was no significant damage to records or building fabric and a successful repair was promptly carried out.
"A small number of marriage, death, and still birth records from the late 19th century to the mid 20th century were slightly affected by water.
"National Records of Scotland hold over 70,000 metres of records in our collection, and 15-20 metres of records were affected.
"There was no loss of information as we have robust procedures in place for dealing with incidents which have the potential to affect our records and documents. These procedures, which include a team of volunteer staff being on stand-by to respond if necessary, were implemented.
"All records held in New Register House have been digitised and where open to public access, can be accessed online via our ScotlandsPeople website."
In a further update, Family Tree was told by NRS: 'I can now confirm that the water ingress occurred on the top floor of the dome at the North West section of the building.'
(image copyright Ron Almog)