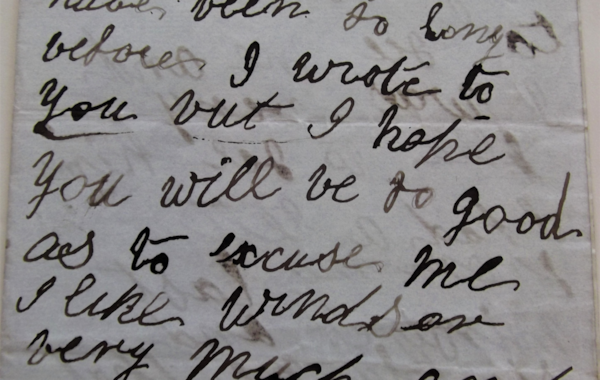 An archive of letters, seen for the first time, lifts the lid on schools which provided education to the poorest children in Victorian times. Historians have explored more than 200 letters former scholars sent to a teacher of a ragged school – a charitable organisation which offered free education to destitute children in 19th-century Britain.

Ragged schools were in the poorest areas of cities, and had volunteer teaching staff. The conditions in the schools attracted widespread attention, most notably from Charles Dickens whose visit to a school in 1843 inspired A Christmas Carol.

The letters record the experiences of 57 boys who had emigrated from age 14 to Australia, Canada or New Zealand with the help of the London Ragged School Union’s Emigration Fund. Researchers at the University of Edinburgh say the letters offer a new perspective on working-class education, by revealing the pupils’ reading and writing skills.

The letters – stored in the Surrey History Centre in Woking – are part of the family archive of Martin Ware, a barrister and superintendent of the boys' school at Compton Place Ragged School. Mr Ware took some school journals, letters and papers with him when he left the school.

Researchers have looked at the handwriting, misspellings and clarifications of each writer to build a picture of their sense of pride or shame towards literacy.

The fate of ragged school pupils

The testimonies from the scholars – who went on to enter a wide range of trades, including bakers, farmhands, plasters and joiners – include their opinions of the teacher and their thoughts about emigrating.

In their own words, they highlighted their anxiety and homesickness, such as one scholar who said: “But we like to hear from old and Tried friends at home What Magic there is in that small world.”

They also include well-used phrases from the Victorian era, such as “I write these few lines to you hoping to find you well as it leaves me at present.”

Researchers say that until now insights on ragged schools focused on adult voices – the assessment of teachers and government inspectors of the schools, prior to Education Acts.

Lead researcher Laura Mair, of the University of Edinburgh’s School of Divinity, said: “The letters have provided a valuable insight into students’ experiences of a ragged school. The students’ side of the story add colour to a historic view of the schools which in some respects has been black and white.”

Read the report in full.