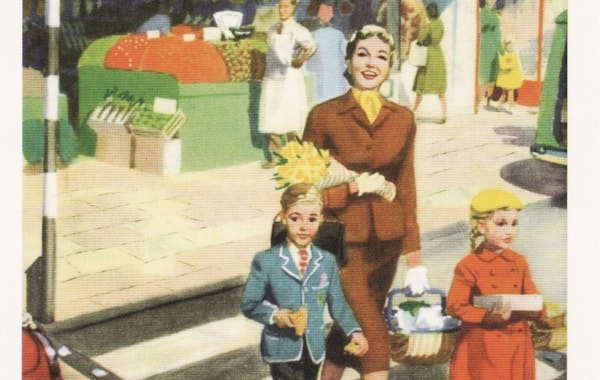 Shopping with Mother was one of the first Ladybird books I possessed, its 1950s illustrations etched on my memory still, as are snapshots of food shopping with my own mother in Ayr in the early 1960s. Butchers, bakers, fishmongers, grocers, green grocers and of course, the sweetie shop: food shopping then was anything but a one stop shop.

My strongest memory was of visiting Douglas and Woods Grocers’ Shop in Burns Statue Square.  Shelf lined walls were crammed with packets and tins, well out of reach of customers, whose presence was carefully controlled by wide wooden counters, groaning with mysterious devices. With shopping list in hand, my mother might request fresh eggs from the basket; a portion of cheese, cut with frightening accuracy by a piece of taut wire, resembling an execution; a portion of butter, artistically patted into shape by wooden paddles before being neatly wrapped, like the cheese, in greaseproof paper.

But that was not all.  Most memorably, stout and jovial Mr Woods would lift me up so that I could dip my hand into one of the biscuit containers, its glass lid raised to reveal the tantalising array of loose biscuits within. A couple of doors away was Miss Strachan’s Sweet Shop. Similar in appearance to Mr Wood’s shop, though much smaller and narrower, her shelves were filled with serried ranks of tall glass bottles topped with chunky stoppers and filled with a rainbow hue of confectionery. When at last I had
been pinned down by my mother to make a decision, dainty pink and white stripped paper bags were employed to carry the precious contents safely home.

Girdwood Baker’s Shop would be next. This shop has for me the most regular memories from my childhood, for it was here, when I was a little older, that annually my father and I would shop together – as far as I can remember the only time we’d do so. The occasion was my April birthday when, as a special treat, we would collect my birthday cake. Iced in piped perfection and displayed on its shiny silver base, it was then enveloped in a white box conjured up with the precision of origami.

My mother’s shopping expeditions routinely took in Nesbitt’s the Butcher on Alloway Street. These visits are dominated in my memory by the sawdust floor and vermillion stained white coats of the scary-looking men wielding intimidating weapons. There was also an unmistakable odour about the place which made me eager to move on. But if the smell of the butcher’s was not to my liking, it was nothing to that of Boyd’s Fishmongers, in the same vicinity.

Apparently, long before I was able to express my dislike of the fish shop verbally, my screams as a baby began only if she had parked my pram outside that establishment, while she shopped inside!