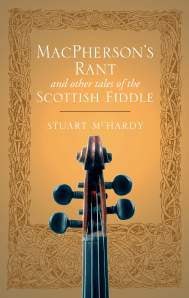 Outlaw James Macpherson was hanged at Banff on 16 November 1700 for cattle and sheep stealing. ...

Outlaw James Macpherson was hanged at Banff on 16 November 1700 after being convicted of stealing cattle and sheep. Macpherson had been arrested and captured several times for cattle rustling, but had previously managed to escape.

At the time of Macpherson's capture, it was a criminal offence to be an 'Egyptian' (or gypsy), an 'offence' of which he was accused, because his mother's family were travellers and he retained his traveller roots. Macpherson and three of his men were accused by Sheriff Nicholas Dunbar of 'Being ye mercats in yr ordinary manner of thieving and purse-cutting, or of the crimes of theft and masterful bangstree and oppression'.

A strange legend is attached to Macpherson's death which says that the vilage clock was moved forward by fifteen minutes before Macpherson was executed, in order to forestall the rider who was making his way to Banff with a reprieve. By the time he arrived, Mcpherson was already dead.