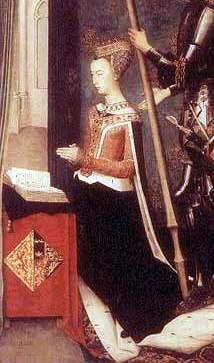 The islands of Orkney and Shetland came under Scottish rule on 20 February 1472. ...

The Orkney and Shetland islands came under Scottish control on 20 February 1472 after they had been used as security for the wedding dowry of Margaret of Denmark, the future wife of King James III of Scotland. The marriage was seen as a way of uniting Denmark and Scotland, following years of disagreements about taxation of the Hebrides Islands.

Margaret's father Christian of Denmark had agreed to a large dowry for his daughter's wedding and pledged the islands of Orkney and Shetland as security until the dowry was paid, as he lacked the funds to pay the dowry up front. Margaret and James III went on to have three children:

Margaret of Denmark died at Stirling at the age of thirty, in 1486 and is buried at Cambuskenneth Abbey.

James III: The Stewart dynasty in Scotland by Norman Macdougall