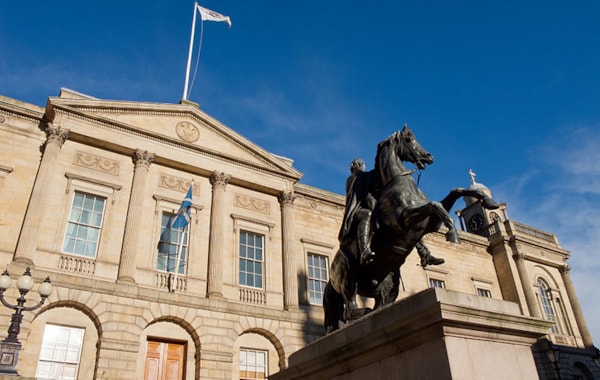 Genealogist Margaret Hubble describes the value of kirk session records in exploring the lives and times of our Scottish ancestors.

It is unbelievable what you can find in some Kirk Session minutes, most of which can be located at the National Records of Scotland in Edinburgh (pictured). This entry for 18 March 1827 gives an example of the rich details which can be found in such records:

“The Moderator stated that the family of Galloway had applied for some allowance, as he was staying with them after being released from the Madhouse where he had been confined at the expense of the Session.  The Session agree in the meantime to give him 1 shilling 6 pence weekly.” *

The second part of the document explains the types of fines given out for having illegitimate children (fornication or antenuptial fornication) and for committing adultery.  They had to pay out for their sins in those times!

“The Session also agree that in future, in cases of Fornication, a fine of 10 shillings 6 pence should be paid by the parties before being restored to their Christian privileges and that when the same parties are guilty a second time, the fine shall be doubled.  The Session also agreed that a fine of 21 shillings shall be paid in cases of adultery, before receiving absolution for the scandal of which they have been found guilty.”

We know that irregular marriages were carried out throughout Scotland.  Marriages in Scotland could be either “regular” or “irregular”.  Both were legal. Regular marriages were Established Church marriages, when the banns were read out several weeks beforehand.  Such marriage ceremonies did not have to take place in a church, however, but could also take place in a private home.

The irregular marriages consisted of the following scenarios:

You can often find references to these irregular marriages in Kirk Session Minutes, when the couple had to appear before the Session and be suitably rebuked, following which any children born to them could be baptised in the usual way.

An article from the Scotsman newspaper of 20 October 1818 described how seriously the matter was taken, when it reported that on 17th of that month an individual named John Forrester had been tried at the Circuit Court of Justiciary at Jedburgh for illegally and clandestinely solemnising marriages at Lamberton Toll Bar.  His resulting sentence saw him being banished from Scotland for life, but the court appearance did not seem to stop him, as he had “begun his old trade again”, carrying on the practice on the River Tweed in a boat, near Paxton, exactly between England and Scotland. On the Sunday before the article appeared he had married two couples!