Neolithic axe marks, archaeological roots to the Merlin legend, and artefacts pointing to a “nationally important” medieval monastery are among the most ground-breaking finds of the year.

Dig It!, a hub for Scottish archaeology coordinated by the Society of Antiquaries of Scotland, has compiled their annual list of the biggest discoveries from the year to raise awareness of the archaeological work that takes place across the country.

In the summer, members of the public helped uncover and record 33 u-shaped grooves—known as “polissoirs”—made by Neolithic polished stone axes.

Over 4,500 years ago, people treated the abrasive sandstone at the site close to Balfron near Stirling like a whetstone to smooth or sharpen the tools before using them functionally to chop trees or perhaps ceremonially, for example, as diplomatic gifts.

After Scotland's Rock Art Project volunteer Nick Parish and Stirling Council Archaeologist Dr Murray Cook FSAScot stripped the turf off the rock surface, photogrammetry was used to produce 3D images to record the details in context thanks to funding from Historic Environment Scotland and Forestry and Land Scotland. The site had previously been exposed but had never been recorded and understood to such an extent.

Only two other polissoir sites have been found in Scotland so far, so it is possible that people travelled miles to smooth or sharpen axes at these special locations.

2) Beaker potsherd rescued from the waves

In August, a rare sherd of 4,000-year-old pottery which may help reveal more about the Early Bronze Age in Shetland was discovered on Burra.

The artefact was found as members of the public surveyed a half-submerged prehistoric house at Whalsie’s Ayre to help record the effects of the climate crisis with Archaeology Shetland and University of Aberdeen PhD student Ellie Graham.

It has been confirmed by pottery specialist Dr Alison Sheridan FSAScot as belonging to the Beaker tradition - a kind of pottery originally introduced to Britain from the Continent around 2,500 BC, but which was not used in Shetland until around 2,200 BC.

Experts plan to analyse the residue on the sherd interior to date the artefact—and potentially identify what the vessel once contained—to add to our understanding of this period in Shetland’s history. 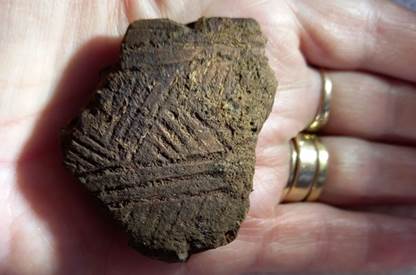 3) Archaeological roots to the Merlin legend

In August, volunteers led by GUARD Archaeology excavated Tinnis Castle near Drumelzier, the site of a 15th-century castle built within an earlier hillfort. Initiated by the Arthur Trail Association, the project is investigating the archaeological roots to the local Merlin legend set in the late sixth century which has been associated with this Borders village for over 600 years.

Their work revealed the base of a vitrified rampart which was burnt to the ground and may indeed predate the castle, as Scotland’s vitrified forts date from 800 BC to AD 1,000.

Radiocarbon dating of the rampart will confirm when Tinnis was occupied and whether this ties in with the period when the local story is set; and therefore if the origins of the world-famous Merlin legend plausibly originated at Drumelzier. 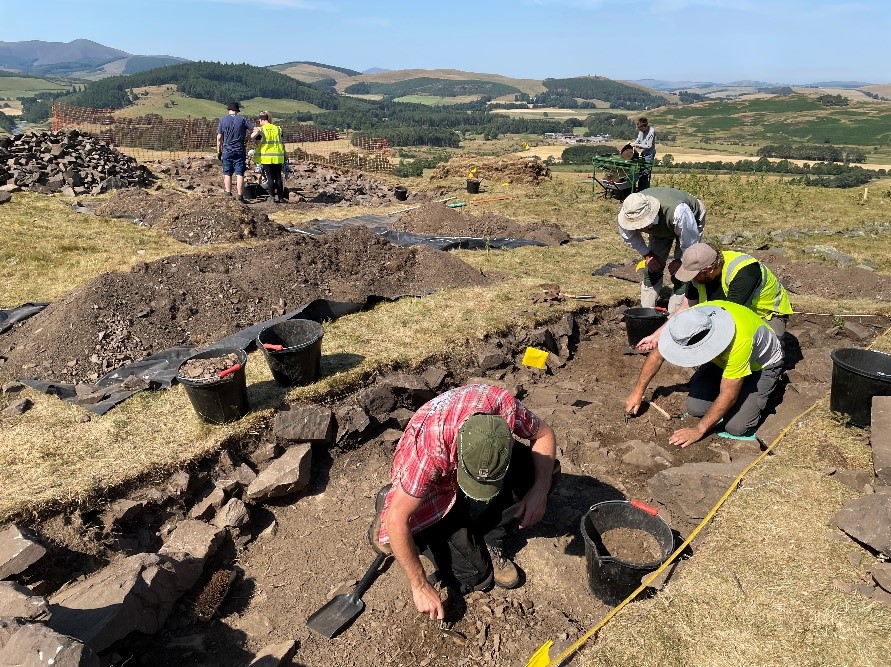 In May, volunteers led by Dr Clare Ellis of Argyll Archaeology uncovered evidence which has helped identify a “nationally important” site on Lismore in the Inner Hebrides.

Supported by a grant from the Society of Antiquaries of Scotland, the team found medieval artefacts such as crucibles, moulds and glass which indicate that specialist craftspeople were producing high-status objects for a prosperous monastic community and its wealthy patrons at the Clachan site. According to experts, these were on par with those produced within the monastery on Iona and the royal power centre of Dunadd in Kilmartin Glen.

These discoveries, along with the previous identification of a seventh/eighth-century cemetery, suggest that Clachan was home to the thriving early medieval monastery of St Moluag. It is said that St Moluag travelled from Ireland to Lismore in the sixth century and founded a monastery around the same time that St Columba (who is credited with spreading Christianity in Scotland) founded his community on Iona. 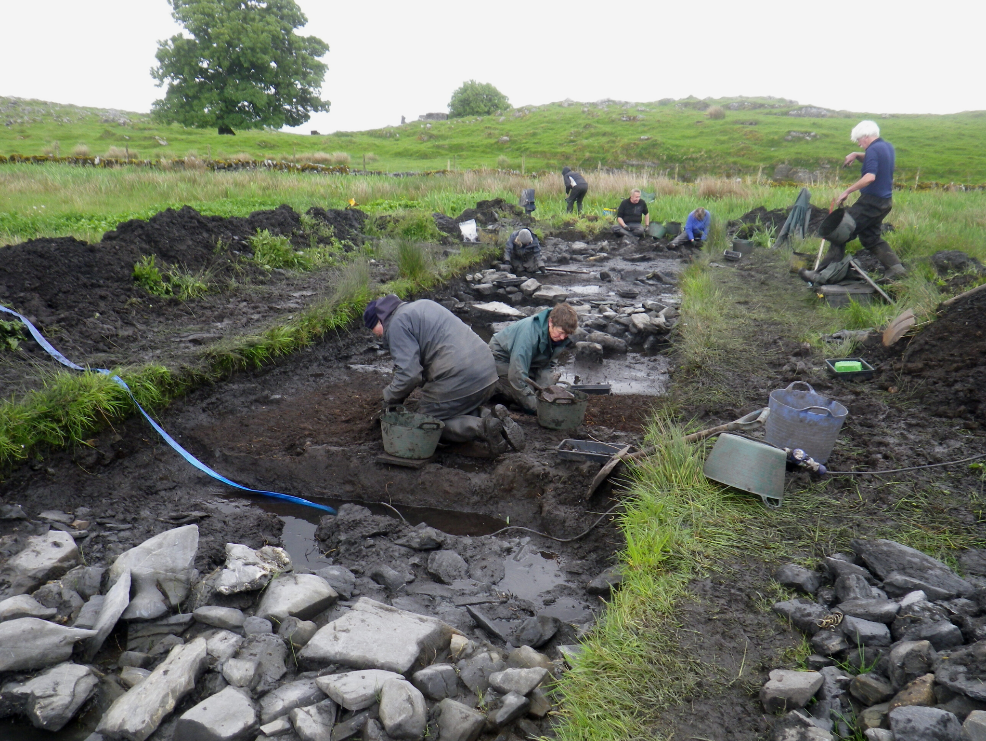 One year after uncovering 300-year-old rail timbers, the 1722 Waggonway Project unearthed another industrial-era structure connected to the site of Scotland’s first railway.

Volunteers and archaeologists discovered a stone structure believed to be a 'landsale coal wharf' near Cockenzie Harbour in East Lothian, which would have been used to unload coal from a waggon at the coal depot located at the northern end of the railway line.

The structure is believed to date to around 1830 and would have functioned similarly to the turntables and chutes employed at harbours. These inland versions of the wharf structures are rare, and this example is believed to be the earliest ever excavated in Scotland.

Intriguingly, the site lies on top of an earlier wooden structure, possibly the remnants of an 18th-century version of the same type of operation which could reveal additional information about these structures. The group will be conducting more extensive excavations with events and viewings for members of the public in 2023. 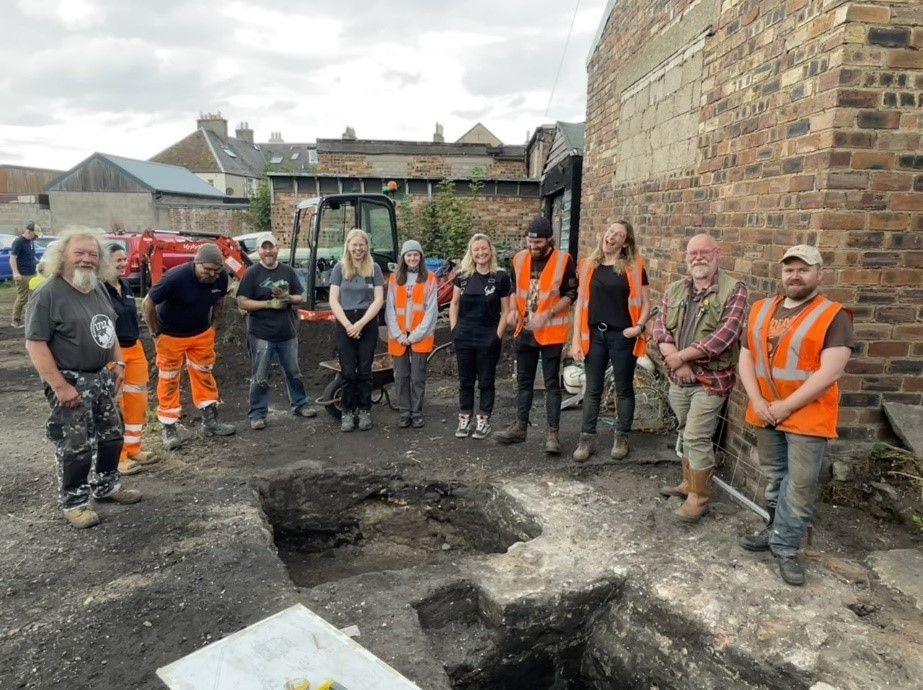 Other notable discoveries from 2022 include hundreds of fragments of Mesolithic stone tools in the Cairngorms by University College Dublin, two newly identified Neolithic crannogs in the Outer Hebrides by Southampton University’s Islands of Stone project, possible evidence of Neolithic farming at a 5,000-year-old cursus monument on the Isle of Arran by University of Glasgow Archaeology students, the UK’s “first stone steps” at the Ness of Brodgar in Orkney, and the first example of an early medieval Ogham stone found in Stirling by volunteers working with Dr Murray Cook FSAScot.

Several significant developer-led discoveries were also made, including an Iron Age metal-working site possibly destroyed by the Romans in Moray excavated by Archaeological Research Services. This is archaeology undertaken to offset the impact that development has on our historic environment.

Dr Jeff Sanders FSAScot, Project Manager at the Society of Antiquaries of Scotland’s Dig It! project, said: “Every year, archaeologists, volunteers and members of the public discover more of Scotland’s stories in labs, museums and on site through community digs, university-led fieldwork and excavation in advance of development. Their work during the Year of Stories 2022 has been rewarded with a range of discoveries from international connections to industrial-era structures that help us better understand the richness and challenges of past people’s lives, as well as topics that are still relevant to us today”.

Dig It! advertises archaeology events throughout the year, including fieldwork opportunities which are free and open to everyone with no experience required. The project is coordinated by the Society of Antiquaries of Scotland and primarily funded by Historic Environment Scotland.

Report and images courtesy of DigIt/Society of Antiquaries.