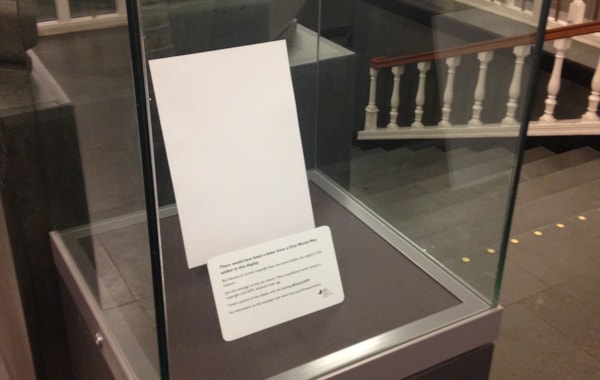 A number of leading museums and libraries, including the National Library of Scotland, have launched the Free our History campaign. ...

The campaign has been launched to coincide with the centenary of World War One, with campaign leaders stating: 'Display cases in the Imperial War Museum, National Library of Scotland and University of Leeds sit empty. They should contain letters from the First World War; from a young girl to her father serving as a soldier and from soldiers to their families back home. Because of current UK copyright laws the original letters cannot be displayed.'

WHAT DOES THE CAMPAIGN HOPE TO ACHIEVE?

At the moment the duration of copyright in certain unpublished works is to the end of the year 2039, regardless how old the work is. The Free Our History campaign wants the term of copyright protection in unpublished texts to be reduced to the author’s lifetime plus 70 years.

WHY IS THIS IMPORTANT?

As part of the World War One centenary many organisations want to make unpublished works such as diaries and letters accessible to the public. Because they are still under copyright protection they cannot do so without permission from the rights holder. Up to fifty percent of archival records are orphan works; the rights holder cannot be identified and/or traced.  The Imperial War Museum has 1.75 million documents that are orphaned.

HOW CAN I SUPPORT FREE OUR HISTORY?

On 31 October 2014, the campaign supporters announced that they had received a letter from Baroness Neville-Rolfe, the Minister for Intellectual Property, which stated that the government has 'launched a consultation on proposals to reduce the duration of copyright in certain unpublished works'.

In a response to this statement, Naomi Korn, Chair of the Libraries and Archives Copyright Alliance, said: 'Following the launch of the Free our History campaign, we welcome the Government's consultation into the problem of 2039 and support for addressing these issues. However, we are concerned that the six month timescale outlined in the Minister's letter does reduce the chance of these provisions seeing the light of day before the next General Election.

We need swift action to resolve this obstacle to accessing our history.

'The Libraries and Archives Copyright Alliance have a number of concerns that we will express through the consultation, including that if copyright works affected by the 2039 provisions are dealt with by the Orphan Works Licensing Scheme and/or the Directive And their associated due diligence requirements at the very least - this creates unnecessary costs and administration for cultural heritage organisations.

'If you care about our history and our collective cultural memory I urge you to sign the petition to make sure the Government prioritises this important issue.'