Wildlife conservationist and author Clifton Bain explores the history behind one of our most treasured natural habitats – Scotland’s ancient pinewoods.

The ancient pinewoods scattered across remote parts of the Scottish Highlands are survivors of the Caledonian forest that cloaked much of the land after the retreat of the last Ice Age. Each site has its own story to tell of natural forces and human interactions over the last 10,000 years. Understanding the clues to their history gives an exciting added dimension to a walk in these wonderful natural windows to the past.

Woodland names are a great starting point for any detective work.  The Gaelic word Guisachan meaning ‘place of the firs’ indicates an ancient pinewood, but more often than not now marks an empty space where trees once stood. 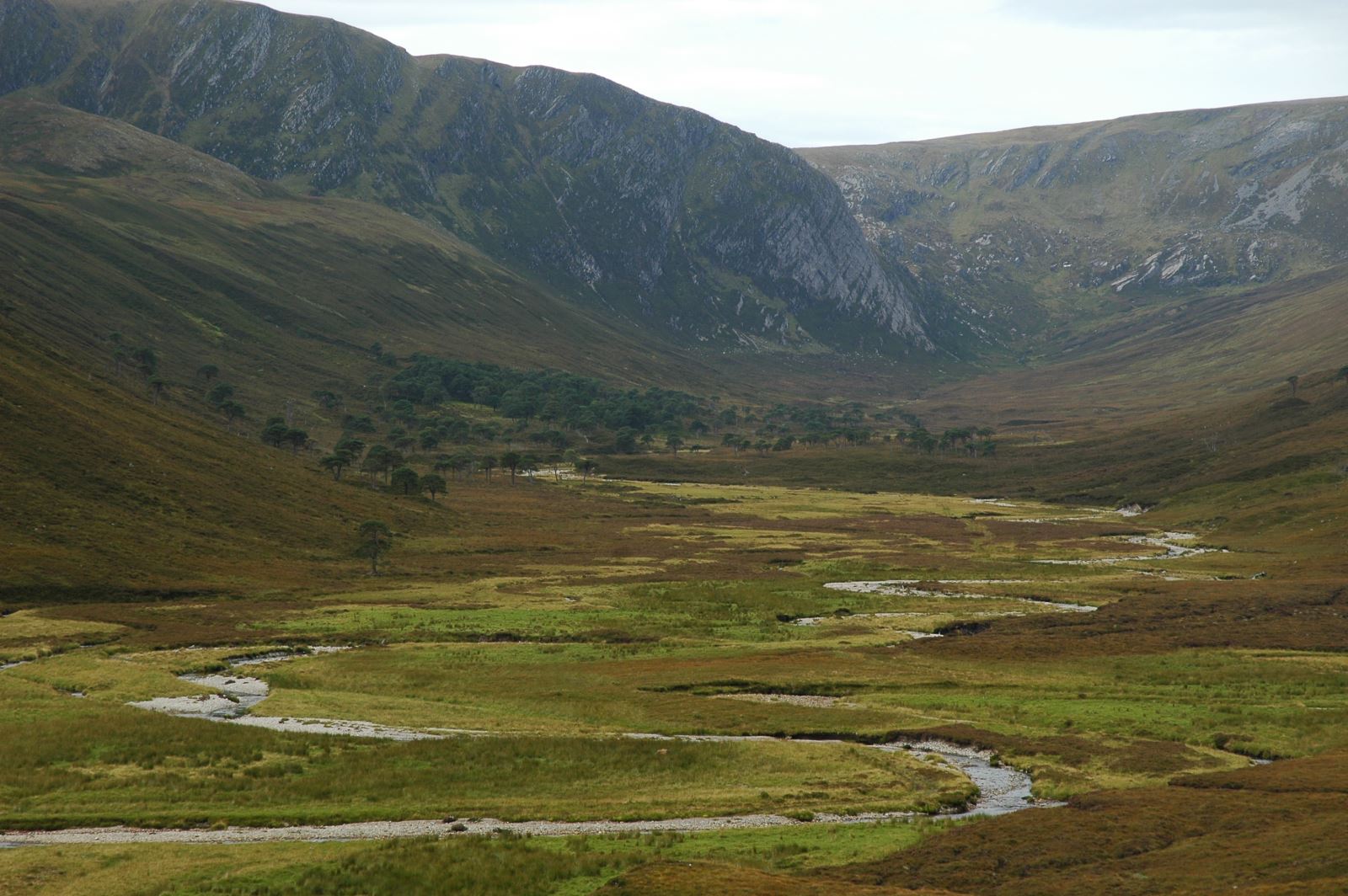 Alladale Wood in Sutherland (left) is Norse for ‘wolf valley’ from the time when Vikings occupied these remote glens. The last wolf died out in Scotland over 350 years ago. The adjacent wood at Amat (top) holds a haunting reminder of the 19th century Highland Clearances. Evictees sheltered in the tiny Croick Church and left sad messages scratched on the glass of the east window.

The land was given over to intensive sheep farming and heaving grazing pressure took its toll on the pine forests preventing young tree growth. Today’s remnants although stunning, are a fraction of the ‘Gryt firr woods’ of Strathcarron described by the 16th century Scottish Cartographer Timothy Pont.

A SHELTER FOR BONNIE PRINCE CHARLIE 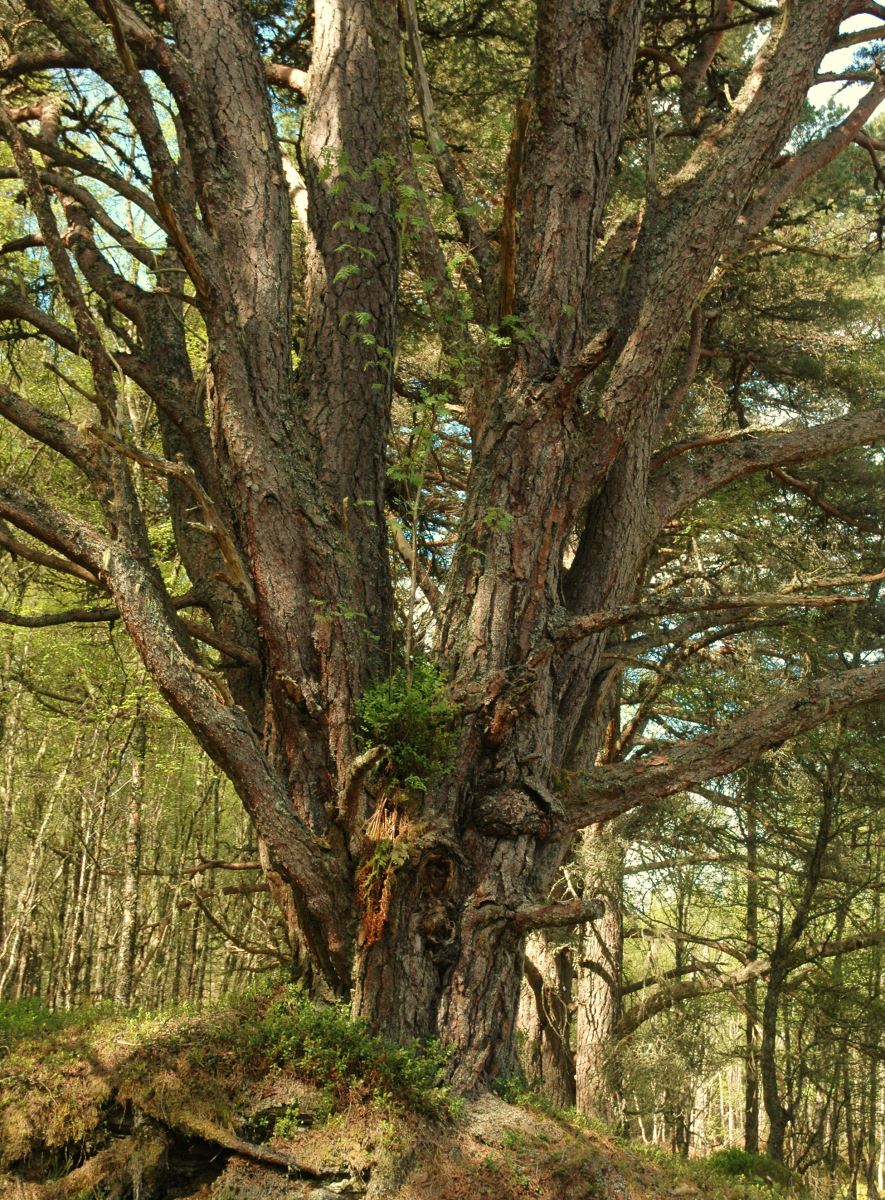 The pinewoods of the Great Glens contain trees that are over 250 years old and would have been growing at the time of Bonnie Prince Charlie. His escape through the wild mountain terrain included many hiding places among the pinewoods including a cave by the River Doe in Glen Moriston and another in Glen Garry at Meall an Tagraidh. The pinewoods at Loch Arkaig are even said to hold a hoard of Jacobite treasure.

After the defeat of the Jacobite army in 1746 many of the forfeited estates were exploited to the dismay of the former owners. Others were better managed with stone dykes to protect the trees from grazing livestock still visible in many places.

Later, the Napoleonic wars of the 19th century and the blockade on timber imports saw major felling of the woods. The Black Wood of Rannoch in Perthshire (right) has the scars of canals dug into the hillside in 1800 for floating the logs to the loch below.

At Abernethy Forest the surrounding moorland contains ‘dreaming pools’ reed fringed circular ponds among the heather which once provided headwater for floating timber down the streams to the local sawmills.

It is not just the woods that retain their sense of history but the routes to them as well. Ancient cattle drove roads along which thousands of animals were moved from the hills to the markets ‘trysts’ now form the main walking routes through the woods. At Rhidorroch Wood in Glen Achall the ground remains nutrient rich from the manure of herds rested here from the 16th to 19th centuries, on their way from the Western Isles to Ardgay in the east.

The great road-building era of the 18th century saw General Wade and Major Caulfield responsible for upgrading old drove roads. The route from Fort Augustus to Glen Moriston and on towards the isles was described by Samuel Johnson who remarked at the denuded forests and the soldiers constructing the bridges and culverts still standing today. 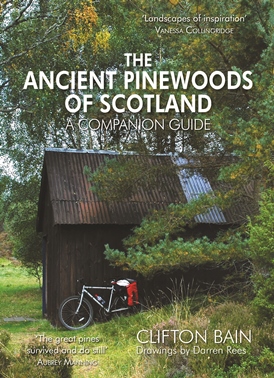 Clifton Bain is the author of The Ancient Pinewoods of Scotland: a companion guide, published by Sandstone Press. The book is intended for woodland walkers and armchair planners to accompany them in their explorations.  It provides descriptions of 38 sites with maps and travel notes.