Elisabeth Gifford, author of the new historical novel The Lost Lights of St Kilda, talks to us about her experiences of the island and family connections to the Highland 51st Division whose World War II service is a key part of the plot.

This historical novel is a love story that crosses oceans and decades, portraying two lovers, a desolate island and the power of hope in the face of darkness.

What can you tell us about your first memories of discovering that St Kilda existed and then finding out more about the islands?

My actual Irish family history is lost, as all records were blown up in the Easter rising and as poor famine immigrants, nothing written survives from my great grandparents who came over from Dublin. I married a Scot and over twenty years we spent a lot of time with family across Scotland, and many holidays in the Hebrides where the Gaelic culture and language are still vibrant - but on the cusp of change.

I thought it would be good to try and record something of the heritage of the older people I was meeting before it was lost. Then I heard about the most remote Hebridean island, St Kilda, where the isolated and close-knit community had retained the traditional Hebridean lifestyle longer than most, but with some unique traditions. They gathered seabirds from the highest cliffs in Europe and lived a simple, communal existence. They rowed out to towering rock stacs in the Atlantic swell to tend their ancient breed of Soay sheep on tiny patches of turf a thousand feet up in the air. 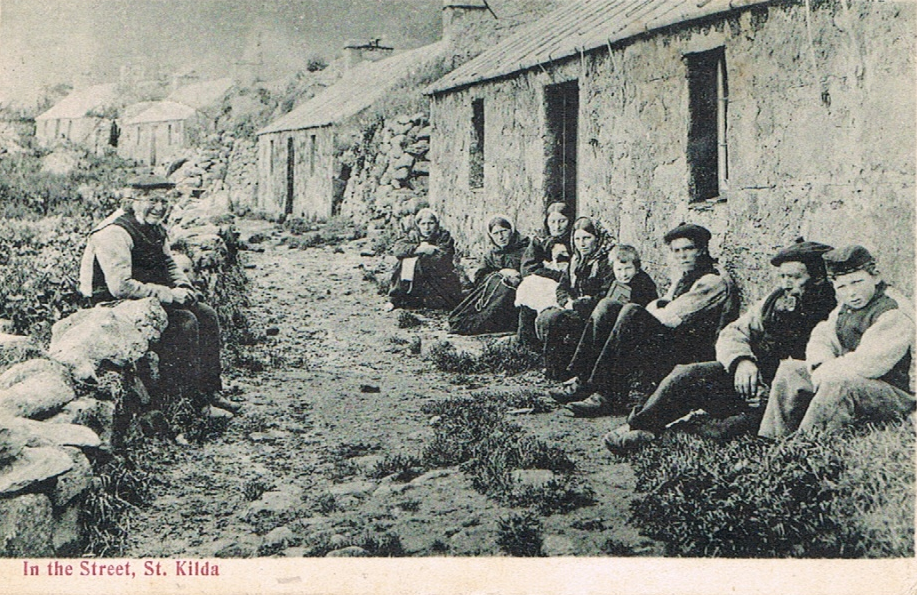 Much of what they wove in tweed or grew on the crofts went for rent to the island owner, the laird of Dunvegan, who was also their link to the mainland a hundred miles away. But the pressures of the modern world saw the young people leaving the island.

Sadly, in 1930, the community almost starved when they were cut off by terrible storms and the island was abandoned. I began to read everything I could find about the group of islands that make up St Kilda but it would be another ten years before I felt I had enough knowledge to begin to attempt to reconstruct that lost community in novel form.

Could you tell us more about your family's connections to the wartime theme that runs through the story?

A few years back, I was writing a book inspired by my husband’s grandparents, Louisa and Bill Gentry, who lived in Madrid during World War 2 and were part of a ring of people around the British Embassy who helped servicemen and Jewish people escape from occupied France. Their flat was used as safe house.

Bill mentioned that they did something along the lines of the Rev. Donald Caskie, the Tartan Pimpernel, who ran a safe house in Marseilles until captured by the Gestapo. I began researching and realised that many of these escaping servicemen came from the 10,000 Scots of the Highland 51st Division who were not evacuated in 21940 at Dunkirk with the rest of the troops but captured at St Valery while fighting a rear guard action.

I wanted to trace the journey many Highlanders made, from Scotland to fight in France, defeat at St Valery, then escaping down through Spain and home to Scotland again. I later found out that one of the boys on St Kilda had been a POW in World War Two. 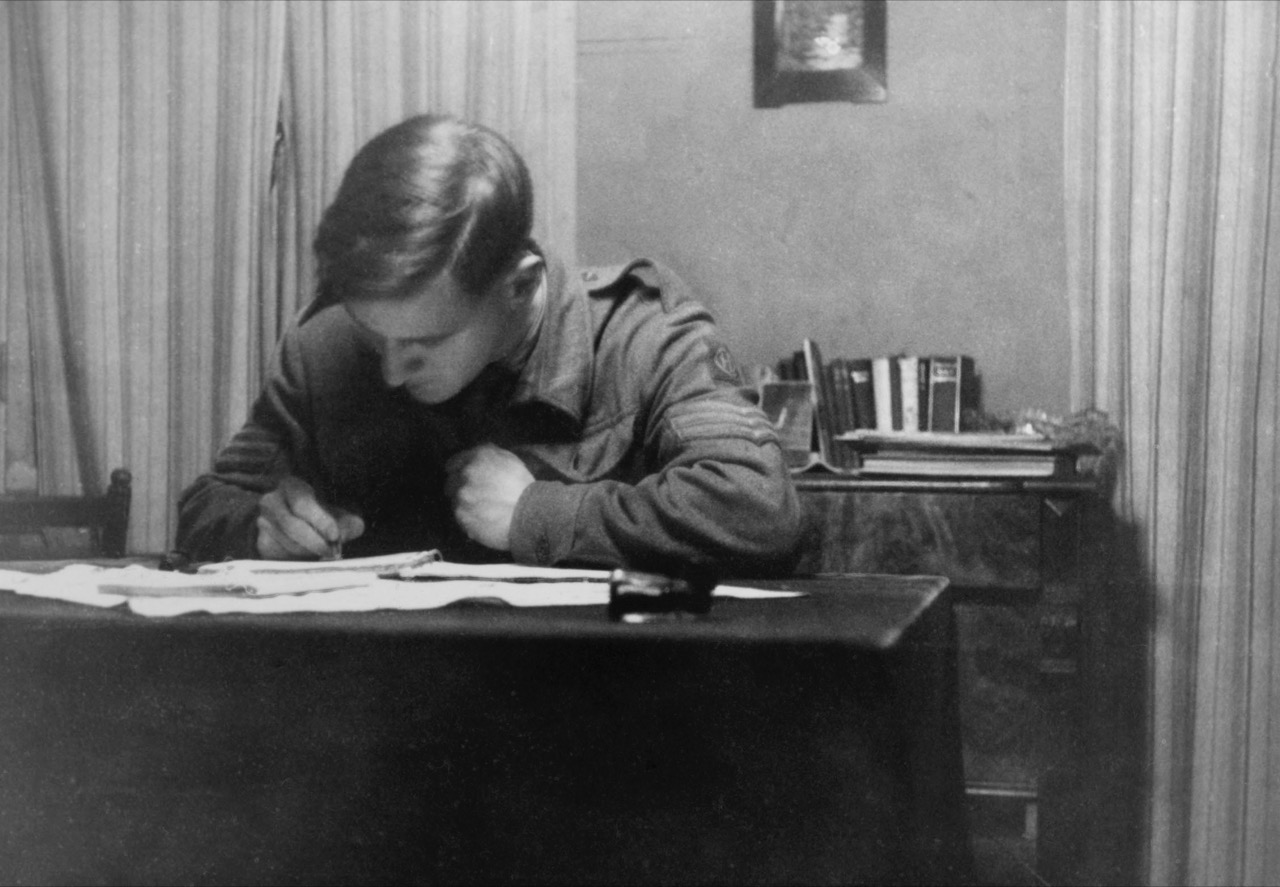 Douglas Gifford to whom the book is dedicated. He went over with the BEF at the Normandy landings aged 18 with intelligence, here writing a letter to his fiancée in his billet (D Gifford)

Bill’s son, my father-in-law, was part of the subsequent Normandy invasion and at the Bremerhaven victory parade when the reformed 51st Highland Division marched with massed pipes. 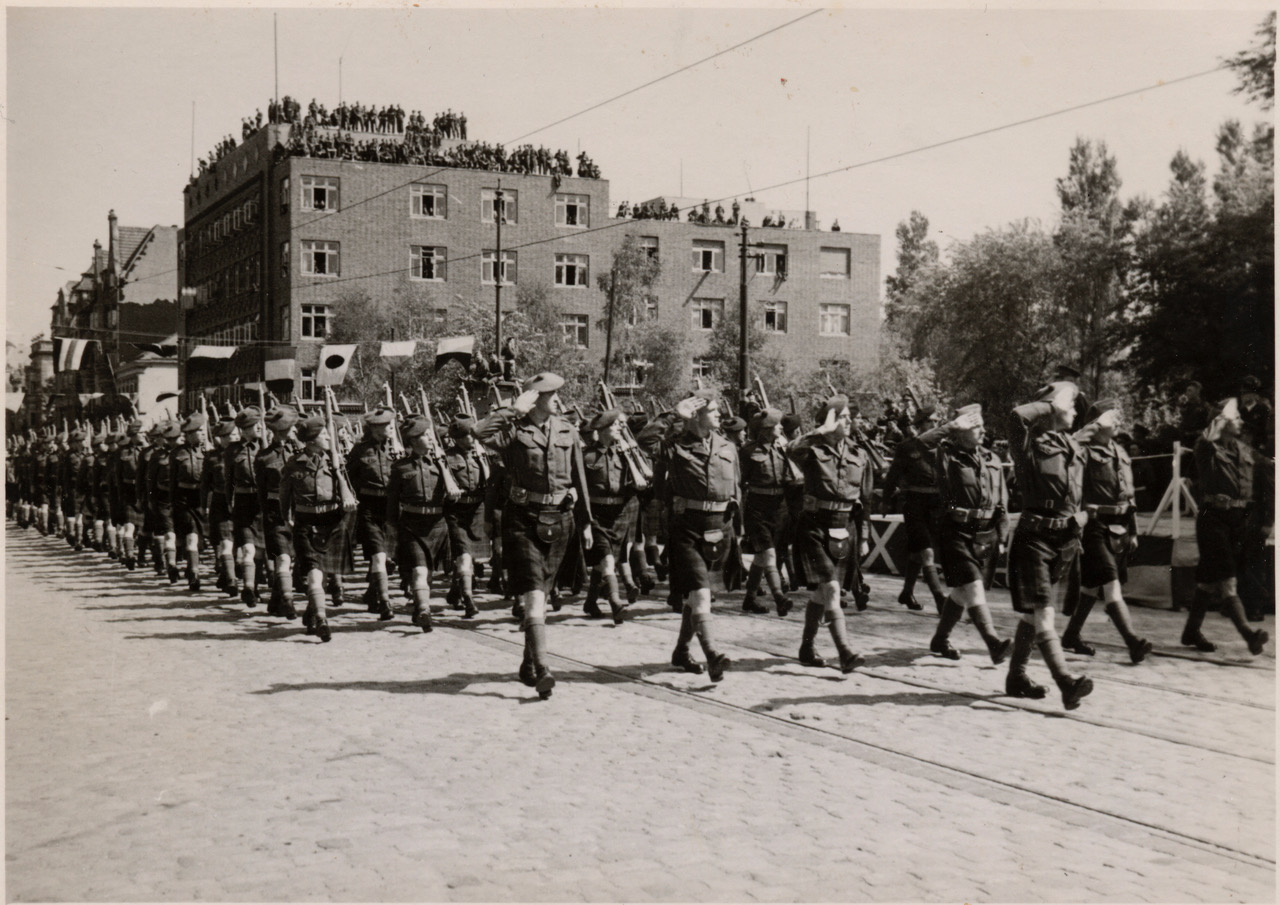 Douglas's photo of the Bremerhaven victory march past

I’d long been curious about the significance of these ranks of Scottish soldiers in the photographs that he brought back. I realise now, with so many of the 51st still in POW camps, what that parade of the 51st must have meant to the troops. 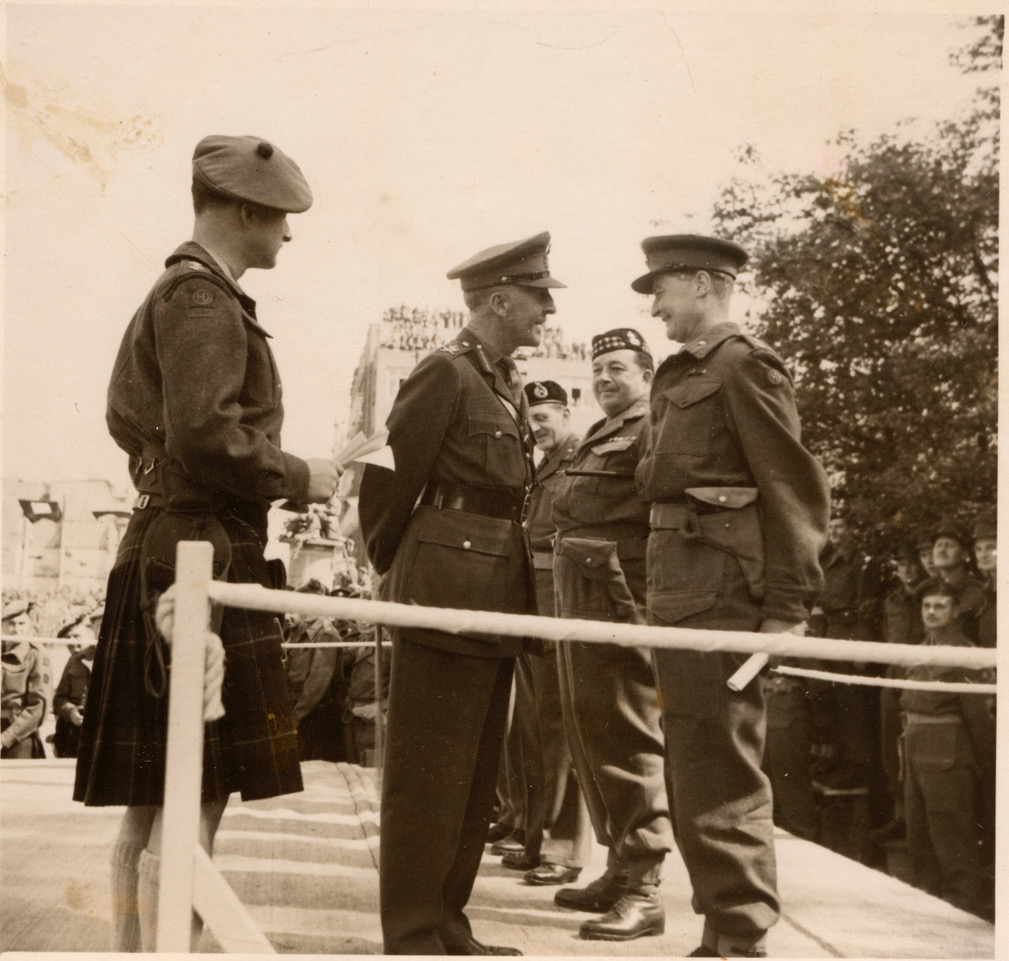 The reformed 51st in parade kilts

The themes of weather and nature on the St Kilda islands are essential to the plot and the characters - how did you research these unique elements of the story? 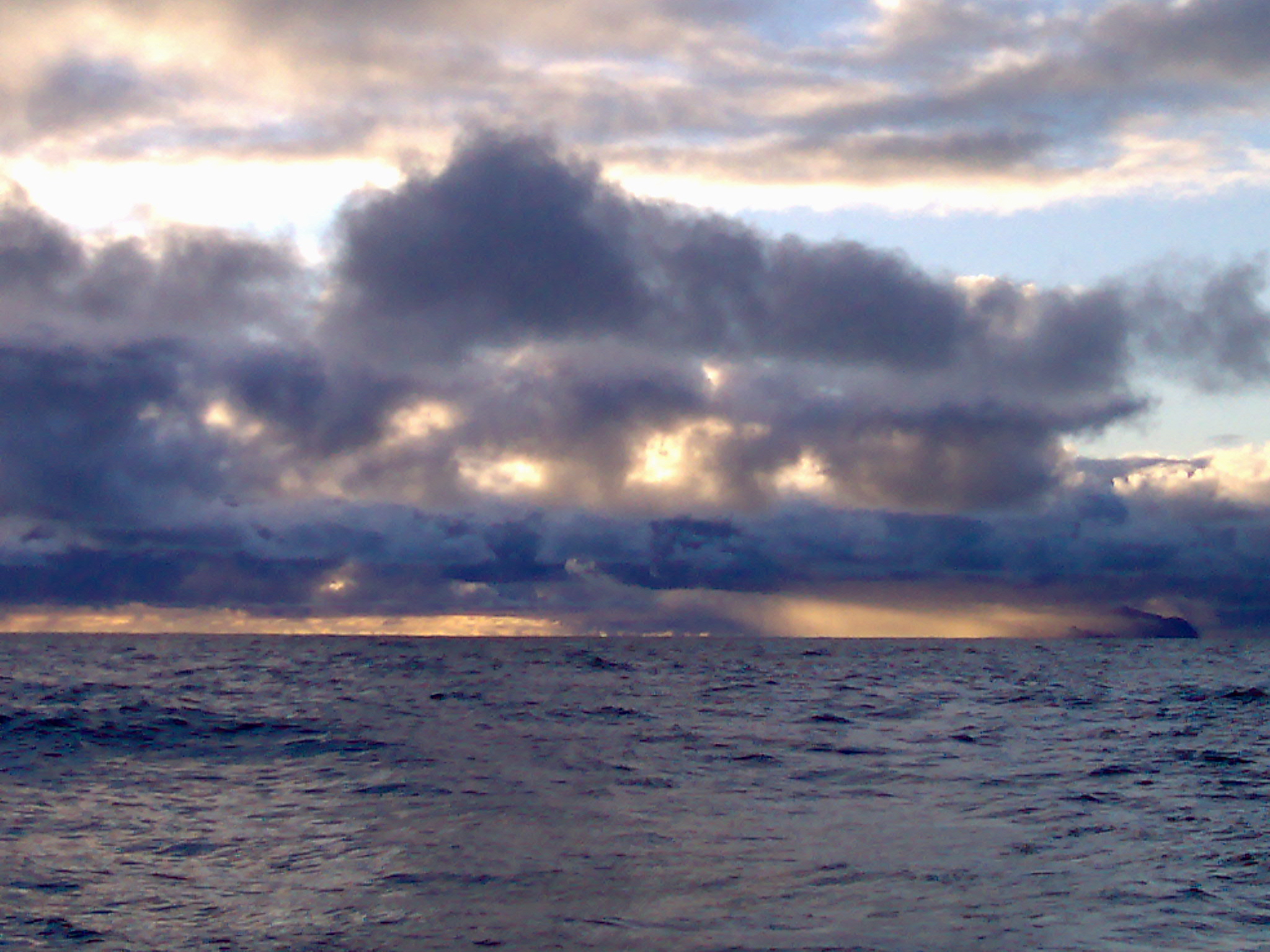 We were lucky enough to go out to St Kilda with Sea Harris, me furiously writing down every puff of wind or change in the weather. I was looking for differences compared to the weather and nature in the rest of the islands that I’d come to know so well nearby, Harris, Lewis and the Uists.

St Kilda is the most remote part of the Outer Hebrides, another 50 miles out in the mighty Atlantic swell. You can’t really describe that remarkable chain of islands unless you have been blown away by the sheer beauty of the colours of the sky, the sea and the unspoilt grasslands - and blown flat by the incredible power of a Hebridean winter wind.

I was fortunate to have had many stays on the islands to experience the qualities of the landscape and weather, in particular the remote peninsula of Huishinsish looking out towards St Kilda which has a similar beauty.

Do you think that your lead character Chrissie would be the same person had she lived anywhere else than St Kilda?

She could possibly have lived on another Hebridean island, or perhaps in a remote part of the Highlands, but not elsewhere. The St Kildans were a sort of sub set of the general Hebridean culture of the nineteenth century and beginning of the twentieth, but with specific additional challenges of isolation and geography. They harvested birds from the highest cliffs in Europe and used old technology longer than elsewhere else, such as the hand quern, stone oil lamps in the byre, and traditional hand made dress. In their isolation, they were reliant on the island owner, the laird of Dunvegan, to act as their link with the world, and subject to philanthropic intervention of outsiders such as the row of model cottages Lord Acland donated mid nineteenth century – which were less warm and cosy that old thick walled black houses of the Hebrides that continued elsewhere for many years.

The St Kildans, like many rural communities, felt the pull of modern towns, but those emigrants felt the shock of mainland life more deeply, having seen no shops or trees or even bicycles on the island. St Kildans also shared a particular Hebridean spirituality, a deep faith inspired perhaps by a constant exposure to the numinous elements of nature’s beauty and power and solitude, a spirituality braided with the early Catholicism of the first monk missionaries, and also with Calvinsim and the later sweeping revivals in Harris and Lewis.

You can hear the same Gaelic lining out psalm singing that you would have heard on St Kilda at the time of the evacuation, still sung with moving fervour in parts of the Hebrides. There’s something about that mix of simple lifestyle, a caring community tied to the precarious elements of nature life and a deep spirituality that I think you can see in other cultures, and that is often there in modern Hebridean attitudes, but at the end of the day, St Kilda’s community was quite unique and something was lost with the evacuation of the island.

Are any of the characters based on people you've known?

Some of the characters in the book are based closely on the actual people who lived on St Kilda, but the novel characters are fictionalised. There was not enough material to do accurate biographical portraits. The fictional students staying on the island are loosely based on actual students who stayed there in 1927. After so much research, I realised I could match the names with faces for all the last families in the 16 cottages, which had never been done before. I’m giving that part of the research to the National Trust for Scotland for them to make a booklet for visitors to the abandoned village. I think it will show who the characters are based upon rather clearly.

How did the different time settings work in terms of you writing the book - did you work on these separately or in the order we read them in the book?

I began with an image of a man in a dark WW2 POW prison cell who holds on to hope through his memory of St Kilda. The St Kildan story is told through his eyes and also Chrissie’s. I worked on each story line separately then reviewed the interweaving strands, sometimes having to make many changes. I like the idea that history, including our own histories, constantly changes our perceptions of the present. Writing a dual time line story offers the fun of a detective story, and some of the philosophy of how we are affected in present time by the revelations from the past. 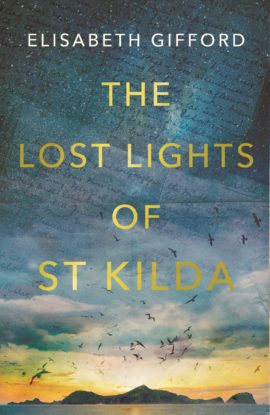 1927: When Fred Lawson takes a summer job on St Kilda, little does he realise that he has joined the last community to ever live on that beautiful, isolated island. Only three years later, St Kilda will be evacuated, the islanders near-dead from starvation. But for Fred, that summer – and the island woman, Chrissie, whom he falls in love with – becomes the very thing that sustains him in the years ahead.

1940: Fred has been captured behind enemy lines in France and finds himself in a prisoner-of-war camp. Beaten and exhausted, his thoughts return to the island of his youth and the woman he loved and lost. When Fred makes his daring escape, prompting a desperate journey across occupied territory, he is sustained by one thought only: finding his way back to Chrissie.

The Lost Lights of St Kilda is a sweeping love story that will cross oceans and decades. It is a moving and deeply vivid portrait of two lovers, a desolate island, and the extraordinary power of hope in the face of darkness.