The Mary Queen of Scots memorial portrait at Blairs Castle

Dr Alison Burke, curator at Blairs Museum, shares the history of a painting which depicts the execution of Mary Queen of Scots, and has a long and intriguing history.

Dr Alison Burke, curator at Blairs Museum, shares the history of a painting which depicts the execution of Mary Queen of Scots, and has a long and intriguing history.

“In my end is my beginning” were the words Mary Queen of Scots embroidered on her final day before she ascended the scaffold at Fotheringay Castle.  For Mary, those words were an expression of faith in eternal life.

430 years later these words are have become invested with the wisdom of foresight: her death and the manner of her death, her life, her choices, her image have fascinated and intrigued through the centuries, yet she becomes more mysterious as she is reinvented through the prism of successive centuries.

For a queen who has inspired artists, scholars, playwrights, composers and poets, it is surprising to learn that there are very view historical images of her, and what is perhaps more surprising is that three of those images are tucked away in the Blairs Museum, which nestles as a hidden gem in the beautiful landscape of South Deeside in Aberdeenshire.

Chief amongst the Blairs collection is the Mary Queen of Scots Memorial Portrait, a painting which has had an equally colourful and dangerous history. The painting was commissioned by Elizabeth Curle (pictured on the right of the painting) who was lady in waiting during the last eight years of Mary’s life, who accompanied Mary to the scaffold and was the last person to embrace her. On her death Mary divided up her property and gave to Elizabeth a miniature of her, which is also in Blairs collection and which bears a remarkable resemblance to the Memorial Portrait. After the execution, Elizabeth left for Antwerp, where it is believed the painting was made. 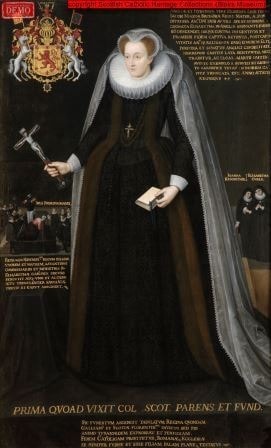 Ownership of the Mary Queen of Scots Memorial portrait

On her death in 1620, Elizabeth bequeathed the painting and the miniature to the Scots Collage in Douai where her nephew Hippolytus Curle S.J was a priest. There the painting stayed until the French Revolution forced the students and staff to flee when the building was sacked and the belongings seized. However, in such reverence was the painting held, that it was saved by John Farquharson Rector of the College. He took the painting to a friend who lived near to the College where it was cut from its frame and hidden up a disused chimney.

After the peace of 1815, the Scottish Bishops claimed compensation for Douai and in 1831 the French Government granted permission for the painting to be transferred to the College at Blairs, the only remaining college possessed by the Bishops in Scotland. This was in line with Elizabeth Curle’s will which stipulated that if the funds of Douai College were ever to be transferred, the miniature and painting should be transferred too as a memorial to her benefactions to Douai.

Mary Queen of Scots as a martyr

The Memorial painting presents Mary as a martyr. In the painting, she holds her crucifix and prayer book, her rosary is at her waist and the vignette of her execution depicts her in the red of martyrdom. This is not a Queen executed for treason, this is a Queen being executed for her faith and living on as a symbol of martyrdom.  The miniature painting takes this motif a stage further to present Mary Queen of Scots as in the company of saints.

At some point in the 17th century the miniature was reset as a reliquary and Mary’s image was placed amongst the relics of saints and crowned by ‘IHS’, on the converse of the miniature around the symbol of Our Lady – ‘Maria Regina Angelorum’ are more saintly relics. Therefore, within a matter of only a few years, Mary has become saintly, she has transcended the accusations levelled during her lifetime to be presented as martyr in the company of saints.

History will debate Mary for centuries to come, but to those who were with her at the end of her life, who loved and embraced her, she was a martyr whose ‘crime’ was her faith and they celebrated this in their memorialising of her, as such, her end was most definitely her beginning.

Blairs Museum is open to the public on weekends and Bank Holidays from Easter to October from 2pm to 5pm (last entry 4.30pm). For out of hours access please contact the curator by e-mail.

Up to date information about the museum is available from its Facebook page.