Alastair Mitchell explores the history of The Moine (Gaelic A' Mhoine), an extensive area of peatland, part of the Flow Country, that lies between Loch Eriboll and the Kyle of Tongue.

To us in the 21st century, The Moine is a unique, unspoilt region supporting a spectrum of rare plant, animal and bird life. To the inhabitants of the area in the 18th and 19th centuries, it was a formidable area of bog that presented huge problems when travelling from Durness to Tongue.

It is marked on Bryce's Map of the North Coast as "The Moan, a great morass", the Moan indeed a suitable name for it. Bishop Pococke, travelling in 1760, called it "a morassy country, impassable except to their little bog horses" and had to be escorted over by a Mr Forbes. John Knox, in 1786, observed that it was "partly a deep moss floating on water. It has no traces of a path, is much cut up, and though no more than eight miles across in a direct line, whoever passes that way in October, must walk at least twenty miles of a most fatiguing journey." Knox had two guides to see him over to Tongue, but he was so exhausted that he went to bed early, and was very nearly suffocated by the peat fire that was smouldering in the grate.

Perhaps the person who struggled most was the Reverend MacDonald. As Minister of Durness, he had to make regular trips over the Flow to preach at Tongue. He wrote in his diary "On the Monday, I was obliged to pass over the Moine, a tedious, fatiguing moss of five miles...in worse weather than I had in December", and later, in 1755 "in the form of a boisterous wind I came over the Moine and preached this day at the Meeting House here, in much weakness of bodye [and] mind, occasioned partly by the toil and weariness of the journey."

The road over the Moine was not built until 1830, the work organised and paid for by the Duke of Sutherland. Anderson's Guide to the Highlands notes that "the passage of the Moin, which formerly was the laborious achievement of an entire day, may now be accomplished in an hour's time with ease and comfort. The expense attending the construction of this piece of road must have been very great, from the mossy nature of the ground", and it then proceeds to describe the method of construction, which involved first bundles of coppice wood, then turf, and finally gravel. The Duke also built Moine House "for the refuge of the traveller", which now stands a ruin on the skyline. 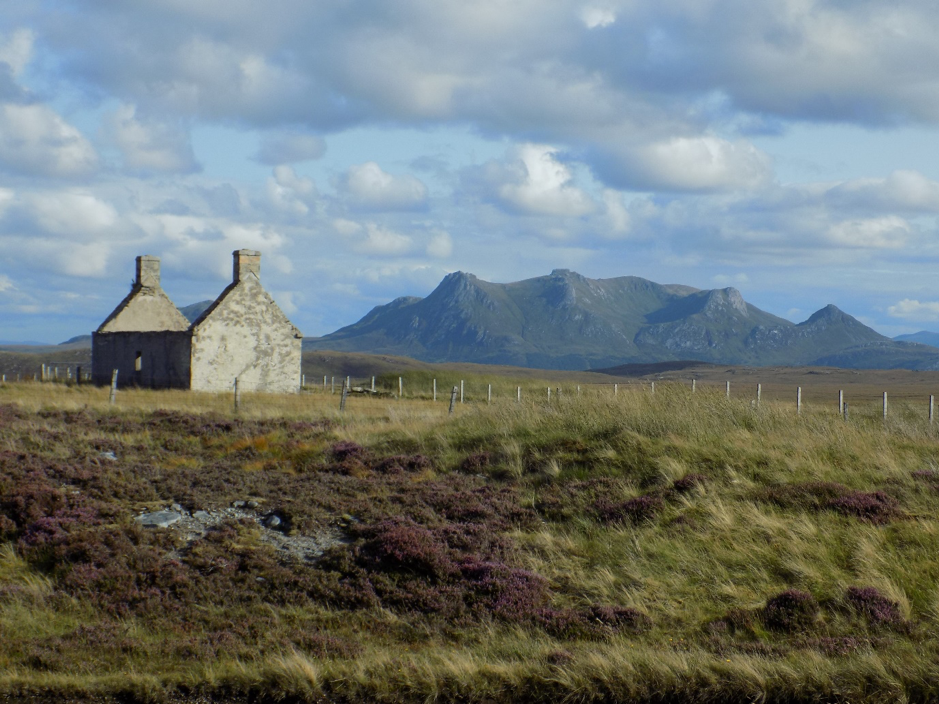 Moine House, with Ben Loyal in the distance

The only 17th-century cartography to show the Moine are by Blaeu and Jansson, on their detailed maps of the North of Scotland, where it is referred to as the "West Moan.” 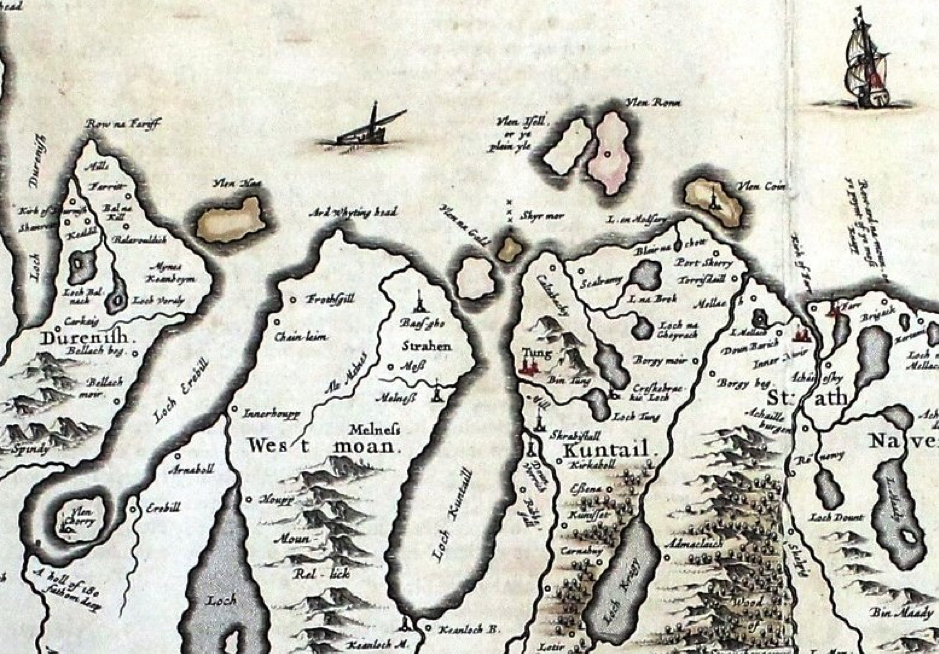 Detail from Blaeu’s map of Strathnaver, published in 1654. West Moan is shown between Loch Erebill(sic) and Loch Kuntaill (the Kyle of Tongue).

After 1750, cartographers like Dorret, the Bowens and Kitchin began to include the region on their maps. I suspect that Bryce had told them of the difficulties there which he had encountered whilst making his survey. 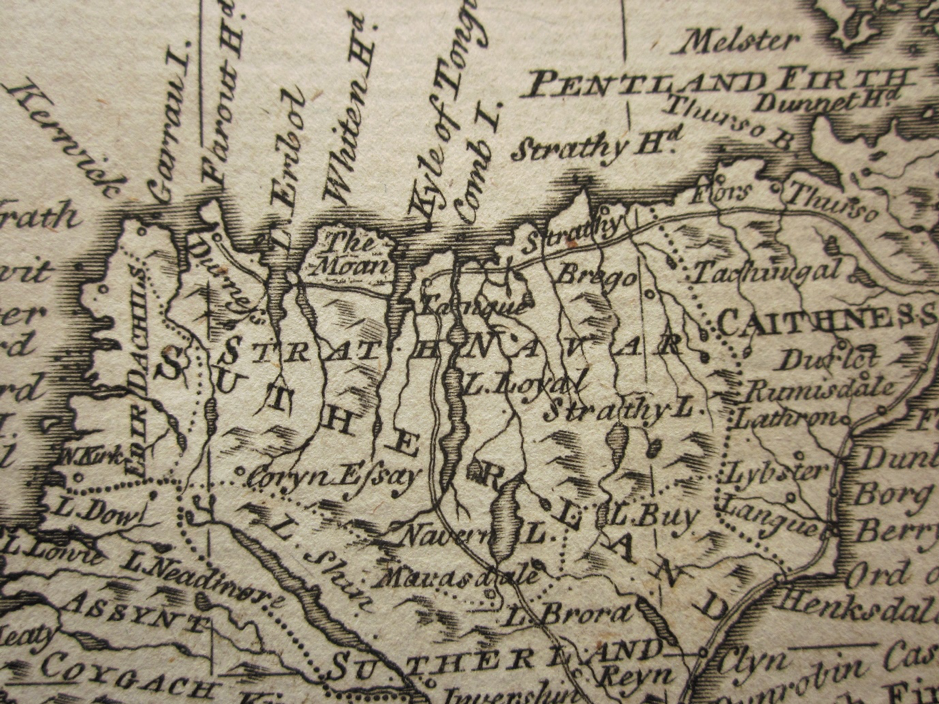 “The Moan” is given particular prominence on this map of Scotland by Thomas Bowen, published c.1770

As news of the area spread via accounts like those of Pococke and Knox, so other mapmakers began to include the Moine in their cartography. 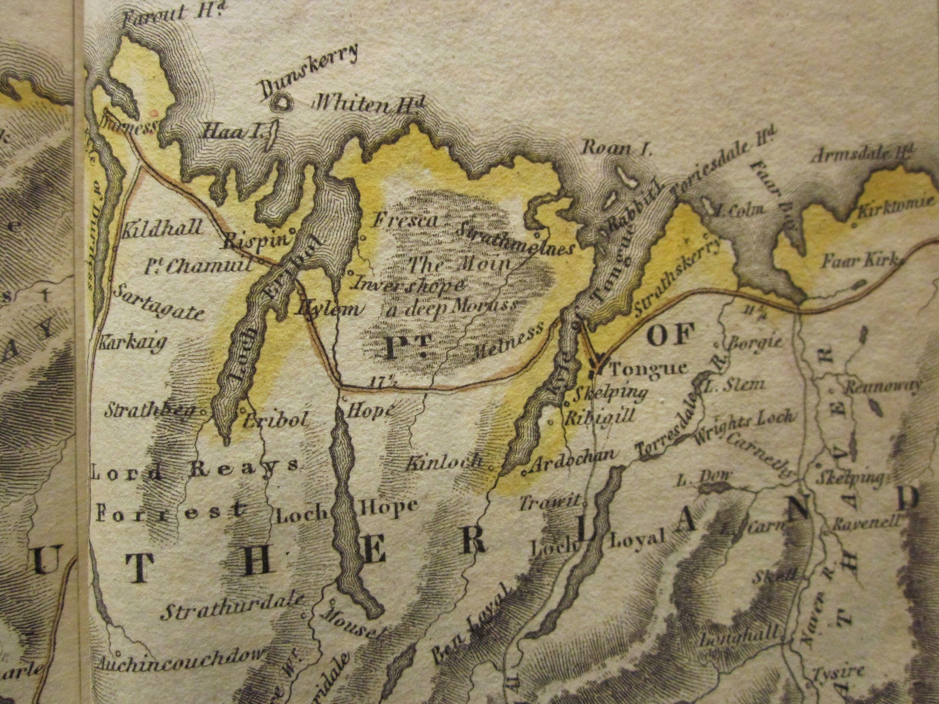 “The Moin, a deep Morass”, from The Travelling Map of Scotland, published by P Hill c.1820. The road shown is not that built by the Duke of Sutherland, but rather an old drover’s track that ran below Ben Hope

Once the Duke of Sutherland's road was in place, the area lost its menace, and was not worthy of a mention. But it is now back in the news, with the possibility of a Satellite Launch Station being built there on the coast.

Whilst I understand the need for a remote location for such a facility, and see the need for employment in the area, I can't help feeling that such precious wilderness needs to be protected at all costs. There is nowhere else in Britain where one can find such magnificent isolation. I suspect, too, that however much he hated the terrain, the Reverend MacDonald would not have wanted a Satellite Launch Station either!