The story of Dr Isabel Frances Grant, founder of the Highland Folk Museum Matthew Withey tells the story of the extraordinary woman whose lifelong interest in collecting led to her amassing the collections which now form the Highland Folk Museum.

In 2017 the Highland Folk Museum welcomed more than 70,000 visitors to its site in Badenoch in the beautiful Cairngorms National Park. The museum is an important centre for ‘living history’, where visitors experience the daily lives and surroundings of ordinary Highlanders over a 250-year period from 1700 to the middle of the 20th century.

These everyday stories are interwoven with displays of historic buildings and traditional Highland objects from a renowned collection of furniture, tools, farming implements and machinery, horse tackle, cooking and dining utensils and vessels, pottery, glass, musical instruments, sporting equipment, weapons, clothing and textiles, jewellery, books, photographs and archive papers with accounts of superstitions, stories and songs, and home-crafted items of every shape and description, including basketry, Barvas ware and treen.

One story that should be more widely known, though, is that of our founder: the extraordinary Dr. Isabel Frances Grant MBE LL.D (1887-1983). Grant was an ethnographer and social historian, and it was she who amassed the collections that now form the basis of the Highland Folk Museum. 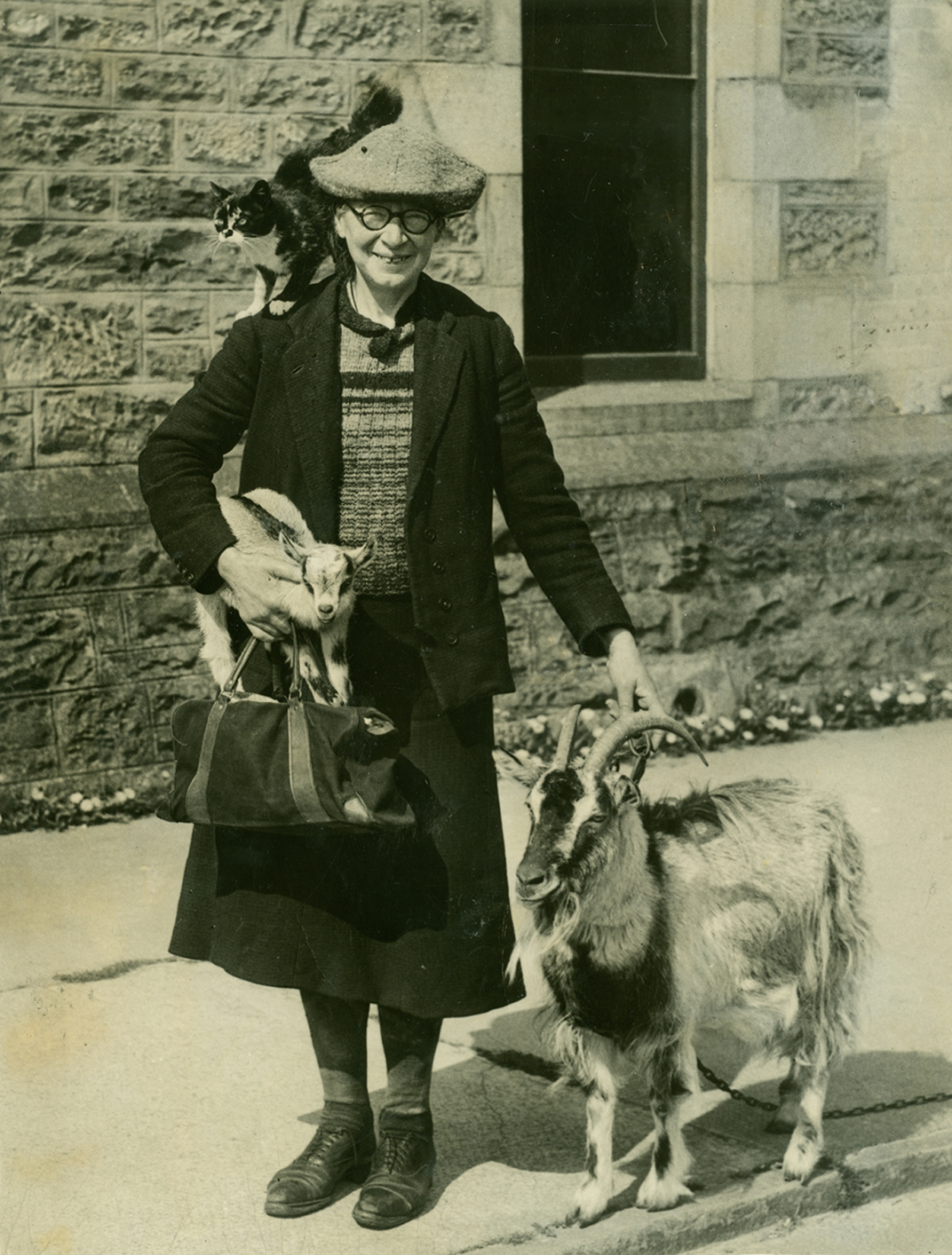 She was born in Edinburgh on 21 July 1887, but grew up with a strong sense of kinship to the Scottish Highlands and especially the area around Strathspey, with its ancient links to the Clan Grant. A family member of the Grants of Tullochgorm, and daughter of a colonel in the Seaforth Highlanders, she was sent to London and the care of her grandfather Field Marshal Sir Patrick Grant, Goldstick-in-Waiting to Queen Victoria, and his daughter Miss Frances Gough Grant - known as 'Aunt Fan' - when her parents were posted to India.

It was Aunt Fan who accompanied the young Isabel on early visits to museums and art galleries in London, inspiring a life-long interest in material culture and collecting. Later visits to folk museums in Scandinavia encouraged her to dream of a museum for the Highlands that would preserve and promote a better appreciation of the rapidly disappearing Gaelic traditions of northern and western Scotland.

Grant was also important as an academic and author. Her writing career was encouraged by John Maynard Keynes, who published a number of early articles in The Economic Review from 1912 onwards - with two appearing under Grant’s own name in 1926 and 1928. A Keynesian approach to social and economic history is evident in her first book, Every-Day Life on an Old Highland Farm, 1769-82, published in 1924.

Books such as The Social and Economic Development of Scotland before 1603 (1930) and The Lordship of the Isles (1935) established Grant as a respected voice in the fields of ethnography and social and family history in Scotland, and an important contributor to the optimistic sense of cultural renewal that was awakened in her homeland as the modern Scottish Renaissance grew and developed during the 1930s and the decades after the Second World War.

Her work was instrumental in helping to establish the Scottish Highlands as a serious subject for modern scholarship. Other publications included: Everyday Life in Old Scotland (1931); In the Tracks of Montrose (1931); The Economic History of Scotland (1934); The Clan Grant: the Development of a Clan (1955); The MacLeods: the History of a Clan, 1200-1956 (1959); the magisterial and hugely influential Highland Folk Ways(1961); The Clan MacLeod: with their Rock-built Fortress they have Endured (1966); Angus Og of the Isles (1969).

But it was the Highland Folk Museum that would provide Grant’s most popular and enduring legacy. In 1930 she organised and curated the Highland Exhibition at Inverness Town Hall, with some 2,100 artefacts gathered together and exhibited as a 'national folk museum'. Then in 1932 she helped stage The Scottish People: A Masque of Sir Walter Scott's Characters at the Usher Hall in Edinburgh to mark the centenary of the author’s death. The profits from this event went to the founding of a lectureship in Scottish literature at the University of Edinburgh, the organising committee noting that:

“…it is evident that Scots Literature, so fine, so individual and so essentially of the race, cannot receive the attention it is entitled to in a Scots university in the already fully crowded curriculum of the English course. To supply a lectureship specially devoted to the subject would not only do much to make our national heritage available to the rising generation, but would surely be the memorial most fitting to one who was not only a writer of world-wide fame, but was essentially and distinctly a Scotsman”.

Grant founded the Highland Folk Museum in 1935, using a personal legacy to acquire a disused former United Free Church on the island of Iona. Nicknamed Am Fasgadh (Gaelic for ‘The Shelter’), the Highland Folk Museum's remit was “…to shelter homely ancient Highland things from destruction [and] to show different aspects of the material setting of life in the Highlands in byegone days”. Grant collected assiduously to that end, and by 1938 the collection had outgrown its first home. In 1939 the museum moved to larger premises on the mainland at Laggan: a village in Badenoch in the central Highlands, where Am Fasgadh was sited for the next five years.

The outbreak of the Second World War, and resultant restrictions on movement along the west coast and islands of Scotland, meant that Grant was unable to collect during this period, while petrol shortages contributed to a general reduction in the numbers of visitors to the museum. In 1943 she purchased Pitmain Lodge, a large Georgian house, together with three acres of land near to the train station at Kingussie, about twelve miles east of Laggan, and on 1 June 1944 the Highland Folk Museum opened once again to the public.

The site at Kingussie enabled Grant to develop a suite of replica buildings: including an Inverness-shire cottage, a Lewis blackhouse and a Highland but-and-ben. These buildings and the use of ‘live demonstrations’ to interpret exhibits for visitors sealed the Highland Folk Museum’s popular reputation as the first open-air museum on mainland Britain.

The museum’s profile within the great population centres of Scotland was raised by two important exhibitions piloted by Grant in Edinburgh and Glasgow in the late 1930s. A show of material culture from the Am Fasgadh collections, organised by the recently-formed Saltire Society (founded in 1936) at Gladstone’s Land in Edinburgh, was followed by Highland Homestead – a hugely-popular showcase curated by Grant for the Scottish Pavilion at Glasgow’s Empire Exhibition in Bellahouston Park in 1938. These exhibitions helped to establish the Highland Folk Museum’s reputation internationally, and the profile of the museum remains gratifyingly global to this day.

Its eighty-acre site at Newtonmore – which includes the purpose-built Am Fasgadh collections storage facility opened in 2014 – welcomes visitors from around the world, and in 2015 the museum received official ‘Recognition’ from Museums Galleries Scotland and the Scottish Government as a ‘Nationally Significant Collection’.

The University of Edinburgh awarded Isabel Grant an honorary doctorate (LL.D) in 1948 for the creation of the Highland Folk Museum, and in 1959 she was made a Member of the Most Excellent Order of the British Empire (MBE) for her contributions to scholarship. She retired in 1954, and ownership of the Highland Folk Museum passed to the ancient Scottish universities (Aberdeen, Edinburgh, Glasgow and St. Andrews).

Highland Regional Council took over its running in 1975, and in 2011 responsibility for the museum and its collections was handed to High Life Highland – an arm's-length charity formed by the Highland Council to develop culture, health and wellbeing, learning, leisure and sports across the region.

The museum continues to thrive as a vibrant centre for the appreciation and study of Highland culture, and has recently partnered Historic Environment Scotland on the development of research projects looking at the use of traditional building materials, the development of vernacular building types and styles in northern and western Scotland and the heritage and material culture of traveller communities in the Highlands.

Dr. Isabel F. Grant continued to publish late into life, her home on the ground floor of 35 Heriot Row in the New Town of Edinburgh becoming a popular meeting place for the capital's academics and young scholars. She died in Edinburgh on 19 September 1983, and is buried at Dalarossie in her beloved Strathspey.

Find out more about the Highland Folk Museum on its website.

Do you love exploring Scotland's rich history? Every issue of History Scotland magazine is packed full of news, articles, interviews and research you can't read anywhere else. Find out more here.