When the granite statue of the 5th Duke of Gordon was unveiled in Aberdeen’s Castlegate in 1844, Aberdeen painter James Giles claimed it was the first granite statue since Ancient Egypt. The statue was designed by Edinburgh artist Thomas Campbell but carved by two local granite workers, Alexander Chalmers and James Mann.

The Aberdeen Journal predicted that granite would become the favoured material for figurative statues to the “great and the brave”. It never happened, even with the advent of pneumatic drills in 1895.

In the early years of the 20th century a proposal was made to erect a statue to the King, Edward VII, in Aberdeen and for that statue to be a granite one. The stone chosen was to come from Kemnay Quarry, the thinking being that the stone was the nearest in look to marble.

Initially it was to be done in two pieces since it was thought that a big enough stone (around 20-ton) couldn’t be lifted from the depths of Kemnay Quarry, which at the time was around 300 feet deep. Aberdeen granite workers in Barre, Vermont heard about this and said that they would send over a single block from America at their expense, shaped and ready to be carved. This seems to have irked the Aberdeen men who determined to raise a single block from the quarry floor. This they did in December 1911 with strengthened machinery and the whole of Kemnay turning out to watch. The instruction from the foreman as they manoeuvred it to the top of the quarry was “tak her canny noo, boys, tak her canny.” A specially-sourced railway wagon was brought from the south, and railway bridges on the route to Aberdeen were strengthened.

The King’s statue, as with the earlier Duke’s one, was designed by an artist, Alfred Drury, and it was carved in great detail by a humble granite worker, James Philip (born c. 1869) from Arthur Taylor’s yard in Jute Street. The statue was eventually sited at the junction of Union Street and Union Terrace, Prince Albert’s earlier statue having been shunted to the other end of the Terrace. 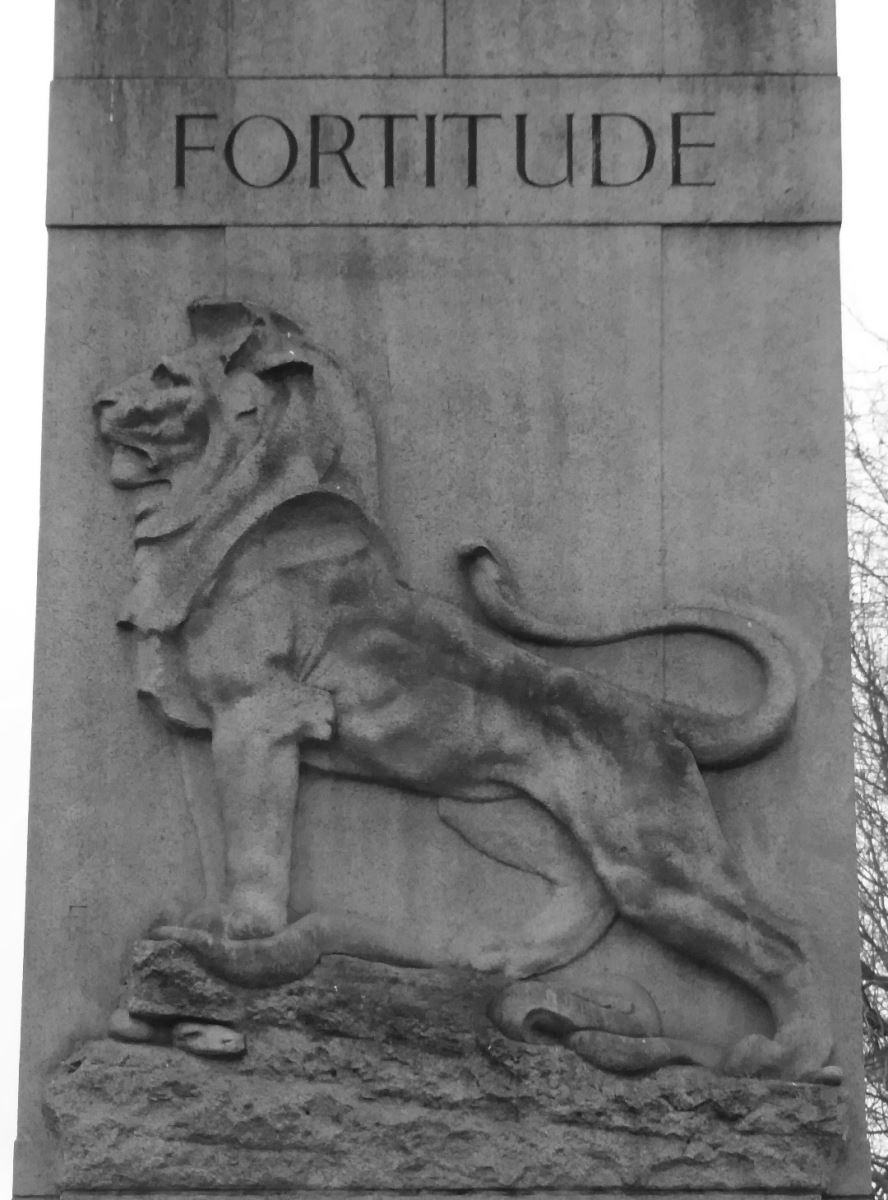 James Philip was one of the finest, if not the finest, granite carver in Aberdeen. He was born in Woodside but moved to Bucksburn, from where he initially walked the four miles to Taylor’s yard, four miles back, every day during his apprenticeship. Such was his ability that he was sent down to London to carve part of the prestigious monument to British nurse Edith Cavell, executed by the Germans in 1915.

This monument is sited just off Trafalgar Square near to St Martin-in-the-Fields. Philips carved the British Lion crushing the snake of German militarism. It is in Cornish granite and Philip said that he carved it “in a Cornish quarry hole.”

He went on to carve eight of the twelve figures for the Titanic Memorial in Liverpool, this time in a Manchester sculptor’s yard. Back in Aberdeen he carved the lion on the Aberdeen War Memorial, to the design of the Aberdeen artist William Macmillan, who also designed the War or Victory Medal.

Philip himself considered the figure on the Inverurie War Memorial to be his finest work. This superb figure of a Gordon Highlander is sculpted in pink Hill O’ Fare granite but according to Aberdeenshire War Memorial expert, Colin Johnston, Philip played a trick on the Gordon’s. The figure has his kilt apron stop an inch above the kilt itself, and that is the way the Seaforth Highlanders wore their apron, not the Gordons. Colin says that James Philip was a Seaforth!

The issue of the credit given to men like James Philip is one discussed further in my book The Granite Men, as is the late 19th/early 20thcentury controversy over whether or not granite should be used at all in figurative sculpture, especially to the level of detail of the King’s statue. This debate involved men like Colonel Innes of Learney, historian and writer J. M. Bulloch, and artist Pittendrigh Macgillivray. War memorials would not have been classed as figurative sculpture. 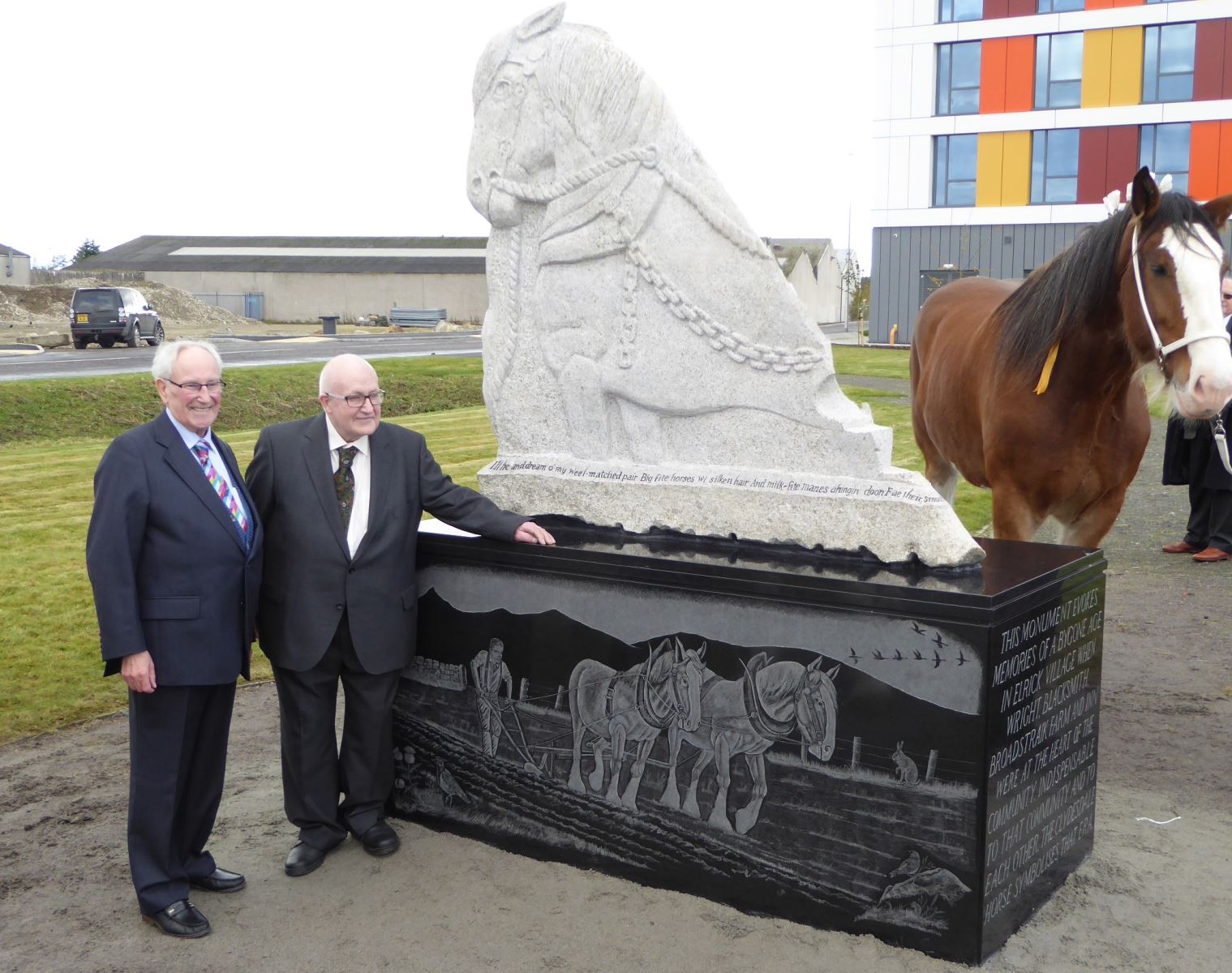 Bruce Walker (right on the opposite photo) is one man who combines the talents of granite men such as Chalmers, Mann and Philip with the artistic flair of Campbell, Drury and Macmillan. Bruce was schooled at Rhynie in Aberdeenshire where his interest in art was encouraged by dominie John Runcie.

In 1963 Bruce left school aged 15 and was soon apprenticed to the granite yard of William McKay & Sons in Holland Street. At that time evening classes were held for granite workers at Gray’s School of Art. These classes included drawing and lettering as well as stone carving and Bill McKay recognised early that Bruce had considerable artistic talent. He was to be trained as a draughtsman and from engraving on stone Bruce developed an interest in glass engraving and gradually found he could earn more doing that kind of work than he did in the granite yard. Bruce left the granite yard in 1975 establishing himself in a studio in Kikbuddo in Angus, later moving to Kirriemuir where he still works, as well as having a gallery in the town itself.

However, Bruce never left the granite work and continued to carve stone pieces, mostly on a smaller scale. Gradually he carried out some larger commissions, much larger ones! His most famous work to date was the massive Scott-Wilson Memorial in Glen Prosen, near Kirriemuir. This commemorates the Antarctic expedition of Captain Robert Falcon Scott and Doctor Edward Wilson.

Carved from a 20-ton block of Craigenlow granite it shows the men and their huskies and ponies and was unveiled in 2012. Then, in November 2017, Bruce completed a sculpture outside the new Hampton by Hilton Hotel in Elrick, seven miles west of Aberdeen. This is another large block of Craigenlow stone showing a Clydesdale horse, as well as a blacksmith’s and wright’s workshops. Round the base of the statue are engraved lines from J. C. Milne’s poem Nae Nowt For Me, relating to Clydesdales.

When I asked Bruce how he measured the lettering so that it perfectly fitted base he said quietly that he didn’t measure them, he just used the judgement of his eye! The polished black granite panels round the base are engraved with scenes of their working life, all of it harking back to the life in the village of Elrick in the first half of the 20thcentury.

Bruce is currently working on another block of 30-ton granite which is to commemorate the work of Airedale dogs during World War I. The dogs were first trained near Carnoustie where the monument will be sited.

A link then to the past of the granite industry in the shape of a unique man, one whose like we will surely never see again. 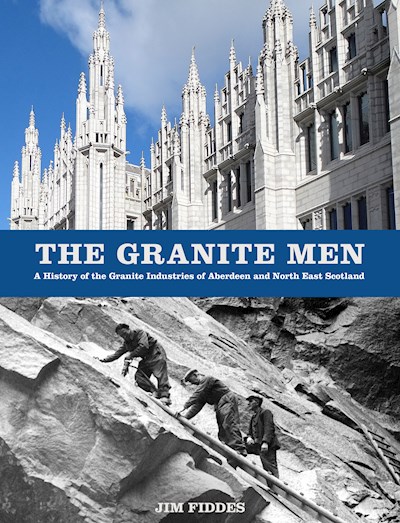 Granite is the most unyielding of building materials. The great granite quarries of the North East are silent now, as are virtually all of the 100 granite yards that existed in Aberdeen around the year 1900. Yet in its time, the granite industry of north-east Scotland was the engine that built civilisations. As early as the sixteenth century, granite from Aberdeen and its vicinities was building castles.

In the heyday of the mid-nineteenth century, the granite men of the North East hewed this material from the bowels of the earth and used it to fashion the iconic structures that defined the age. It paved the streets and embankments of London. It was used to build bridges over the Thames. It was carved into monuments for kings and commoners not only in Britain but all over the world. None of it possible without the men that toiled in those quarries and yards. This is the story of those granite men and their industry.

The Granite Men by Jim Fiddes is published by History Press and available from their website and from bookshops. For more information, contact Jim by e-mail.