Members of the public are invited to submit their views as Historic Environment Scotland consider granting listed status to a 20th-century wildlife mural by Alasdair Gray.

A mural by one of Scotland’s most celebrated writers and artists could soon be recognised with listed status, as Historic Environment Scotland (HES) announced it is seeking views from the public on proposals to list the Palacerigg Visitor Centre in Cumbernauld - which houses Alasdair Gray’s Scottish Wildlife Mural - at Category B due to the special architectural and historic interest of the artwork.

The Scottish Wildlife Mural, painted by Gray in the entrance foyer of the Palacerigg Visitor Centre in 1974, is described by HES as 'an accomplished example of 20th-century mural art and a major example of the artist’s work'. In its depiction of Scottish wildlife in an idealised countryside scene, alongside industrial landscapes, the artwork explores natural and human ecology and the place of humankind in the universe – themes which Gray revisited throughout his artistic and literary work. The mural also features many of Gray’s commonly used motifs, including the ‘Tree of Life’ and the embracing figures of Adam and Eve in the lower left of the scene. 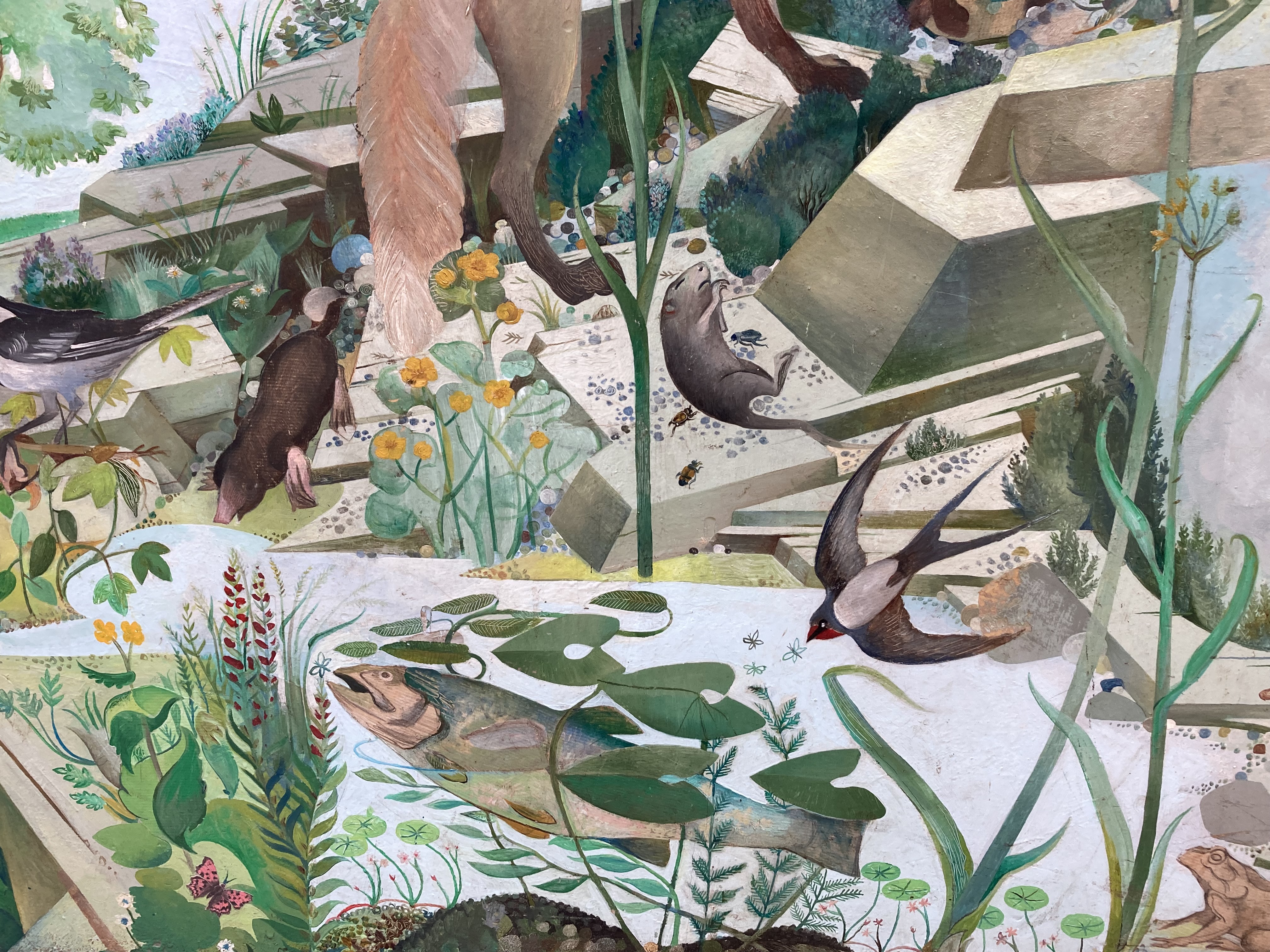 The mural was commissioned by naturalist, writer and journalist David Stephen, who was closely involved in the planning of Palacerigg Country Park and Visitor Centre and its emphasis on wildlife conservation and education. Gray lived on site with Stephen and his family at the Warden’s house while painting the mural, which is now among Gray’s earliest surviving public artworks. In 2001, Alasdair Gray and his assistant Robert Salmon carried out restoration work to the mural after it suffered water damage.

Although most famous for his writing, Alasdair Gray began as a visual artist and studied design and mural painting at Glasgow School of Art from 1952-1957. Following his graduation, he was commissioned to paint murals in and around Glasgow whilst making a living variously as an artist, teacher and writer. Alongside his book illustrations, Gray’s public murals are his best-known visual legacy today.

As the mural is embedded in the fabric of the Palacerigg Visitor Centre, the proposed listing would cover the building in order to protect the cultural significance of the mural itself.

Dara Parsons, Head of Designations at HES, said: “Alasdair Gray is one of Scotland’s most important cultural figures of the 20th century, and his mural at Palacerigg is significant both as a major example of a later 20th century public mural, and an important surviving example of his visual art which contains many of the themes and motifs he explored throughout his work.

“Listing is a way of recognising and celebrating what makes our built heritage special and ensuring this is taken into account in future decisions. We’re keen that people have an opportunity to have their say as part of this process, so we encourage anyone with an interest in the mural to take part in our consultation.”

The public consultation will run until 28 June 2022, and can be accessed via the HES website.

Members of the public are encouraged to send in their views and comments by emailing or contacting HES via the Heritage Portal.