A new archive making more than a century’s worth of records from Aberlour Children’s Charity accessible for the first time has been officially opened by a former resident.

Ron Aitchison, who spent his childhood in the care of Aberlour Orphanage in the 1950s and 1960s, welcomed the new catalogue created by the University of Stirling, by donating a number of his own items to the collection.

The archive is the result of a year-long project led by a team of University experts, who carefully restored, preserved and recorded hundreds of historic documents from Aberlour, including administrative records, case files, annual reports, photographs and issues of the charity’s magazine.

Now fully searchable and open to those who have personal or family connections to Aberlour and to researchers, the archive provides a detailed record of the organisation’s work caring for children across Scotland since the establishment of its first orphanage in 1875.

Ron, who arrived at Aberlour as a six-month-old baby alongside his seven older siblings, said: “I have been in touch with Aberlour Children’s Charity for many years, however, for one reason or another, I had never reached the stage of handing over my archive. When Aberlour said they were giving their archive material to the University of Stirling, I was very keen to be involved in that.

“I was keen to hear that the student body, in the generations to come, will be able to access Aberlour’s and my own archive – I felt that was quite an important thing to do. It’s also a legacy for my children; they know very little about their father’s upbringing.”

Ron was born in Edinburgh and spent fourteen years at the old Victorian Institute. He went on to have a successful career in the automotive industry and moved back to the Aberlour area in his late 50s, where he lived with his wife for 12 years. In partnership with Aberlour Children’s Charity, he has given numerous talks about his life and experiences in the old home and, as a result, received donations of photos and stories from others connected to Aberlour, eventually amassing a large collection of Orphanage materials, which he has now donated to the University Archive.

Ron added: “When I look at the material that I have, some goes back to the 1920s and one item, goes back to 1871. There’s one particular file where you can more or less follow my route through orphanage life, from beginning to end. It’s a very important and personal document to me, but it’s something I’m pleased to share with the University.

“I am very pleased to see the archive open and to officially hand over the material I have.” 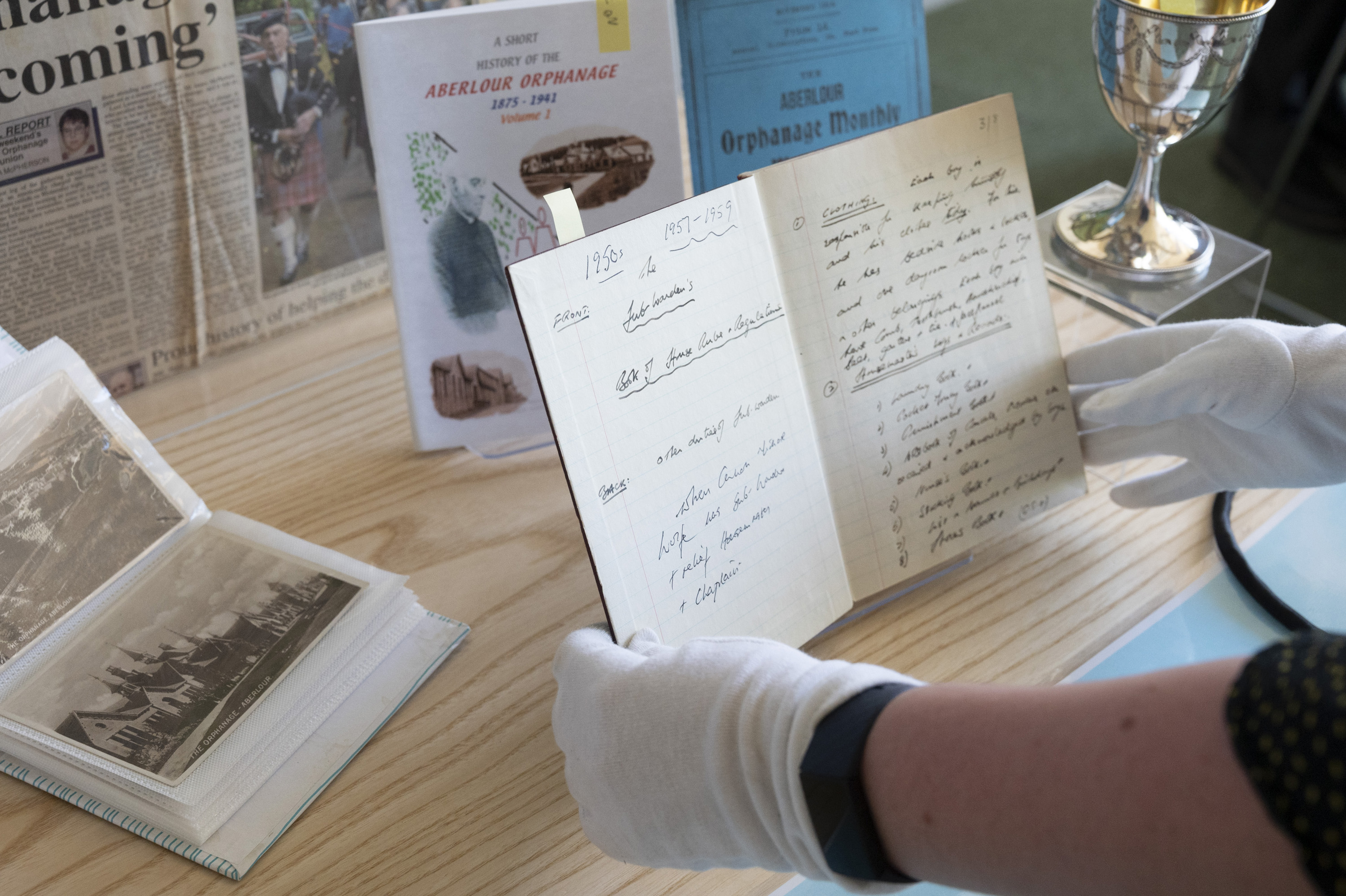 SallyAnn Kelly, Chief Executive of Aberlour Children’s Charity, said: “We often speak to people who have been brought up in the care system, or have some experience of care, and they often don’t have much of a written record of what their life was like. The archive really provides people looked after at Aberlour with the fullest possible account of their life.

“The partnership we have with the University is very important to us – both from a preservation of archive perspective but also for the long-term learning of students in health and social care.”

“The archive now allows a full and detailed record to be available for those seeking to find out more about their time in care. This new resource will also bring significant benefits for the research community, contributing to improvements in both record-keeping and social care, with the history of Aberlour brought together in one place for the first time.”

The cataloguing of the Aberlour Children’s Charity Archive was funded by a £26,954 grant awarded by Archives Revealed – a partnership programme between The National Archives, The Pilgrim Trust and the Wolfson Foundation, which is the only funding stream in the UK dedicated to cataloguing and unlocking archives.

The Aberlour Children Charity’s Archive can be accessed via the University of Stirling website.