Christmas on a Scottish island in the Sixties 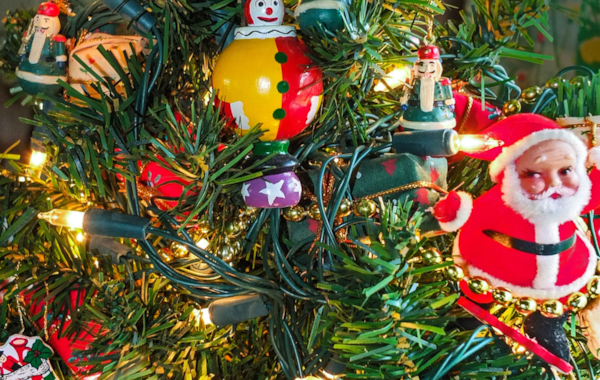 Christmas on an island in the 1940s

Goose fat in a jar. ‘Why on earth would anyone want goose fat?’ I wondered the first time I saw it in Sainsburys a few years ago. For me, goose fat triggered memories of 1960s and 1970s Christmases at home in Arran.

We lived on a hilltop Arran croft, right at the hindmost end of the more remote parts of the island; the ‘far side ‘in more senses than one.

On Christmas Day, as on every other winter’s day, Dad would be feeding cows in the byre; hauling hay and cow-cake and beet-pulp out to the beasts in the back field. Just as the rest of us, in our pyjamas, cuddling our presents, were cuddling into the kitchen (it was the only warm room in the house, thanks to the ancient Raeburn stove), Dad would blow in the back door, and with him, a whirl of dirt, an icy blast and the stink of the byre.

In his mucky black, unravelling woollen balaclava with pinched ruddy cheeks, Dad looked like some medieval anti-Christmas troll. But with his childlike sense of fun he’d stretch out to us for a cuddle then put his freezing cold mitts on our bare back, making us squeal and shiver with cold and delight.

That night before, at teatime on Christmas Eve, Dad would have warned us that if he got woken up by some old white-haired ‘beggar’ clambering about on the roof looking for a chimney he was going to get out his shotgun! As a child I used to lay there worrying about Santa.

When I think back, our preparations for Christmas did bear some resemblance to the norm but like the butterfly effect, everything was just slightly altered from the usual.

Our Christmas tree in 1971 is a case in point. My brother, aged eleven at the time and fired up with a sense of adventure, decided he would take responsibility for getting us a tree. This had to be a cover operation, since he wasn’t planning to buy it. He’d have to cycle a mile and clamber up to the next-door farmer’s newly planted forest to find a suitable tree. That year’s Christmas tree looked almost as it if had fought, and lost, an epic battle: first Iain had tried to saw it and had given up, so he had restored to wrenching it from the ground.

By the time it reached home, this four-foot Christmas tree was looking very sorry for itself with broken roots trailing, strangely needle-stripped branches. Undaunted, Iain proudly propped his puny, wee, misshapen tree in the corner of the sitting room with the bushiest bits facing outwards and my sister and I helped to decorate it.

QUICK LINK: Best ever Christmas in 1944