Explore the history of the Covenanters with these five sites that acted as prisons during the ‘killing times’.

Explore the history of the Covenanters with this with these five sites that acted as prisons during the ‘killing times’.

Who were the Covenanters?

Simply stated, the Covenanters were those people in Scotland who signed the National Covenant in 1638, to confirm their opposition to the interference by the Stuart kings in the affairs of the Presbyterian Church of Scotland.

The Stuart kings believed in the Divine Right of the monarch. Not only did they believe that God wished them to be the infallible rulers of their kingdom, they also believed that they were the spiritual heads of the Church of Scotland. This latter belief could not be accepted by the Scots to whom no man, not even a king, could be spiritual head of the church.

This was the nub of the entire Covenanting struggle. The Scots were, and would have been, loyal to the Stuart dynasty but for that one sticking point, and from 1638, when the Covenant was signed, until the Glorious Revolution - when Prince William of Orange made a bloodless invasion of Great Britain in 1688 - a great deal of suffering, torture, imprisonment, transportation and executions would ensue.

Find out more about the Covenanters on the Association’s website.

The castle on the Bass Rock was used as a prison during the time of the Covenant. The rock was sold to the government for £4,000 in 1671 by Sir Andrew Ramsay, Provost of Edinburgh. It was then converted into a state prison for Covenanters and between 1672 and 1687, 39 Covenanters were imprisoned here.

Location: The Bass Rock is a rocky islet in the Firth of Forth, north of North Berwick. Access is by boat, and boat trips can be arranged in North Berwick. 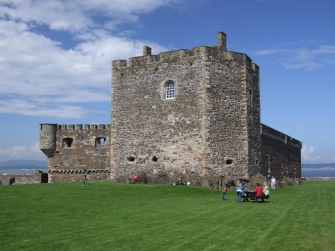 Blackness Castle was used as a prison during the years of the Covenant, particularly in the 1670s and 1680s. On 3 June 1680 soldiers from Blackness Castle went to Queensferry and tried to arrest Henry Hall of Haughhead and Reverend Donald Cargill, who were at a house in Covenanter Lane. Although Hall was arrested, Cargill managed to escape.

Location: The castle is regularly open to the public. Website. 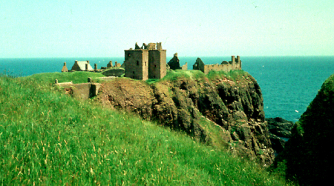 In 1685 a rebellion was expected in southern Scotland so the authorities decided to send hundreds of Covenanter prisoners held in Edinburgh jails north, to be held at Dunnottar, to prevent them being set free by their local supporters.

The Covenanter were marched north in terrible conditions and held in a vault of Dunnottar Castle, later known as the Whig's Vault. Some 167 Covenanters were held in the single apartment, which had little access to fresh air and no facilities. A number died, and an attempt at breaking out resulted in more people dying.

A few Covenanters who died here are buried in nearby Dunnottar churchyard. After a period of confinement, most of the Covenanters were sent to America as slaves.

Location: Dunnottar Castle is located on the east coast of Scotland, to the south of Stonehaven. The castle is regularly open to the public. For details on access times and admission prices, please consult the castle's website. 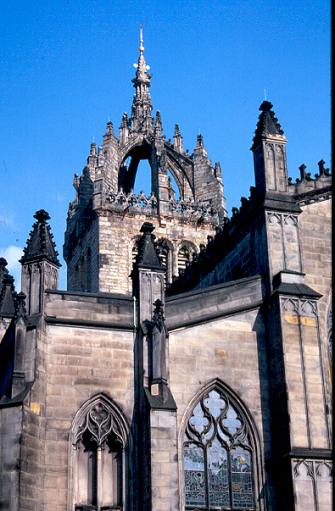 The High Kirk of St Giles in Edinburgh has many associations with the Covenanters, including:

It was in St Giles Kirk on 23 July 1637 that Jenny Geddes stood up in front of the dean, Reverend James Hannay, when he started to read from Laud's Liturgy that started the period of Covenanter oppression.

There is a copy of the National Covenant in the church.

Location: Often referred to as St Giles' Cathedral, this is the principal church in Edinburgh.

The church is regularly open to the public. For more information, visit the website. 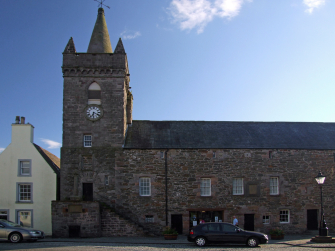 During the Covenanting period, Kirkcudbright Tolbooth was used as a place of imprisonment. The building was erected between 1625 and 1629 as the tolbooth, perhaps incorporating an older building, described as ‘ruinous’. It incorporated a council meeting room, burgh & sheriff court and prison.

The number of Covenanters held in the jail is unknown, and we only get snippets from various accounts. However, it is known that John Neilson of Corsock was held at the tolbooth for a time, having been arrested for allowing a number of ministers to preach in his home. He was fined £2,000 Scots and later executed in Edinburgh on 14 December 1666.

Taken at Auchencloy and held in the tolbooth prior to trial were William Hunter and Robert Smith. Their grave is in Kirkcudbright cemetery.

Location: Kirkcudbright Tolbooth is located at the corner of the High Street. It is now the Tolbooth Art Centre, and is open to the public. For details of opening times, visit the centre's website.

The Scottish Covenanter Memorials Association was established in 1966 with a view to preserving the many memorials which date from the “Killing Times” of 1638-88. The membership of the association totals approximately 400, and all members are volunteers.

Many members visit and care for the memorials, carrying out simple cleaning and tidying operations. More difficult, technical work is carried out by professional sculptors, who are paid from the association's funds.

For more information, to browse the monuments and gravestones, or to join, visit the website.

All information and images courtesy of and © Scottish Covenanter Memorials Association with the exception of the Bass Rock image, which is © Astronautilus.