Mary Queen of Scots facts in numbers relating to her life in France, her reign in Scotland and her imprisonment in England.

We take a look at Mary Queen of Scots facts through numbers which relate to her life in France, her reign in Scotland and her imprisonment in England.

23 – The age Mary was when she gave birth to her son, the future King James VI of Scotland 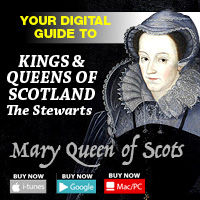 6,000 – The number of Mary’s troops at the Battle of Langside in which she was defeated by a force of 4,000 under the leadership of her half-brother the Earl of Moray, acting on behalf of Mary’s son

19 – The number of years Mary spent in captivity in England

2 – The number of publicly accessible Mary Queen of Scots statues in Scotland – at Annet House, Linlithgow, and Linlithgow Palace